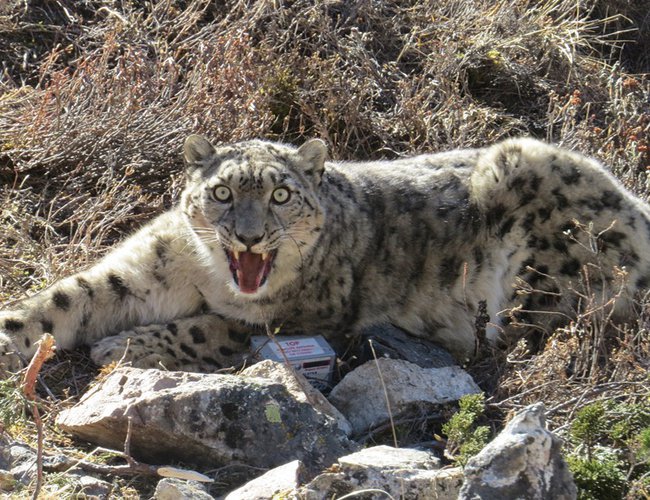 Captured at 4171 meters in Charkarbo, the first snow leopard was named Zeborong after the local Snow Leopard Conservation Committee in the region. This handsome mammal weighs 38 kgs. Meanwhile, locals chose to name the second one Shyamling. Shyamling Gumba happens to be the oldest monastery in Dolpa and this is how this elusive creature got its name. Shyamling was captured at 3885 meters in Ngyong and weighs 33 kgs. Both the adult males were captured inside the park and fitted with a satellite-GPS collar and, released back into the wild an hour later.

According to WWF Nepal, “The Western Himalayan Landscape is a priority landscape, with Dolpa having the largest snow leopard population in Nepal. And the use of satellite telemetry collaring in research and monitoring will help in the conservation of these iconic species in the landscape,” stated Dr. Bishwanath Oli, Secretary, Ministry of Forests and Environment.

Meanwhile, Gopal Prakash Bhattarai, Director General, Department of National Parks and Wildlife Conservation stated that, “The data generated from these collars will be crucial in understanding the spatial ecology of snow leopards in this landscape while also bridging the existing information gaps in the Western Himalayan Landscape.”

This is the first time that a satellite telemetry expedition has been undertaken in the Western Himalayan Landscape, after Wildlife Biologist, Dr. Rodney Jackson’s scientific radio collaring mission in the 1980’s to track snow leopards and learn about their habitats.

Following the collaring, both Zeborong and Shyamling will be closely monitored by the government, and conservation biologists. With almost no data from this terrain, conservationists are hopeful that the information received from the recent collaring, almost 40 decades later will help determine snow leopard movement patterns, habitat use and preferences, and home ranges in western Himalayas to identify critical habitats and corridors between them, including trans-boundary habitat linkages and climate resilient habitat for future conservation.

Dr. Ghana S. Gurung, Country Representative of WWF Nepal said, “With growing infrastructural development across the country, information received from the collaring will be key in identifying implications of linear infrastructure in snow leopard habitats, human-snow leopard interface and mitigation measures. Furthermore, besides contributing towards the Global Snow Leopard and Ecosystem Protection Program (GSLEP), the data will also help determine how snow leopard conservation moves ahead in Nepal in the face of climate change.”

The collaring expedition was led by the Government of Nepal in partnership with WWF Nepal, National Trust for Nature Conservation, and citizen scientists from the local Snow Leopard Conservation Committees. WWF-UK, WWF Belgium, WWF Canada and WWF Australia, WWF Nepal provided financial support for the collaring.

Rhino Population Increases In Bardiya Park By Agencies 3 months ago

I Miss My Friends In Langtang Every Day... But Today I’m Missing The Langtang Glaciers Too. By Austin Lord 5 months, 2 weeks ago

Two-fifths Of Plants At Risk Of Extinction By Agencies 6 months, 2 weeks ago