Nepal attended CoP25, CMP15 and CMA2 under the leadership of Shakti B. Basnet, Minister for Forests and Environment. 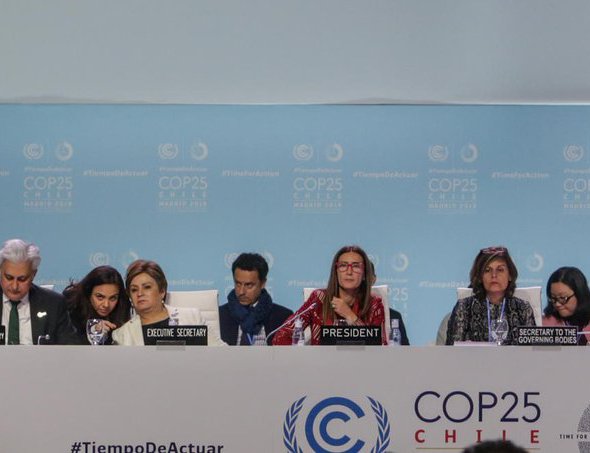 Climate change communities remember 2019 as the 'hottest year' and a year widely celebrated as 'Friday for future (3F)'. The '3F', initiated by a 16-year old Swedish girl Greta Thunberg in September 2018, drew world-wide attention. She called for declaring 'climate emergency', and urged all to commit for climate actions and 'vote for planet & future generations'. Over 11 million people have joined '3F' campaign. Greta drew the attention of political leaders through statement on 23 September in New York and 11 December in Madrid 2019 and also said 'you will die of old age and I will die of climate change'. She has repeatedly urged climate negotiators and politicians to follow 'science'. She reminded the international community that USD 1.9 trillion has been invested in fossil fuels after Paris Agreement, and called for 'real action' in cutting greenhouse gas (GHGs) emissions. Time magazine has honoured her as 'TIME's 2019 Person of the Year'.

Nepal attended CoP25, CMP15 and CMA2 under the leadership of Shakti B. Basnet, Minister for Forests and Environment. In the high-level segment, Minister Basnet informed the provision of the Climate Change (CC) Policy to channel over 80 percent of climate financing to grassroots activities, initiation of National Adaptation Plan (NAP), nearing completion of the disaster preparedness and response plans for all municipalities, 80 percent electrification by 2050, and budget allocation for e-mobility in 2019, including mitigation-friendly policies. He urged Parties to make progress on enhanced transparency framework, advance 2017 work programme on agriculture, finance loss and damage, and assure responsible and accessible financing, pragmatic technology transfer, and bottom-up capacity-building as priorities. Hon'ble Minister invited all to visit Nepal during Visit Nepal 2020, and participate in 'Sagarmatha Sambaad' on climate change, mountains and the future of humanity' on 2-4 April 2020. He also invited Ms. Patricia Espinosa, UNFCCC Executive Secretary to attend the Mt. Everest Dialogue.

Nepal also attended, inter alia, ICIMOD-organised events in Madrid that informed climate negotiators that 'even 1.50C increase in temperature is 'too hot' for the Hindu-Kush Himalayas (HKH) and will lead to the loss of one-third of the region’s glacier volume by the year 2100' based on its first HKH Assessment report, including an event on the HKH call to action on International Mountain Day (11 December). Nepal organised a discussion on addressing climate change and mountain issues through enhanced Nationally Determined Contribution (NDC) and a press conference on Nepal's agenda and status in CoP25 on 7 December 2019.

It is good to put in record that the draft CC Policy (2019) changed 2011 policy provision on channelling of 80 percent climate finance provision. Repeated urge to build the policy on learning (https://www. spotlightnepal.com/2019/03/30/climate-change-policy-draft-building-learning/), government finally re-included this provision in 2019 CC Policy and this was included in Nepal's statement in Madrid. The Policy has made several provisions on adaptation and mitigation, and made commitment to send the Third National Communication Report to the UNFCCC Secretariat by 2019.

In CoP25, it seems that Nepal's delegation did not prioritise 'adaptation' for negotiation. After nearly two and half-decade on CC negotiation, Nepal put 'adaptation at the crossroad'. Statement in the high-level segment indicates initiation of NAP. Nepal initiated NAP formulation process in 2015 when only three countries prepared, expedited the process in 2016 in collaboration with Practical Action and secured, as a first country, USD 2.95 million from Green Climate Fund in 2016. Delay in national process in channelling GCF support, Nepal's statement did not recognised previous efforts and included only 'initiation of NAP process' Seventeen countries have shared NAP as of 3 December 2019. Nepal's effort was effective, inter alia, to influence the adaptation community in engaging multi-stakeholders and approach of vulnerability and risk assessment in NAP formulation process till mid-2017. Over two years of 'dormant stage' has sufficiently delayed the NAP process.

Under the coordination of Bhutan (Chair of the LDC Coordination Group for 2019 & 2020), some developed countries (Austria, Denmark, Finland, Germany, Ireland, Sweden and UK) and LDCs (Bhutan, Ethiopia, Malawi, The Gambia and Uganda) signed LIFE-AR (LDC Initiative for Effective Adaptation and Resilience) partnership on 11 December 2019 in Madrid. This initiative aims to develop LDC vision for adapting towards a climate resilient future by 2050. It seems, Nepal did not join this partnership whereas it is active in NDC partnership. In general understanding, NDC focuses on GHGs reduction. Based on Second National Communication report (2014), Nepal's share on GHG emission is only 0.027 percent of the global total emissions.

One of the objectives of the Paris Agreement is to increase 'ability to adapt to the adverse impacts of climate change and foster climate resilience'. Nepal has repeatedly informed the international community on her climate vulnerability and support required to help climate vulnerable poor people to adapt and build resilience to climate change impacts. In Madrid, developed countries have pledged close to USD 90 million for Adaptation Fund which has direct access modality. Nepal may wish to access this fund for climate change adaptation in addition to LDC Fund and Green Climate Fund. As of now, Adaptation Fund has perennial source of replenishment as it receives a 2% share of Clean Development Mechanism projects. If Parties agree it might serve as sustainable development mechanism of the Paris Agreement.

As Katowice decided on 'rule book' covering several areas for the effective implementation of the Paris Agreement, Madrid was expected to raise 'ambition to ensure the highest possible mitigation and adaptation efforts' with 'breakthrough decision' on markets and non-markets (carbon trade) and loss and damage. It seems that Madrid could not decide on key aspects required for effective implementation of the Paris Agreement in spite of extra days.. In a nutshell, negotiation will continue to respond the threats of climate change and Parties will also start adaptation communication, including NAP, NDC and national communication to provide input to the first global stocktake. Madrid could not deliver to the desired level and can be considered inefficient as many funded participants will face difficulty in attending negotiating meetings in extra days. As usual, it will continue to hold round tables on pre-2020 implementation and ambition as a part of Chile-Madrid Time for Action.

Two-fifths Of Plants At Risk Of Extinction By Agencies 4 months, 4 weeks ago