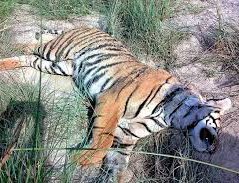 A Royal Bengal tiger was found dead in a community forest under Chitwan National Park in Parsa district, on Wednesday.

Chitwan National Park’s Chief Conservation Officer Narayan Rupakheti presumed that the tiger died in a fight with another big cat as per a preliminary investigation report.

A team including vets from the CNP would bring the dead tiger to Kasara, Rupakheti shared. Locals had informed the police after they came across the tiger carcass while cutting grass. “The tiger has bruises across its body”, he said, adding it might have been killed in fighting with another tiger. Postmortem on the tiger will be carried out today, CNP sources said.

Two-fifths Of Plants At Risk Of Extinction By Agencies 4 months, 4 weeks ago