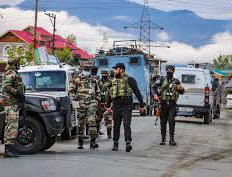 The darkest day in the history of Jammu and Kashmir was the intervening night of October 21-22, 1947, when Operation Gulmarg was launched in a bid to seize and destroy the territory, and 73 years have gone by, but Pakistan's template has remained the same, according to a European think tank.

European Foundation for South Asian Studies (EFSAS), in a commentary, recalled the horrors of the tribal invasion that left between 35,000 and 40,000 dead, besides, a grim mark on the fate of J-K.

"The day marked the first and most critical step in the erosion of the Kashmiri identity with the state and its people being torn apart by an UN-drawn LoC (Line of Control) that divides the erstwhile princely state and its inhabitants," EFSAS said.

According to the think tank, the Operation Gulmarg had been conceived as early as August 1947 under the command of Major General Akbar Khan (who recently spoke about this in a book).

Washington DC-based political and strategic analyst Shuja Nawaz has listed 22 Pashtun tribes that were involved in the invasion.

Besides General Khan, the other prominent person who planned and led the operation was Sardar Shaukat Hayat Khan, a close aid of Pakistan's founder Muhammad Ali Jinnah. Shaukat, later in a book, The Nation that Lost its Soul, accepted that he had been appointed supervisor of the Kashmir operation, adding that Rs 300,000 were given from the Pakistani treasury by then finance minister Ghulam Muhammad for this operation.

"Major General Akbar Khan fixed October 22, 1947, as the date on which the attack on J-K would be launched. All lashkars were asked to converge at Abbottabad near the border with J-K by October 18. They were moved in civilian buses and trucks that had been commandeered for this purpose... under the cover of night," the EFSAS said. According to the European think-tank, "Pakistan has perpetuated the myth that the tribal raiders were liberators and came to Kashmir to fulfill their religious obligation of jihad because Muslims were being killed in Jammu in communal riots.

However, the reality was that it was not as if Muslims had been spared (by them)." The intruders massacred about 11,000 residents of Baramulla on October 26, 1947, alone, and destroyed the Mohra power station that supplied electricity to Srinagar. Sheikh Abdullah, the first Prime Minister of J-K, described the invasion at the UN in 1948, saying: "The raiders came to our land, massacred thousands of people -- mostly Hindus and Sikhs, but Muslims, too -- abducted thousands of girls, Hindus, Sikhs and Muslims alike, looted our property and almost reached the gates of our summer capital, Srinagar".

As a result of the trampling of lives running in thousands, Maharaja Hari Singh appealed to India in a letter dated October 26, 1947, "With the conditions obtaining at present in my state and to the great emergency of the situation as it exists, I have no option but to ask for help from the Indian Dominion. Naturally, they cannot send the help asked for without my state acceding to the Domination of India. I have accordingly decided to do so and I attach the Instrument of Accession for acceptance by your government.

"The other alternative is to leave my state and my people to diabolical killers and beasts. On the basis of this, no civilised government can exist or be maintained. The alternative I will never allow to happen as long as I am the ruler of the state and I have a life to defend my country". In conclusion, the EFSAS called out those who tend to go for the Pakistani propaganda and its concern about the welfare of the Muslims in J-K: "They must not forget the policy adopted by Islamabad in October 1947, attempting to grab the territory by force, which dealt the greatest blow possible to the existence of J-K."

"The planners and perpetrators of the tribal invasion were, and remain, without doubt the foremost enemies of the Kashmiri people. The day the invasion began on October 22, 1947, has to be the darkest day in the history of the J-K," the European think tank said. ANI