I Miss My Friends In Langtang Every Day... But Today I’m Missing The Langtang Glaciers Too.

I Miss My Friends In Langtang Every Day... But Today I’m Missing The Langtang Glaciers Too. 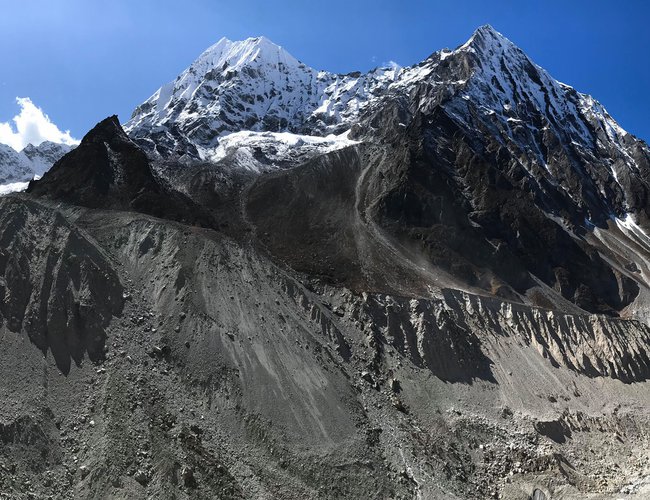 The Langtang Valley is both highly-affected by climate change and one of the most important sites for studying the effects of climate change in the Himalayan bioregion. I’ve spent the last week here in the Upper Langtang Valley with an international team of glaciologists and hydrologists - trying to understand the work that they do, the ways that climate change is affecting Langtang’s many glaciers and the hydrology of the watershed, and the ways that scientific research might lead to more meaningful engagements between researchers and ‘local’ people living in climate-affected regions.

I came away with many questions, a few ideas, an embodied appreciation for the many challenges of this kind of research, and an even deeper sense of awe for this landscape. It also just felt good to use my crooked legs and to wake up some different parts of my brain again (fyi, I have a masters degree in Environmental Science, have studied hydrology and geomorphology). There is a lot of work to be done - in Langtang as elsewhere, though particularly here in Langtang given significant risk of cryohazards - at the interface between physical and social sciences to help different societies face the multiple problems of climate change - especially with regards to communication and recognizing different forms of environmental knowledge. I’m trying to learn more about these issues in the Langtang Valley, from these scientists and from the Langtangpas, so as to help promote and facilitate better dialogue and collaboration.

But right now, after camping for four nights at 4200m and two nights at 4800m, I’m also just very grateful for the woodstove, the walls in Kyangjin Gompa, and my friends in Langtang who work to make life (and tourism and research) possible in this landscape.

More thoughts, photos, and analysis to come... in the short and long term. But for now a few photographs of five glaciers (just a few of the major glaciers in the Langtang Valley) that I came to know a little better this past week.

The massive Langtang Glacier lies at the end of the Langtang Valley, over 20km long. Like many valley glaciers in the Langtang region (and the broader Himalaya) this is a ‘debris-covered glacier’ - where the ice flows, shifts, and moves beneath a layer of rock, soil, sand, and other materials. At this point, the glacier is probably over 1km wide. The snout of the glacier and the outlet where the Langtang Khola begins is on the right side of this photograph. The peak of Langshisha Ri at 6,427m/21,086 ft is in the middle of the frame. (Photo taken at ~4600m)

He is an Anthropologist & Visual Ethnographer