Ending Extreme Poverty Through Responsible Finance: MFIs Could Be Instrumental

Nepal's financial sector has obviously become deeper and the number and type of financial intermediaries have grown rapidly over the past 30 years. There have been 155 Banks and Financial Institutions (BFIs), their branches being 9765 as of mid-July, 2020. 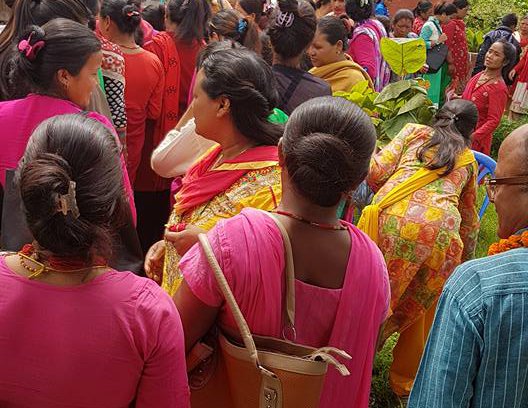 While billions enjoy an affluent style, more than a tenth of the world’s population lives in extreme poverty today. Poverty is not a consequence of limited global resources, but political and economic injustice together with violation of human rights. A large chunk of Nepal’s population is also trapped in extreme poverty over the years. Despite several initiatives taken and implemented by the government to curb poverty, Nepal still remains one of the poorest countries in the world. The burgeoning economic gaps have continued to grow as the very richest amass unprecedented levels of wealth. Dalit, marginalized, socially excluded indigenous communities and women residing mainly in inaccessible mountain districts and inner terrain parts of Nepal worst hit from sever poverty and hunger, are desperately waiting the year 2030 with the faint hope of getting rid of generational poverty and deprivation, for Nepal is committed to achieving UN Sustainable Development Goals (SDGs) i.e. end poverty and hunger and reduce inequality among others. Moreover, the 15th development plan of the government envisions reducing absolute poverty to zero by F.Y 2100/01 from current 18.7 percent and multidimensional poverty to 3 percent from 28.6 percent. It is heartening that a progressive constitution in many ways-envisions Nepal to be an egalitarian, welfare economy heading towards democratic socialism.

Given the scenario, if there is no meaningful political commitment, the dream of poverty eradication and formation of a just and equitable society remains just a dream for ever. Considering that the poor are natural- born entrepreneur and they have tremendous creative potential, there is a need to focus on sustainable and inclusive programmes that help the poor realize their full potential as entrepreneurs. To this, giving them the right environment and a little bit of help getting started is inevitable. Shortly before his death Mahatma Gandhi wrote “recall the face of the poorest and weakest person you have seen, and ask if the step you contemplate is going to be of any use to them”. Keeping in view the heart touching remarks of the legendary person, the poverty focused policies and programs designed so far needs revisit at the earliest to make sure that the targeted resources and different measures to protect and improve lives of the extreme poor effectively reach to them and they are making proper use of it. There can be no sustainable development without catering to these groups.

Viewed from the perspective of lifting extreme poor out of poverty and enable them to share equally the fruits of development, responsible finance among others could be one of the remedies. Responsible finance is a mission driven concept of increasing access to finance serving customers not supported by mainstream lenders. The situation in India’s federal state of Andhra Pradesh has further increased global attention to this issue, demonstrating the urgency of advancing the responsible finance discussion across all financial sectors, including microfinance.

Nepal's financial sector has obviously become deeper and the number and type of financial intermediaries have grown rapidly over the past 30 years. There have been 155 Banks and Financial Institutions (BFIs), their branches being 9765 as of mid-July, 2020. Currently 85 microfinance companies are playing a leading role in providing the microcredit services to the poor. Despite the growth of financial services, many poor people in Nepal still remain excluded from formal financial services access. Reasons for exclusion are numerous such as lack of financial service providers or lack of appropriate products and services to meet growing needs of clients. A rating assessment conducted by NRB – EAFS project showed that most microfinance institutions offer similar products under similar terms and conditions to a largely diversified client group. Additionally, there is a growing trend among Nepalese MFIs to focus on serving better end of the poor clients, thus neglecting the financial needs of the very poor potential clients.

The time has now come that all the existing BFIs have to act and behave in such a responsible manner that financial services reach not only to a handful of people but also equally to a large mass of people excluded or excluding themselves for several reasons either social or psychological. It is obvious that conventional banks are prejudiced against the poor, categorizing them as high risk clients or dealing with whom is an unprofitable proposition. Contrary to this, Bank Rakaia Indonesia (BRI), the largest commercial bank of Indonesia makes a huge profit providing financial services to the poor through opening a separate window called micro banking. Commercial banks of Nepal too therefore, have to play a role of making poor people bankable by massively undertaking financial literacy/education programs and giving banking services at their door steps either through brick banking or digital technology. A study found that “women in Nepal who were offered a simple bank account increased their total assets by 16%. In India, a government effort to open banks in rural areas helped cut rural poverty by up to 17 percentage points. When savings accounts were offered to female market vendors in Kenya, their daily expenditure increased by 37%, relative to a comparable group of women who did not receive an account”.

These facts show that formal financial service providers have a great role to play in poverty reduction. So, there is a felt need for regulations in the banking sector which may support the sector grow and act responsibly towards hopeless and helpless too. Needless to mention, BFIs of Nepal mainly prefer to concentrate their business activities merely in urban and peri- urban areas and that too to a segment of population which is supposed to be very convenient to deal with.

Considering that microfinance could be one of the effective strategies for financial inclusion and poverty reduction, the 1990s saw growing enthusiasm for promoting microfinance industry in different forms and models in Nepal. Though early advocates, including Muhammad Yunus, claimed that microfinance would help people get out of poverty, even seeing it as a silver bullet for eradicating poverty, the microfinance industry these days is coming under fire for failing to deliver on poverty alleviation impacts. The reason is that, Microfinance Institutions (MFIs) opt to reach the upper poor amidst debate about whether MFI should target simply the poor or the poorest too. There has been found many challenges of reaching poorest of the poor people in the country, the major being physical, economic and social barriers. Looking at the challenges faced, the restructuring of the policies and strategies for MFIs is necessary to overcome the obstacles. The government and the Nepal Rastra Bank (NRB) can make some inroads into enhancing financial inclusion of socially excluded and the poorest according special role to MFIs, among others. There are thousands of people in one communities whose lives are shattered by high cost unaffordable credit from lenders, who act irresponsibly and treat their customers unfairly, preying on their vulnerability. So, there is another way to lend, a way that creates hope and opportunity, provide ethical loans and advice to local people. MFIs could be instrumental to protect and promote the decent living of depressed communities through responsible finance.

A responsible MFI must achieve the double bottom line- economic growth without compromising its core mission of serving poor clients. China, which over a single generation has become the world’s second biggest economy, has also proven that microfinance can help enterprises flourish, create jobs and reduce poverty. Various forms of support and development initiatives, including food consumption, savings plans, skills training and microfinance can be sequenced to enable people to graduate out of extreme poverty and into sustainable livelihoods. This adapts a methodology developed by BRAC in Bangladesh. Graduation program needs long term soft funding from a donor or a government.

Lesson has to be learnt from giant country, China which, in July 2020 announced eradication of extreme poverty. To achieve this herculean task, the government of China prepared a roadmap for eliminating extreme poverty by 2020, calling for mobilization of all resources to win the anti-poverty war. The government further designed minimum living standard guarantee scheme and conditional cash transfer programs, defined poverty alleviation responsibilities of governments at all levels, developed a rigorous monitoring and evaluation system establishing an exit mechanism for poor districts/regions. Social safety nets for the most vulnerable are by far the most powerful anti-poverty program even in the United States. The importance of robust social protection systems for safeguarding the poor with lost hope and expectation is becoming clearer than ever in Nepal too.

To conclude, given the link between financial inclusion and development, government should keep pushing for more access to and use of financial services apart from enforcing social safety net programs for the poorest. The central bank needs to direct and regulate the commercial banks for responsible financing in order to boost financial inclusion. Keeping in view that MFIs have played significant role in transformational development of the country, they have to be promoted and protected for the larger interest of the poorest. Since MFIs have been promoted by the private investors and they collect fund from market debt, reaching to the poorest with financial products of their needs is no longer a compulsion for them. MFIs in fact have deviated from their original goals to serve the poorest. Setting up of a national microfinance fund for support to the MFIs could be one of the strategies to make MFIs responsible for financing to the poorest, thereby seeking their contribution to ending extreme poverty of the country.