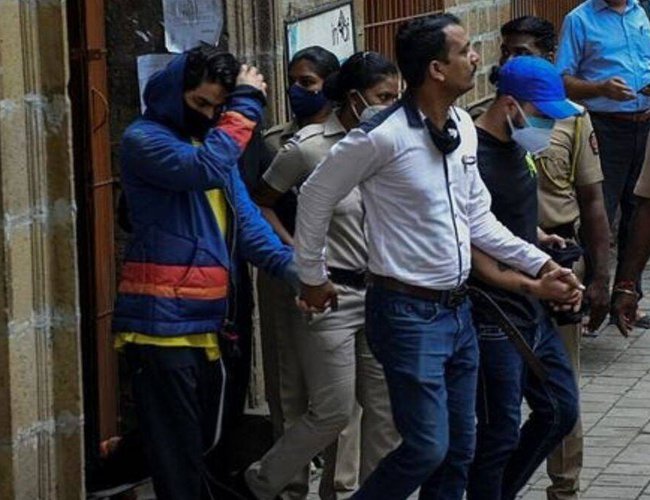 Shahrukh Khan's Son Aryan Khan Arrest Live Updates: Seeking extension of custody, NCB had told the court it is still conducting raids and "anyone arrested in those raids would be needed to be confronted with the present accused".

A Mumbai court sent Aryan Khan and seven other accused to judicial custody in the cruise ship drug raid case, while rejecting the NCB’s plea for further custody. The court said that the NCB’s remand report was vague.

Meanwhile, lawyer Satish Maneshinde is moving interim bail for Aryan Khan, which has been opposed by ASG Anil Singh. The plea will be heard at 11 am tomorrow.

The Narcotics Control Bureau (NCB) is likely to seek further custody of Aryan Khan, Arbaz Merchant, and other six accused till October 11 in the case pertaining to the alleged drug bust on a cruise ship off the Mumbai coast last week.

Aryan Khan, the son of Bollywood actor Shah Rukh Khan, was produced before the Esplanade court in Mumbai for bail along with seven other accused in a case related to seizure of drugs onboard a cruise ship. Khan and two others are in the custody of Narcotics Control Bureau (NCB).

All places of worship in Maharashtra are reopening on Thursday months after they were shut during the second wave of coronavirus pandemic. The Maharashtra Government had earlier announced that its decision to reopen the temples across the state on the first day of Navratri.

The Brihan-Mumbai Municipal Corporation (BMC) said all restrictions put up by the state government should be followed, including no offering of prasad/sprinkling of water on visitors. Religious places have been asked to allow visitors through slot bookings and not to hold large gatherings.