The Indian Ocean for long has been a source of nourishment and remained at the centre of hydrological cycles. The weather pattern in this ocean has direct bearing on the mountains, stretching across the Hindu-Kush Himalayas. 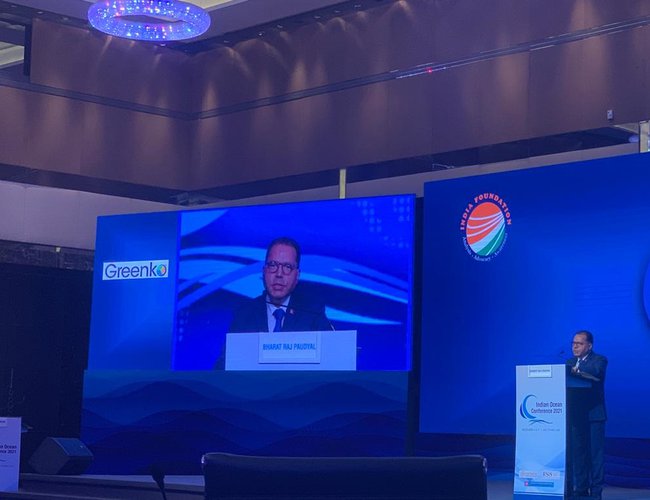 It is my honor and privilege to address this Fifth Indian Ocean Conference being held in the beautiful city of Abu Dhabi. Let me begin by extending our warm congratulations to the Government and friendly people of UAE on the Golden Jubilee celebration of their independence and wish for continued peace, progress and prosperity of this friendly nation.

I would like to express my sincere thanks to the India Foundation and the Government of UAE for organizing this Conference and for the warm and generous hospitality.

As we grapple with the challenges of COVID-19, climate change and economic disruptions, I cannot overemphasize the theme: “Indian Ocean: Ecology, Economy, Epidemic”, which is equally relevant for coastal as well as landlocked countries. The gravity of these challenges demands our collective actions more urgently than ever.

I am confident that the ideas we reflect in these two days will contribute to this endeavour. We all have been talking about interconnectedness. The problems today, transcending our borders, have accentuated the rationale of the dictum that we live in one world.

Take for example the question of ecology. Though miles away, the existence of oceans and mountains is inseparably linked. The ecosystems depend on each other.

The Indian Ocean for long has been a source of nourishment and remained at the centre of hydrological cycles. The weather pattern in this ocean has a direct bearing on the mountains, stretching across the Hindu-Kush Himalayas.

The Himalayas instead feed the perennial rivers, serve as a heat sink in summer and sustain the civilizations downstream.

The looming climate crisis has not spared either of them. The sea levels rise and ocean water gets more acidic on the one hand; and on the other, the high mountains are losing their snow covers.

This is jeopardizing the lives and livelihoods of many. Marine, as well as terrestrial biodiversity, is, fast deteriorating. Climate-induced disasters have engulfed coastal states and small islands as well as the mountains.

This intrinsic linkage should be well considered while pursuing the goal for healthy oceans –as embodied by UN SDG 14. Any meaningful agenda on the ocean must, therefore, take on board the land-locked countries and mountainous ones.

With its vast spread, the Indian Ocean is rich in resources. It provides important sea lanes that serve as arteries of the international economy. Routes for more than three fourth of the world’s sea-borne oil, and one-third of the global trade, the Indian Ocean’s significance is doubly attested – in economic dimension as well as in its strategic value.

Even for a landlocked country like Nepal, the Indian Ocean is a lifeline for the majority of its external trade. Peace and stability in the Indian Ocean are, therefore, important for all of us.

Issues such as piracy, marine terrorism, drugs trafficking and interruption in freedom of navigation can erode economic vitality. Addressing these challenges should be an important pillar of the agenda to properly harness the potentials of the ‘blue economy.

An enlightened approach for economic cooperation in the region can enhance intra-regional trade and investments. Such a move will have multiplier effects and make this region a substantial powerhouse of the world economy.

Landlocked developing countries are in need of international and regional support to enhance their capacity for reaping the benefits of the ocean, including in the utilization of the marine resources under the high seas. Realizing the already made commitments in an effective manner is crucial for enabling them in this regard.

Epidemics trigger a heavy toll, not just on the economy but also on our lives as a whole. In the interconnected world, epidemics are seldom local in nature and can quickly spiral into a global pandemic.

The COVID-19 pandemic has come as an epochal phenomenon. It has revealed that we may be facing the same tempest, but the countries are in different rafts. Some are better equipped to fend off the crisis, while the poorer one struggles to remain afloat.

With lives lost and livelihoods disrupted, the pandemic has further entrenched poverty, strained public health systems, and exacerbated inequality. Fallouts have been felt in international trade and tourism, the lifelines of many countries in the region. Besides, we are entering the third year of the pandemic with new variants of concern circulating from nowhere.

With therapeutics innovation and the capacity to produce vaccines, the Indian Ocean region has the potentials to help save lives in the region and beyond. The impressive advancement of India and the UAE as pharmaceutical and technological hubs has hugely contributed to this end.

More robust cooperation in vaccination will be a significant deliverable, proving the real prospect of our collective endeavour.

Also, sharing of technical know-how and capacity enhancement in healthcare should be at the forefront of regional cooperation in the context of the pandemic.

Nepal attaches great importance to the Indian ocean: its security, sustainability and economic potentials. Linking our highlands with the Indian Ocean with seamless ‘hardware’ and ‘software’ of connectivity is our priority and these include roads, railways, waterways and power grid interconnection.

Nepal is committed to increasing its share of clean energy and achieving net-zero carbon emission by 2045, contributing to the region’s ecology. Nepal has vast potentials in generating hydroelectricity to drive economic growth not only in the country but also in South Asia.

Nepal stands ready to work with all countries in the Indian Ocean region to address the challenges pertaining to ecology, economy and epidemic.

I conclude by complimenting the Organizing Committee of the Conference once again for this worthy initiative of creative dialogues on the most pertinent issues of our time. I feel hugely benefitted from these rich deliberations over the two days.

Paudyal is the foreign secretary of Nepal. Excerpts of statement delivered as the Head of Nepali Delegation to the Fifth Indian Ocean Conference – IOC 2021

Paudyal is a Foreign Secretary

Nepal Is Bearing The Disproportionate Burden Of Climate Change
Sep 27, 2022
Nepal Has Consistently Supported Israel’s Right To Live In Peace
May 19, 2022
UNICEF’s Work In The South Asia Too Has Yielded Some Remarkable Results: Foreign Secretary Paudyal
Dec 10, 2021

China’s Rapid Transformation And Lessons To Learn By Krishna Silwal 2 days, 9 hours ago

Youths In Nepal Elections: From Social Media To National Platform By Sangya Dhakal 4 days, 8 hours ago

Skeleton In The Sandook By Hemant Arjyal 5 days, 6 hours ago

An Overture Filled with Confusion By Dr. K. Uprety 6 days, 13 hours ago