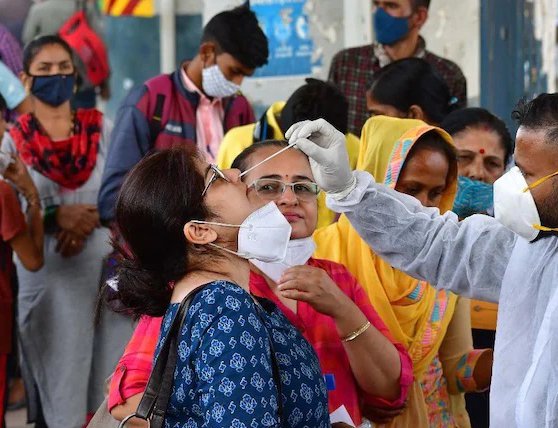 Only 0.7 per cent of global Covid cases are reported in India. Also, a sharp reduction in Covid cases is observed in India, when the cases are surging in some parts of the world.

According to the health ministry, on average around 11,000 Covid cases are reported on a weekly basis in India, a sharp reduction in the number of cases as compared to other countries. India accounts for only 0.7 per cent of global Covid cases.

Luv Aggarwal, Joint Health Secretary said "There has been a sharp reduction in the number of cases. Only 0.7% of global cases are reported in India."

"There has been a sharp surge in the number of Covid cases in many countries in the world. This notes an increasing trajectory of rising cases on a daily basis. A peak of 42.3 lakh cases per day was noted on January 19, which is 4.68 times higher than the previous peak on April 23. Germany, Russia and South Korea are the nations reporting a high number of daily Covid positive cases," he said.

The number of Covid deaths are also declining in India. From February 2-8, India reported 615 deaths on average, a decline of 76.6% from the peak of what India has seen.

The average weekly Covid positivity rate in India is 0.99 per cent. The number of active cases in the country is around 77,000. In the last 24 hours, only 6,561 Covid cases were reported in India.

According to the health ministry, there was an estimated peak comparison made with other countries on the number of cases they recorded during the third wave. India was estimating a peak of more than 19 lakh cases per day if compared with the overall surge in the world. The country was estimating a surge of more than 36 lakh cases per day, more than eight times when compared with the surge in Germany.