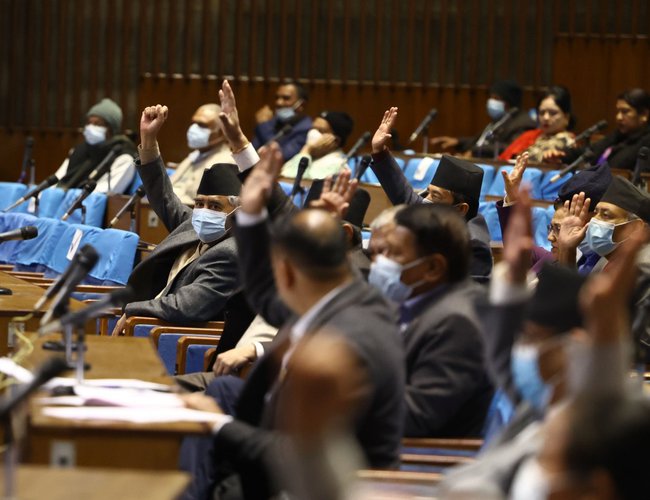 As the House of Representatives meeting passed the Millennium Challenge Corporation (MCC) Agreement with an interpretative note on February 27, it paves the way for the implementation of the 500 million dollar grant development project ending the long political deadlock.

After eleven years of its inception in Nepal, the House of Representatives of the Federal Parliament has ratified the MCC ending the current political uncertainty and chaos and saving Nepal’s reputation.

As Agni Prasad Sapkota, the Speaker of the House of Representatives announced the ratification of the MCC agreement, the most visibly happiest man was Prime Minister Deuba who had made all efforts to bring all his coalition partners and main opposition party CPN-UML in favor of the agreement. Using his own diplomatic channels, Prime Minister Deuba also conveyed his compulsion to the United States and the need to attach an 'interpretive declaration'.

From his own party to the country, Prime Minister Deuba emerges as an unchallenged leader. In his first tenure, he also played a crucial role to convince all the parties to ratify Mahakali Integrated Treaty with India.

Although the interpretive declaration does not have any legal binding, it gives a face-saving formula to his two coalition partners CPN-Maoist Center and CPN-UML United Socialist. 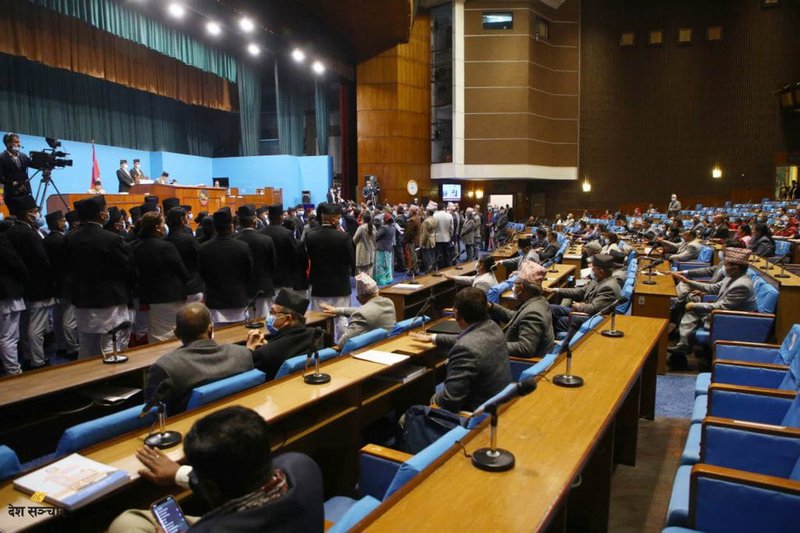 Highly suspicious of such a big US project in its backyard, Nepal’s northern neighbor China, which openly expressed hostile views and Southern neighbor, which watched cautiously without comment, Prime Minister Deuba’s proposal of attaching interpretive declaration also aimed at reassuring them about their concerns.

To further assure Nepal’s neighbors, the cabinet meeting on February 28 has also said Nepal will not allow its soil to be used against any country of the world including neighbors India and China.

“In line with the spirit of Nepal's foreign policy of maintaining friendly relations with all countries, the government is committed to preventing the use of Nepali territory against any of the friendly countries including India and China,” said a statement issued by the Cabinet.

After the approval of the agreement, the US Embassy in Kathmandu has issued a statement saying the decision whether to ratify the $500 million-dollar MCC Nepal Compact has always rested with the government of Nepal as a sovereign nation. The US embassy said that the ratification of the Millennium Challenge Corporation (MCC) compact means more jobs for the Nepali people, a reliable supply of electricity and lower transportation costs.

"In the nearly 20 years since its inception, MCC compacts have helped alleviate poverty around the world by forming partnerships with developing countries who are committed to economic freedom, investing in their citizens, and good governance, including promoting democratic principles and combating corruption," the statement stated."The Government of Nepal signed the MCC agreement in 2017 after determining its goals to modernize Nepal's energy and transportation sectors with the hope of helping more than 23 million Nepalis," the US embassy said, adding, "The Nepali government will now be able to continue to work towards implementing the five-year program."

This year marks the 75th year of diplomatic relations between Nepal and the United States. During these 75 years, Nepal has seen monumental and incredible changes, the statement further states."We have stood with Nepal through these changes and supported the country with development aid, disaster response and preparedness assistance, health, and education programs, and more. The United States' relationship with Nepal is broader than one agreement and we will continue to support the country and its democratic values and long-term economic prosperity.

For the last seven months Prime minister Deuba, who is in the last leg of his political career, has quietly listened and observed the activities of his coalition partners on the MCC Agreement. He tolerated all double speaks of leaders of his coalition partners Maoist Center and Communist Party of Nepal United Socialist and their actions sending cadres to the street to protest against tabling it in the parliament.

A day after parliament pass the MCC, Prime Minister Sher Bahadur Deuba spoke with US Secretary of State Antony Blinken. This shows PM Deuba's successful drive in the process of passing MCC from parliament. He twitted "spoke with US Secretary of State @SecBlinken and discussed Nepal's poverty alleviation, development & issue of climate change. We appreciate 75 years of continued US support for our progress. We also discussed Russia's invasion of Ukraine & our support for Ukraine's sovereignty." 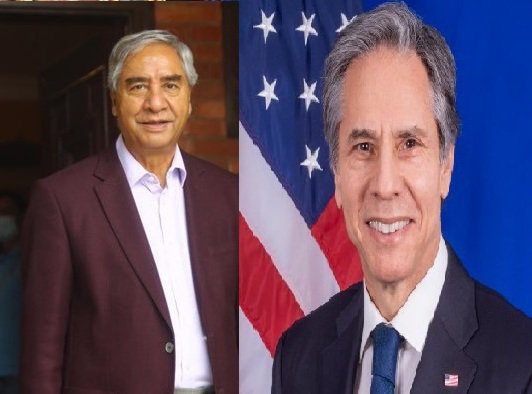 Similarly, US Secretary of State Antony Blinkenof tweeted." Good call today with Nepal’s Prime Minister @SherBDeuba to discuss Russia’s unprovoked attack and our support for Ukraine's sovereignty and territorial integrity. We will continue to work closely together on economic development and regional challenges."

Along with this, PM Deuba was also in a difficult situation as the speaker of House of Representatives Sapkota opposed the tabling of agreement in the House session,

As the deadline given for the ratification of the agreement came closer, PM Deuba, who saw deepening differences over the MCC agreement and a hostile statement coming from Nepal’s neighbor, jumped in the course.

Using her own clout, Dr. Deuba also helped Prime Minister Deuba to convince messages regarding the MCC agreement to all the external stakeholders involved in it. 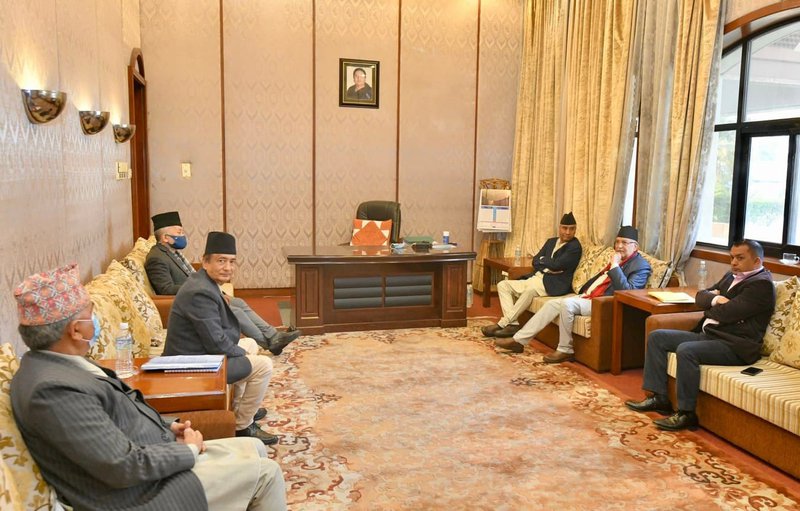 With the assurance of CPN-UML leader Oli, Prime Minister Deuba was able to press his coalition partners Pushpa Kamal Dahal and Madhav Kumar Nepal to change their stand and support the MCC Agreement.

With all these efforts, Nepal's Parliament ratified a contentious US-funded $500 million grant agreement a day ahead of the February 28 deadline set by Washington, ending months of debates, protests and polarization in the country.

Finance Minister Janardhan Sharma presented the proposal in the House of Representatives for endorsement of the Millennium Challenge Corporation (MCC) compact along with the Interpretive Declaration.

Speaker Sapkota, who was a die-hard opponent till a week ago, announced the ratification of the agreement through voice vote despite protests by the main opposition CPN-UML in the lower house.

"I declare that the Millennium Challenge Corporation agreement and its Interpretative Declaration have been endorsed with majority votes,” said Sapkota.

The agreement, the second-most debated agreement after Arun III in the country's history over fears that some its provisions undermine Nepal's sovereignty, was tabled in the House for ratification on February 20.

The agreement of the ruling alliance partners including the CPN-Maoist Centre led by Pushpa Kamal Dahal 'Prachanda' and CPN-Unified Socialist-led by Madhav Kumar Nepal helped proceed with the deal with the inclusion of an interpretative declaration. They believe that attachment is meant for clearing confusion among the general public surrounding the MCC.

The 12-point Interpretive Declaration clearly mentions that being a part of the MCC compact Nepal shall not be bound to be part of the US military strategy or security alliance such as the Indo-Pacific Strategy.

It also mentions that the conduct of the MCC would be regulated by the prevailing Laws of Nepal and MCC would not have any ownership over intellectual property and the Nepal government enjoys the right to nullify the MCC compact within 30 days of issuing a notice if it violates Nepalese laws.

Nepal and the US in 2017 signed the MCC agreement, meant for building Nepal's infrastructure such as electric transmission lines and improvement of national highways. 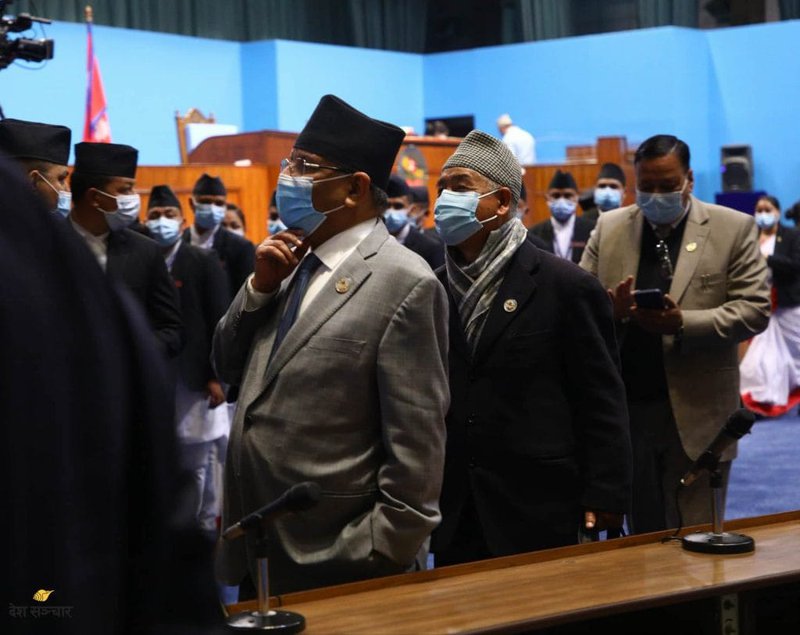 The MCC is a bilateral United States foreign aid agency established by the US Congress in 2004. It is an independent agency separate from the State Department and USAID. Nepal's political parties were sharply divided on whether to accept the US grant assistance under the MCC agreement.

The MCC also dragged Nepal into a geopolitical game, with Beijing taking a jibe at Washington for providing a "gift" to Nepal with an ultimatum, for a second time in a week, firstly warning the US against using “coercive diplomacy” in Nepal.

A part of the $ 500 million will be spent on improving road projects, it said. "With the passage of the compact, which had been in Parliament since July 2019, Prime Minister Deuba has pulled off a coup, as he has not only managed to stick to the deadline of February 28 given to the United States but also saved the coalition from breaking apart.

While Nepali Congress was firm on its stance to ratify the agreement, its partners in government - CPN-Maoist Centre, CPN- Unified Socialist, Janata Samajwadi Party and Rashtriya Janamorcha Party - were opposed to the same.

However, after much political polarization and consequent engagements later, ruling alliance parties finally reached a consensus to proceed with the deal, but with the inclusion of the interpretive points to the proposal.

Parties in government other than the NC were suddenly threatened at the prospect of disintegration of the coalition owing to NC's recent dialogues with the main opposition party, which were deemed to be nearing a conclusive agreement. 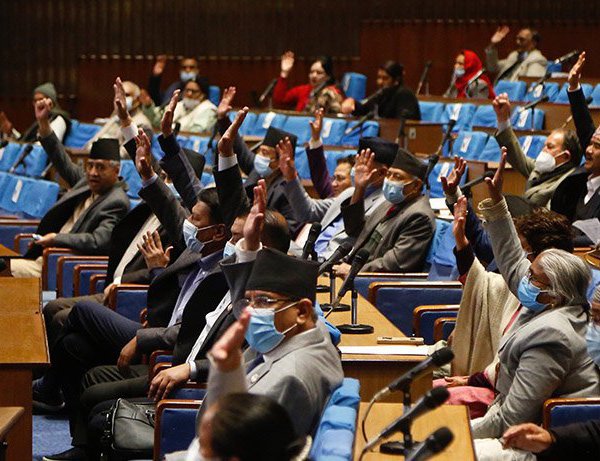 Organizing a press conference, Dahal said his party agreed to pass an interpretative declaration along with the MCC compact as it would have a binding effect on the other party - the United States of America - which has pledged a grant of $500 million for the construction of electricity transmission lines and road upgrade project.

"Had we not supported the MCC compact, it could have led to the breaking up of the coalition government and derailment of the constitution and the comprehensive peace process," said CPN-MC Chairman Dahal added.

China is wary of the US making forays into Nepal. China, whose political influence as well as investments has grown in Nepal significantly recently, was mostly silent in recent months after Prime Minister Deuba came to power.

Although China took a harsh stand earlier, opposing the MCC Agreement, it has softened its stance after passing the agreement by Nepal’s parliament. 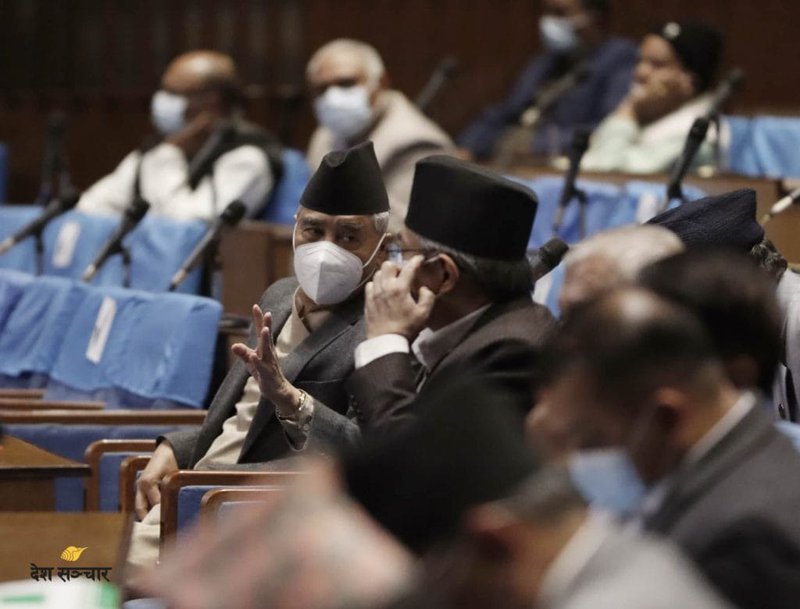 A spokesperson for the Chinese Ministry of Foreign Affairs Wang Wenbin said China had noted the ratification of the Millennium Challenge Corporation compact, along with the "interpretative declaration" by Nepal's House of Representatives.

"The Chinese MoFA spokesperson said that as Nepal's friendly neighbor and development partner, China would as always support Nepali people in independently finding a path to development.

MCC Agreement also suffers from fake news campaigns and rumors. In the view of senior advocate professor Dr. Gandhi Pandit, out of ten speakers, he participates in the debate over MCC Agreement for over three months, none of his opponents read the contents of the agreement.

“I was shocked to hear from well-known scholars to senior politicians including former prime minister that they ever read the MCC Agreement,” Gandhi said to New Spotlight. “As I expressed the views on the basis of agreement document, my opponents are always in defense. There is nothing new in the attached 'interpretive declaration' and all are there in the original agreement as well as explanation letter sent by MCC on September 2021.”

Passing the MCC agreement, Nepal has been able to avert the major crisis of its credibility at the international level as a state. This way, Nepal has shown its commitment to further strengthen friendly relations with the United States.