Not many believe that the current dispensation would address the urging of Nepalese consumers to protect them from rising prices of essentials and provide fertilizers to farmers facing scarcity of it. Small wonder, majority of hard-hit and somewhat ignored people have very little interest in what is read in the Parliament. 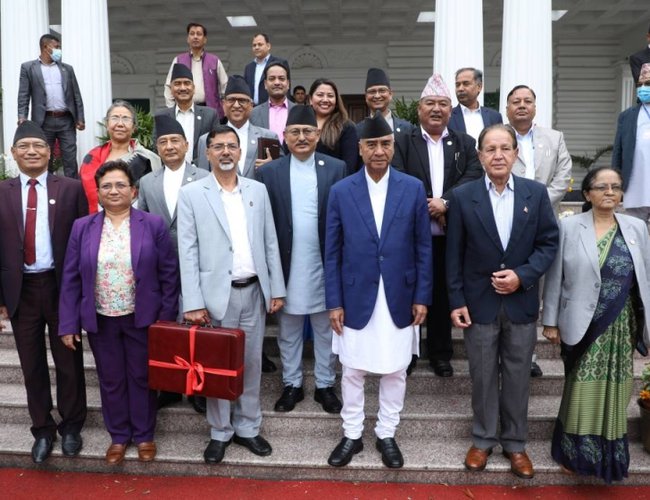 Contrary to our expectation that the main opposition party will continue to disrupt the House proceedings until its final dissolution for general election some six months from now, UML leaders seem to have made up their mind to let the House remain peaceful during the budget session that commenced on May 17.As soon as the proceedings began that day, Speaker Sapkota allowed Pradeep Gyawali to speak, understanding signal of the opposition lawmakers who had risen from their chairs. Gyawali observed that their obstruction was aimed at protecting democratic values and as the situation had changed after local polls, UML decided to end House obstruction, adding they still believed in the issues they raised. He also believed that it was not nice to continue with this kind of programme at a time when the country was facing serious problems. Nothing can be said whether this pleasant decision was purely a unilateral act of UML or a result of inter-party meetings that are taking place in increasing number after the polls. Something could have transpired and tacit understanding reached between the two political manipulators of this country-Deuba and Oli. Prachanda definitely is a force to reckon with in this country and no major implementable decision can be taken independent of him and his party. Things look good at least for now, mainly with the long- disturbed House turning peaceful.

President Bhandari was allowed to present the government’s policies and programmes peacefully last fiscal year also and this time also she struggled with government’s lengthy policy and programme document in an undisturbed House. She stated that the government would launch policies to spur economic growth, strengthen federalism, pursue economic diplomacy, and expand the reach of high speed internet across the country. Vital issues such as increasing domestic production, import substitution, export promotion, employment generation, and high economic growth have been touched upon in the usual conventional fashion. Not many seem to be interested in what she read in the joint session of the Parliament that day because people, hard hit by swelling prices of food, fuel and other essentials, have to channelize their efforts and attention to more important task of organizing resources to meet increased household expenditure. Those failing to do so are forced into cutting household consumption. Indeed, level of inflation has long crossed the government-promised level of 6.5 percent and is likely to shoot further up with Europe and America imposing sanctions on Russia, which has invaded Ukraine. The sanctions imposed have begun to destabilize supply chains, rendering them too fragile to depend on. These Western sanctions worked in the past and are effective even now, in most cases hurting both sides. Inflation in UK and USA has hit the highest level (9 percent and 8.5 percent, respectively) in 40 years. In May 2018 America imposed sanctions on Iran with the aim of stopping its oil exports altogether. It succeeded to a large extent because by October 2019 it fell to an average of 260,000 barrels per day from 2.3 million before the sanctions. European Union is anxious about reducing its overdependence on Russian energy. Germany, relying heavily on Russian oil and gas, is contemplating doing away with import of Russian energy. The cost of phasing out Russian stuff is not going to be small but the Europeans sound determined to do so. Along with energy, supply of Russian grains on the global market is threatened, while Ukraine’s exports of grains and oilseeds have almost stopped. It may be noted that these two countries in war jointly account for 28 percent of globally traded wheat and 75 percent of the sunflower oil.

Food and fuel prices have risen globally pushing up inflation levels and interest hike is likely to be taken resort to confront it, which in turn could invite serious recession. In addition to the negative impact on Nepalese consumers of these mishaps taking place elsewhere, changes recently introduced by India in its export policy are likely to hurt Nepalese consumers the most. Nepalese authorities may have taken note of India’s policy to restrict sugar export for the first time in six years to stop a surge in domestic prices. It may be noted that India is the world’s biggest sugar producer and second biggest exporter behind Brazil. This is done to check local prices and ensure steady supplies in the domestic market so that consumers are well protected during this time of global uncertainties. Nepal consumes 250,000 tons of sugar annually and domestic production is around 140,000 tons and rest is imported. Government-owned Salt Trading Corporation has only 32000 tons in stock. India has restricted wheat export, too, which is certain to jeopardize the operational viability of Nepalese flour mills that depend on wheat from India. Not many believe that the current dispensation would address the urging of Nepalese consumers to protect them from rising prices of essentials and provide fertilizers to farmers facing scarcity of it. Small wonder, majority of hard-hit and somewhat ignored people have very little interest in what is read in the Parliament.

In the current fiscal year, it is stated that our economy would grow by 5.84 percent at consumer price and at base prices it would be 5.49 percent. Economy would swell by Rs.574 billion to Rs.4851 billion. Actual for this fiscal year, however, would be available much later. Much has been written and spoken about the unsatisfactory state of our economy, citing growing imbalance in balance of payment, increasing deficiency in current account and ballooning trade gap. It may be noted that trade deficit reached Rs. 1389 billion last fiscal year, which was more than actual budgetary expenditure of Rs.1180 billion that year. Looking at the accelerating pace of deficit in the last couple of months, one should not be surprised if the imbalance exceeds total budgetary outlay of Rs. 1632 by the end of this fiscal. Budget implementation part has remained very unsatisfactory over the years. There has always remained a sizeable gap between what is set aside as outlay and actual expenditures. Looking at data covering a period of six years, it is seen that the gap between the two was lowest(Rs.206 billion) in fiscal 2075\76 and highest(Rs.422 billion) in 2076\77).In the ten months of the current fiscal, Nepal government has spent only Rs.878 billion of the allocated Rs.1632 billion. Situation on the capital expenditure front has remained all the more alarming, with less than 30 percent of the allocated Rs.378 billion spent in 10 months. In the meanwhile, the government made public a budget with a total outlay of Rs. 1793 billion in the joint session of the parliament on May 29.This budget for the fiscal year 2079\80 (2022\23) has exceeded the size of current budget by Rs.161 billion, which is not unusual because in certain years in the past its size has swollen by more than Rs. 200billion. It seems Finance Minister Sharma has partially responded to size-related suggestions of common people by fixing capital expenditure at Rs.380 billion, which is just Rs.2 Billion more than the amount set aside under this head in the budget for the fiscal year2078\79(2021\22). Why should anyone be unhappy seeing the unchanged size of capital expenditure a major portion of which has remained unspent in most years? We can simply pray that the government-wished stability and sustainable economic growth through production enhancement is achieved. It would also be very interesting to see the programme, with an allocation of Rs. 3 billion, related to enhancement of production and consumption giving tangible results and the stated employment-related wish of the government does not end up like the much-criticized similar scheme initiated by Oli government. Production enhancement hope of government, if materialized, could help achieve government’s target of reducing imports by 20 percent each year so as to balance the trade in five years’ time. In the backdrop of import-based revenue structure, it may, however, not be easy to collect the estimated Rs.1240 billion, a hike of more than Rs.200 billion over the current target.

Not many people would criticize government’s efforts to bring more people under the coverage of social security measures by, for example, reducing the elderly allowance threshold from 70 years to 68, cost free distribution of 98 types of medicines by government owned hospitals and offering some relief to middle-class families by increasing the income tax ceiling. A 15 percent hike in the salary of government employees is expected to provide some relief to households facing high cost of living and providing eight percent cash subsidy on export of certain items like cement, footwear, refined water, etc. can be taken as a positive attempt directed at promoting export and import substitution. Provision of Rs. 15 billion for chemical fertilizer, interest subsidy on agricultural loans and mechanism to procure certain agricultural produces at the announced support price are worthy of appreciation. Hope farmers do not have to complain about fertilizer scarcity next year around this time and they are also not heard complaining about being pushed into a state of distress sailing of farm produces.

Nepalis will not make a hue and cry even if the wished 8 percent growth is not achieved and inflation crosses the stated level of 7 percent. People have witnessed governments failing on these fronts (growth and inflation) in the past and they are not expecting this government to be an exception. People are aware that Covid onslaught has eased a bit but externalities originating in distant places have begun to hurt our economy. Moreover, politics is likely to attract serious attention of ruling leaders basically to foil Oli’s attempt to break the current alliance. Oli does not want the setback suffered by UML in local polls to repeat again in the forthcoming parliamentary polls and Deuba knows that keeping the alliance intact is a must, which can only ensure his sixth stint as head of government. Prachanda, with enhanced bargaining power in the new scenario after the local polls, is likely to remain a key figure in the alliance game. With our leaders heavily engaged in power game, Oli trying to break it and Deuba doing everything one could conceive of under the sun to keep it intact, we should not be unhappy to see our economy performing as usual, failing to achieve the stated goals. For now, let us be happy that annual rituals have begun peacefully and are likely to conclude in a peaceful environment.

No Politics And Good Voters For (Local) Development By Prof. Dr. Prem Sharma 1 day, 7 hours ago

Is Bhutan’s Economy At Risk? By Thukten Zangpo 1 day, 10 hours ago