Nepal’s DRRM Policy Landscape: Well On The Way To Making Nepal Ready And Able To Respond To Disasters

Despite its exposure to multiple natural hazards, Nepal has a very strong foundation for building its resilience to disasters, especially if it manages to reform the few characteristics of its disaster risk reduction and management system that still need improving.

Now that federalism is being enforced and, as the Sendai Framework for Disaster Risk Reduction (2015–2030) calls for, Nepal is prioritizing disaster risk reduction and management (DRRM), the nation has had to adjust some of its old DRRM-related policies as well as adopt new ones. Under the DRRM Act (2017), which replaced the 40-year-old Natural Calamity/Relief Act (1982), the nation established both an institutional set-up and accountability mechanisms and switched from a relief-centric to a broad-based approach embracing every stage of the disaster management cycle: prevention, mitigation, preparedness, response, and recovery. 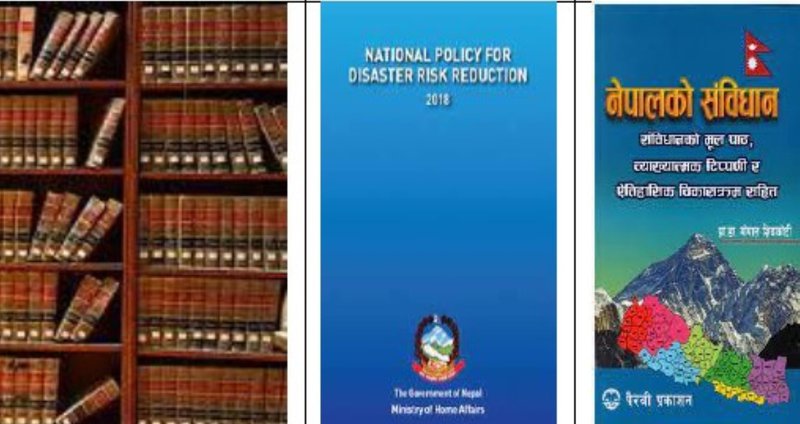 Nepal has intensified its efforts to build the capacities of the federal, provincial and local governments to reduce and mitigate disaster risks, as well as to be better prepared for and responsive to disasters. While responses to mega and widespread disasters will be led by the federal and provincial governments, local governments are the first responders to a disaster of any size. Since the capacities of local governments currently vary, they need to be made familiar with their full range of roles and responsibilities. The government will also need to adopt a single-door mechanism to channelize post-disaster response, recovery and reconstruction mechanisms and steer each phase of the disaster management cycle.

Now that the country practices federalism, responsibility for disaster has been apportioned to the provincial and local levels, as specified in Annex 9, Number 9 of the 2015 Constitution of Nepal, and determined by the scale and geographical spread of any given crisis. In terms of security, responsibilities have been allocated to the Nepal Army, Armed Police Force, Nepal Police, National Intelligence Department and Provincial Police as specified in Section 18 of the DRRM Act and National Disaster Response Framework (NDRF, 2019). In addition, the DRRM Act also includes provisions for requesting and deploying additional staff from the civil service and public organizations. The Local Governance Operation Act, for its part, emphasizes the roles that local governments should assume.

Unfortunately, ambiguous language in some policy documents and overlapping of the roles of the three tiers of government sometimes result in confusion during implementation. In addition, while the DRRM National Council said it would delineate clear authority for DRRM back in April 2019, it has yet to do so. Obscure work procedures are a third stymie. Unless confusions are clarified, there is a risk that no government body will assume responsibility and that each tier will blame the other two for failed DRRM, as occurred during the 2017, 2019 and 2021 floods and the 2019 windstorm. The handling of the recent COVID-19 crisis also undermined the existing DRRM system and the roles of disaster management committees (DMCs) at the federal, provincial and local levels because the Cabinet established a completely new temporary administrative structure, the Corona Crisis Management Committee (CCMC), despite the fact that pandemics, epidemics, and disease outbreaks fall under the mandates of existing DRRM agencies. At present, too, the federal government relies more on existing district-level DRR mechanisms than on the less capacitated provincial and local governments, a fact that undermines the spirit of federalism. In addition, the roles of district DMCs (DDMCs) overlap those of local DMCs (LDMCs), causing further confusion during the disaster response.

As per the Work Division Regulations (2017), one of the roles of the Office of the Prime Minister and Council of Ministers (OPMCM) is to coordinate DRRM and operate the PM Relief Fund. This provision suggests that DRRM-related matters are mostly regulated through forming and mobilizing committees and councils rather than, as would be more sustainable, through institutionalizing DRRM-led agencies and mechanisms.

Provisions are spelled out clearly

Sectoral contingency plans, national monsoon preparedness and response plans, and other similar documents all lucidly lay out procedures for action. The DRR National Strategic Action Plan, for instance, mentions the "percentage of local levels in disaster risk-prone areas having forecast-based preparedness plans." It has not, however, achieved its goals. The plan prioritizes forecast-based financing and updating the NDRF and district disaster preparedness and response plans (DPRPs) for forecast-based emergency preparedness and response, developing and operating mathematical forecasting models for major hazards, and relevant capacity-building. The DPRP Directives (2019) call for developing DPRPs at other than the district level and recognize that many DPRPs themselves are in dire need of revision to increase government ownership. In addition, local DPRPs and local disaster and climate-resilience plan (LDCRPs) need to be less template-oriented and more context-sensitive.

Despite these promising provisions, gaps in forecast technologies and communication systems prevent stakeholders from being able to alert at-risk communities in time. Furthermore, the existence of hazards with limited scope for forecasting, such as lightning strikes, wildfires, and earthquakes, makes it hard to balance between preparedness and other subsequent activities. The Early Warning System Operation Directives (2019) is still in draft form and needs enacting.

The Nepal governments also produced standards and procedures that helped reduce the impacts of disasters, particularly loss and damage. The DRR National Strategic Plan of Action, in particular, tackles all disasters at once through a comprehensive approach to disaster risks. The plan promotes disaster risk governance, encourages investment in disaster resilience, and consolidates disaster risk financing. Despite these positive developments, there is a need for more multiple-hazard-specific policy provisions for resilient risk-reduction initiatives.

The DRRM Act calls for the executive committee of the National Disaster Risk Reduction and Management Authority (NDRRMA) to delegate authority to the center as well as to the chief executive as necessary. According to Section 5.1 of the NDRF, the Cabinet is ultimately responsible for handling national crises. Indeed, the DRRM National Council and Executive Committee makes decisions through Cabinet meetings. While the NDRRMA has both regulatory and convening power required to manage and respond to disaster, in practice it leaves convening power to the OPMCM.

In the case of the COVID-19 crisis, however, the CCMC exercises regulatory power and the OPMCM exercises convening power, and, for sectoral crises, the respective federal ministry is responsible. For instance, the Ministry of Culture, Tourism and Civil Aviation is the national authority for crises such as air crashes and mountain disasters which strand tourists in the Himalayas. The Ministry of Home Affairs (MoHA) is the nodal agency for all DRRM-related matters.

Coordination of preparedness and response

Existing policy documents, including the Local Government Operation Act, call for coordinating preparedness and response among different government tiers and agencies. The DRRM Act provides for establishing DMCs at the federal and provincial levels and having them coordinate with existing district- and local-level DMCs. In the case of large-scale crises, the OPMCM and the MoHA coordinate with government and other stakeholders, including humanitarian clusters. Existing coordination mechanisms in the DRRM Act allow relevant national and local civil society and NGO actors to participate through humanitarian cluster mechanisms according to their interest and funding availability. The Act also calls for measures to include and mobilize I/NGOs, the Red Cross, the private sector and local communities to coordinate the rescue, relief and support activities.

Despite these positive initiatives, there is room for improving the meaningfulness and inclusiveness of participation and for more effectively building upon previous good work, promoting full coverage, and avoiding duplication. There is also a need to sort out the ministerial duplication of DRRM roles under the Work Division Regulation, the DRRM Act, and Part 5 of the Constitution. The DRRM Act states that "the Government of Nepal may seek international humanitarian and other aids where it is deemed that internal resources and provisions are found insufficient to manage immediate requirements for disaster situations." The government coordinates disaster preparedness and response with the international community through the United Nations Resident Coordinator Office, which coordinates between the government and humanitarian clusters as soon as the government appeals for its help. In addition, Section 5 of the NDRF states that the NDRRMA shall coordinate with national and international humanitarian teams and agencies to handle search-and-rescue and other humanitarian services.

While the DMCs of all tiers of government offer a platform for coordination, the hegemony of DDMCs and as yet unresearched challenges have undermined coordination across various sectors and levels of government and with other stakeholders. Challenges that DDMCs face include (i) maintaining cooperation with multiple agencies during disaster preparedness and response, (ii) receiving sufficient resources from federal and provincial governments, and (iii) reporting to concerned committees and authorities in a timely fashion.

Accommodate the issues of vulnerable groups

In general, plans do consider vulnerable groups. Section 39 of the DRRM Act, the NDRF, the National Policy on DRR (2018), and DPRP Guidelines (2019), in particular, all outline the impacts of key hazards on vulnerable people and groups. In addition, preparedness plans, particularly humanitarian cluster contingency plans, take into consideration vulnerable groups and, to some extent, address the specific impacts of key hazards on these groups.

However, some documents, such as the National Policy on DRR, address all vulnerable groups (women, children, and the elderly, as well as, less frequently, persons with disabilities as priorities for relief) using a blanket approach. In contrast, preparedness plans do not take vulnerable groups into consideration or address the specific impacts of key hazards on them. The national monsoon preparedness and response plans of 2021 and 2022 include provisions such as safe spaces, dignity kits, and psychosocial support, and ‘gender-based violence standard operating procedures in emergencies’ do target vulnerable women, but none of these documents mention the specific needs of persons with disabilities; girls, boys and unaccompanied children; or the elderly; or how any of these groups could be addressed. There is a need to standardize provisions and focus on specific groups. In addition, the government’s intent to make DRRM and resilience-building inclusive would be better realized if policies about how to integrate GESI in the disaster management cycle and make GESI a goal of current DRRM governance were clearly laid out.

Nepal has timely and consistent access to the human and financial resources it needs to manage and respond to a crisis. In particular, the NDRRMA relies on the Disaster Management Fund and the OPMCM on the Prime Minister's Disaster Relief Fund, which it mobilizes as prescribed in the Prime Minister Natural Disaster Relief Fund Regulations (2007). For human resources, the government can mobilize all five of the security forces in the nation. That said, there are gaps in the technical capacities of staff. For instance, the NDRRMA, which is relatively new and still needs institutional strengthening, have inadequate disaster specialists to be able to take over the ‘disaster management fund’. Also, bureaucratic budgetary constraints hinder expenditure on disaster preparedness and response.

The National DRR Strategic Action Plan is only a conceptual framework defining the roles and responsibilities of relevant agencies and stakeholders in DRRM; it says nothing about which financial modality to use. In fact, except for the provision for disaster management funds described in Section 22 of the DRRM Act and rules 10 and 11 of the DRRM Regulations, financial modality is not explicitly discussed in any policy document.

Paving the road ahead

Nepal’s could advance its DRRM policy initiatives by implementing some of the following recommendations.

(Dr. Gautam is an Independent Researcher and Consultant. He is associated with National Disaster Risk Reduction Centre (NDRC) Nepal as Senior Research Fellow and HADRI/Western Sydney University as Adjunct Fellow. He can be reached through drrgautam@gmail.com)

The “Safe School” Campaign: Is Nepal moving In The Right Direction?
Sep 12, 2022
How Prepared Is Nepal For Future Disasters?
Aug 09, 2022
Without Cooperation, Water-Induced Disasters Will Continue To Wreak Havoc
Jul 27, 2022
COVID-19 And Social Protection: WhatAre The Next Steps?
Jun 11, 2020
Growing Fire Incidents Wreaking Heavy Losses in Nepal
May 14, 2020