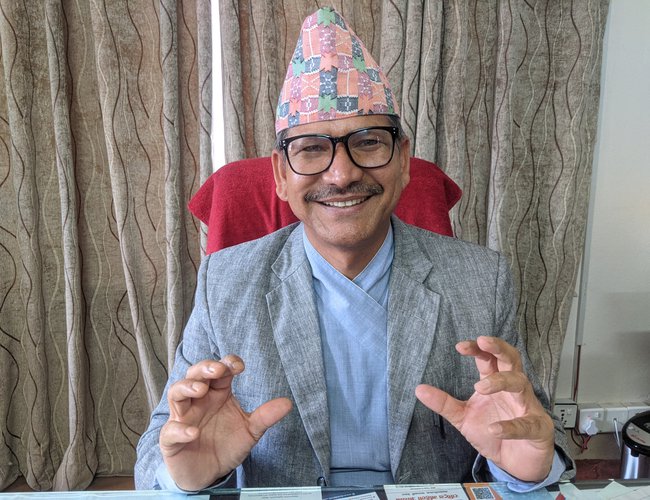 How do you see the role of National Dalit Commissions in the context of federalism in Nepal?

National Dalit Commission is in the very initial stage of implementation of federalism in Nepal. We have collaborative relations with the local level and provincial level but we are yet to have a legal foundation. We are planning to support local-level governments to draft the laws, regulations and guidelines related to Dalits. We have been exploring sources for this.

What is your mandate?

Our commission, which was established by Part 27 of the Constitution, has been granted a particular mandate to protect and promote the Dalit rights guaranteed by the Constitution and to ensure social justice for them.

What is the mandate of the commission?

The legal mandates provided to our commission is broad enough to make the government accountable for fulfilling the promises in the Constitution of Nepal towards marginalized and minority groups and ending their historical marginalization and discrimination.

What about the mandate?

The mandates of the commissions are broad and encompass the provision of recommendations to government and other concerned bodies, conducting research, formulation of policies and programs, program implementation, individual complaint handling, and coordination and liaison with public entities.

What is constitutional authority?

What about Commission’s role at the provincial and local levels?

Despite all these, the Commission has been working with provincial level and local government in close collaboration and coordination on Dalit’s agenda and issue. We are in consultations with provincial and local governments to address the problems related to Dalits. We are planning to hold a series of programs for the elected local leaders regarding the empowerment of Dalits. During such meetings, we will also provide training for institution building and drafting the laws. We will help and collaborate with the local level for this.

How you are collaborating with the federal government?

If the federal government takes positively our demands to establish provincial level officers positively, it will solve the problems. If not, the Commission will support and collaborate with the provincial government to formulate laws and institutions to empower Dalits. We are also taking the necessary initiatives for this. Since provincial movements have enough resources, they can also help us.

What are future strategies?

We are now working to draft 10 years strategic plan. For this, we are in consultations with Dalit leaders, activities and rights activists and people outside the Dalit movement. As per the needs, we are also making five years working plan. We are preparing for this.

What other activities Commission is doing?

Besides that, we are also working in other areas. Dalit’s problem is also a national problem and this will affect the country’s entire progress. Solving the problems of Dalits is also solving the national problem. To solve this national problem; there need to launch national camping. The Commission has been demanding to launch such programs at the national level. We have been discussing this issue with the federal government. Sooner the federal government implements the programs and policies suggested by the commission. It will end the problems of extreme exploitation and discrimination, and exclusion against Dalit Community.

Despite so many changes, there still exists rampant exclusion and discrimination against Dalits. What do you suggest to end this?

There need to launch a national campaign through the joint collaboration between Dalits and non-Dalit. This kind of broader campaign can play an important role to end the discrimination and exclusion against Dalits. The current ongoing programs implemented by the federal, provincial and local level governments are just partial. For full circle programs, there needs to have bigger campaigns as proposed by the commission. Uplifting the Dalits requires collaborative and joint programs between Dalits and non-Dalit.

How do you see the ongoing Dalit empowerment program?

The current empowerment program is just a partial owner. Interracial, cultural programs require ending the existing discrimination against Dalits. The commission appeals to all concerned stakeholders to come and join to launch a national-level broader campaign. According to economists, Nepal has been losing up to 25-30 percent of economic damage due to exclusion and discrimination against Dalits. This is not only the loss of Dalits but also the loss of the country. For this not only the Dalit commission, needs to work. We are now working to make a plan. Due to a lack of enough resources, the commission has been unable to work at the speed.

What is the state of the Mdheshi Dalit?

The state of the Madheshi Dalit is very critical. Dalits living in Madsheh, Karnali and Sudupaschim provinces have been facing severe problems related to exclusion and discrimination. They have also been facing violent attack from upper casts. Despite constitutional and legal provisions, the problems are yet to solve. The issue of Untouchability is rampant in those areas as Dalit communities have been living there in humiliation.

How is the distribution of citizenship certificates and landownership state of the Madheshi Dalit?

It is unfortunate to say that over 75 percent of children born in Madheshi Dalit do not have birth registration certificates and overwhelmingly of them don’t have citizenship certificates as well. As there require citizenship to get services provided by the state and birth certificates for school registration, these Dalits are excluded from the state’s program. Living centuries in Madhesh, they are unable to get citizenship. They are excluded from mainstream national policies due to a lack of services and other facilities provided by the state.

What Commission has been doing?

We have been continually working to solve the problems of the Madheshi Dalit. The commission has been raising this issue with the federal, provincial and local level governments. Similarly, the literacy of Dalit children in Karnali is the lowest only a few percent of children reach up to class 10. This is the same in Sudurpaschim. Our constitutional and legal role is advocacy so we have been doing our best to raise these issues. It is the role of the government to implement and execute it. We have been raising the issues of Madhesh Pradesh, Karnali and Sudurpaschim.

How do members of parliament respond to your annual report at the Women and Social Committee of the House of Representatives?

In my three years of tenure, it was the second time I was allowed to respond to our report at the Women and Social Committee of the House of Representatives. The committee members asked various questions about our report and recommended federal government and the concerned ministry implement the suggestions given by us. We discussed our agenda before the sovereign parliament where we are accountable for our duty. It was quite a good intense discussion for about two hours.

Women and Social Committee, House of Representatives has directed the National Women Commission (NWC) to deliver its duties more effectively to serve the needs of violence survivors. The Committee’s President Niru Devi Pal instructed us to focus on the promotion of the overall interests of Dalits and deliver its duties effectively. The committee also directed to ensure effective collaboration and take integrated efforts to meet the objectives and goal of the commission.

What about discussions at provincial and local levels?

There are laws, regulations, and directives to protect the Dalits. However, the incident of discrimination and exclusion is still rampant. How Palikas are responding to the situation?

Although each ward of Palinkas has woman Dalit members, this provision helped to increase the participation of Dalits. As far as their role to protect the other Dalits is concerned, it is disappointing. They themselves have been facing exclusion and discrimination at the Palika level. This is the reason the commission is taking the initiative to call a nationwide conference of Palikas to inform them about the issues of Dalit exclusion and encourage Palinkas to launch empowerment programs. Local levels are not taking seriously the complaints filed by Dalits. Instead of taking violence against Dalits cases at the police level, leaders of the local level tried to settle the disputes. In this scenario, many Dalits were denied justice. This is a painful situation.

How do you see the state of Dalits now?

I am happy to say that violations and discrimination against the Dalit have declined slightly due to wide media reporting. Thanks to attention given by the media, many events are coming to the public. In the past, many issues related to discrimination, violence and exclusion were used to settle informally pressing Dalits to accept the compromising formula. Now, the issues are more formalized and are reaching the court. This is a major difference. The victims are receiving due compensation.

How is the situation at the formal level?

The situation is not encouraging at a formal level. For example, out of 1100 cases filed by the police, the court entertained only 200 cases. Out of them, only two persons were punished. The volume of punishment is very nominal. However, we have to accept the fact that something is changing in the formal sector as well. It used to be between victims and oppressors. Now, such cases are made public. This is not enough, however, we need to take it on a positive note that violence against Dalits and dissemination are appearing as a major headline. People are facing relief. 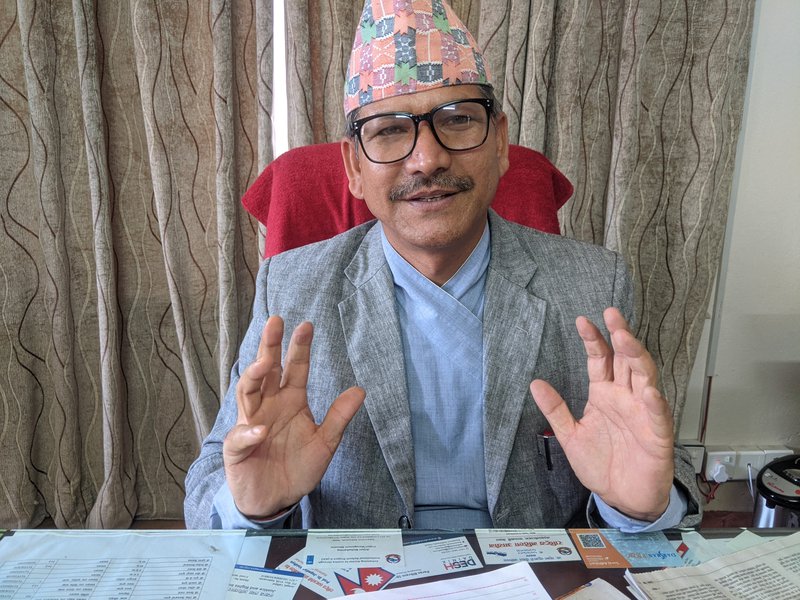 Does this mean the state is now Dalit-friendly?

Despite some changes, Nepal’s state system is not Dalit-friendly. For generations, Dalits has been facing discrimination. The state is not sensitive toward Dalits. If all stakeholders take initiative, we can change the situation.

What is the annual budget?

Our budget is very nominal. The government has been paying us a budget for salary and just a nominal amount to launch the programs. Due to budgetary constraints, the commission is unable to implement the program as it needs.

Do you conduct the programs in collaboration with NGOs and other civil society organizations?

We have been collaborating with various civil society organizations holding various programs. They invite us and we present our case in their programs. We have planned to go ahead with them.

Is there any support from bilateral agencies?

We have been talking with them regarding the possible collaboration to launch the programs in welfare and uplift of Dalits. However, we are still in the initial phase. Many development partners are also positive for our programs. We are now developing the projects.

How commission has been working with local level governments?

We have a formal legal process to work with level governments. We officially inform local levels leaders about our agenda for the visits. After discussion, we do a collaboration to implement and launch the program. As each Palinkas consists of a number of Women Dalit members, we use this mechanism to collaborate with at the local level governments.

How do you collaborate with the provincial government?

Unlike local-level governments, there is no such mechanism at the provincial levels. Despite the existence of issues of exclusion and discrimination at the provincial level, only Madhesh Pradesh has established Dalit Development Committee to empower the Dalits living in Madhesh. However, the committee is yet to work satisfactorily. Although the committee has enough budget, it does not have employees. It is not functioning effectively. The other six provinces are needed to learn from the experiences of the Madhesh provinces. So far as the programs are concerned, we don’t have any knowledge that any other provinces have implemented programs.