The country is teetering to fall apart because of their inability to democratically handle the state affairs. 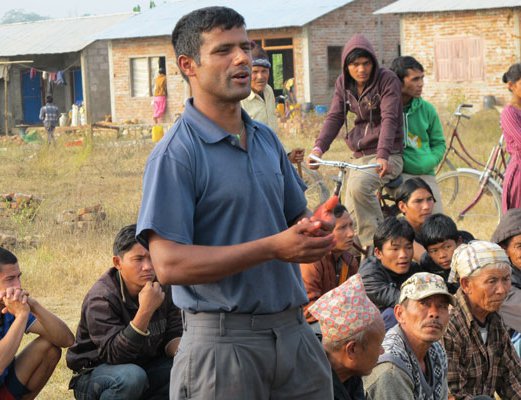 Nepali national politics is in troubled waters. Like Bhupi Serchan so aptly wrote in a famous poem hami aaphai milna nasakne, kasaile hamilai milaidinu parne, our political leaders cannot build harmony by themselves, someone else should do that for them.

Leaders of political parties, including the UCPN-Maoist, have failed to carry on with consensus politics. The country is teetering to fall apart because of their inability to democratically handle the state affairs. Maoist leaders used guerilla tactics to achieve their goals. They failed, and eventually, chose to rehabilitate their fighting forces in the local society as per the peace agreement.

Unlike the discordant central leaders, the local Maoist cadres have been coping with life creatively and harmonically. They are becoming the real social leaders in many respects. These Maoists are trying to fill the vacuum created after the Maoist 'people's war', gradually stepping in as the local leaders, social activists and development workers. They even receive requests to settle disputes among the locals. These former Maoist guerrillas, the locals know, have the experience of their own legal system— the Kangaroo court.

The former guerrillas have now learned to live peacefully. Some of them were scared initially to reconcile their new role with their own past activities. In a largely tolerant Nepali society, however, they are forgetting the past and moving on. Most villagers consider these guerrillas wise, intelligent and learned.

"I had heard that there were fights between the former PLA and the community people," Sarmila Lama Ghalan, teacher of Janahit Rastriya Primary School of Padampur 8, Chitwan, recounts. "We have a different experience. Here, they are settling the disputes. "

The former Maoist fighters are engaged in various social activities. They are willing to speak in front of the people, with villagers and outsiders, on developmental or other activities.

Recently, a media trip was organized by Support to Peace Process (STPP) of GIZ in Nawalparasi and Chitwan to see the activities of former combatants in their respective communities. Praising the activities of the organization, Rishiram Marahatta of Padamur 8, Chhayanabbe Bigha of Chitwan, requested to support the local school.

Former combatant Marahatta was well versed: "You're supporting us from our cantonment days. We've a heritage - a school in this village, the government hasn't been giving attention to it. We've been paying the school teachers from locally raised funds. Please help our school."

The cheering locals applauded his statement. This is the best tactic to be popular in the community. They often engage in developmental activities. They've been learning new techniques in vegetable farming and other activities, easily commanding respect from the local people. If you show some good aspects with the local people, that surely pays positively. That strengthens the relations with the local community.

"Some people claim that there's misunderstanding between former People's Liberation Army (PLA) and local communities," Marahatta further elaborates. "I'm surviving here with the kind of support from the community brothers and sisters. I often request them for their help."

He was a co-battalion commander and he got NRs 700,000 in compensation. From that money, he has built a small house in this community where he runs a provisional store. In addition, he's been growing vegetables in his small chunk of land.

Former PLA members have some 50 households in this community. Interestingly, many of these former guerrillas have chosen to stay in the communities nearest to their former cantonments. Even the local community has welcomed these new members of the society. Some I/NGOs are engaged with them for their further development by providing various skill trainings and opportunities.

It's not easy for them to settle in a small place, which is far from their previous settlement. Many of them are from mid-western hills and many other former Maoist hotbeds. In addition, they had their dreams raised by their party and doctrines. However, they have accepted the reality and started settling in various villages as commoners. Some of them feel left out from their party as well. But they have learned to accept the harsh reality of politics.

These former PLA also try to bring development to the local community because they know most of their comrade-in-arms are in various influential positions, including in the government. "They have helped to bring electricity in the village," Ghalan says. "It was not easy before. The local people were not capable to buy the electricity lines."

The local community has been benefitting in other ways as well. Government and some I/NGOs are attracted in the former PLA settled communities to carry out developmental works. That has been helpful to the locals as well.

However, many of former PLA look desperate too. The money they've received is not sufficient to eke out their livelihood. So they have been trying hard to make their life easier through economic activities. However, former PLA couples who are benefitted from the compensation are in a better off condition than a single beneficiary.

The condition of Tikaram Gharti Magar of Talawang 8, Rolpa, who has settled in Jhaltungdanda of Nawalparasi, is not easy. He has to visit the doctor thrice in a month and is surviving with a bullet in his head. He is unemployed and couldn’t join Nepal Army because his right eye had not been functional since he got injured in the war.

He can't go back to his own village. "I left my home village 16 years ago," he says. "I don't have moral strength to go back there."

Many of those who have opted to stay near the former cantonment area have given them some opportunities and helped to save them from the disgrace in their respective villages. Due to this difficult situation, they've been trying hard to have a new avatar in their life.

These former PLA are in difficulties though they are the trained local leaders for local community. In addition, they'll fill the vacuum in the local community. It's for sure that they will be helpful in coming election for UCPN Maoist or CPN-Maoist. However, the open political situation wouldn't spare them as well. They might reach in other political parties too.

Nepal's Over Dependency And Sluggish Development By Hari Prasad Shrestha 4 days, 1 hour ago

Refugees In Nepal: Recognition And Inclusion By Deepesh Das Shrestha 1 week, 3 days ago