A search for new dimension in Nepal Russia relations

Nepalese students had already demonstrated their capabilities / expertise in the field of technologies like aviation, power-generation, medicine etc. with very little scientific education, laboratory facilities and financial support available for the 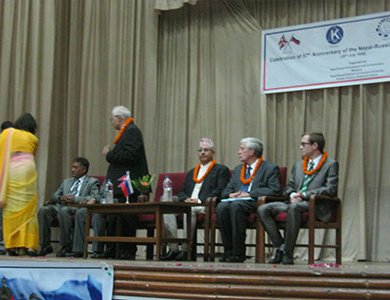 When Nepal entered into diplomatic relation with the then global power, the USSR in 1956, the political scenario in the Asian side of the world was basically different from today.  It was a hot belt of cold war. The USSR wanted south Asia free from the hegemony of so called capitalist camp. And, Nepal had its own ambition of being an independent sovereign nation in real sense of the term, not a small brother of neighbouring India. Both the countries signed the treaty of friendship and cooperation in 20th July 1956. With the Russian generous financial aid and technical support Nepal exercised political independence and economic development during 1960’s. That chapter had already closed after the end of the active cold-war period. Thus, the era of aid politics ended thereafter to enter into a new phase of relationship guided by the slogan of not aid but trade.

That popular axiom, not aid but trade, though very popular in the diplomatic circle by the name economic diplomacy, could not have been fully materialized. It has not been successful in delivering expected results, of course, due to the absence of required supporting instruments and initiative. We do not see, for example, economic advisors / counselors working in our Embassy in Moscow. How can one expect economic diplomacy actually working? From realistic approach there are little achievements one can see in the field of trade transaction and tourism promotion. Economic diplomacy has not been able to deliver expected results though it sounds very attractive. Many more plans and programmes have been implemented but without any desired outcome. Under the circumstances, one has to look for alternative avenues for achieving the desired goals. Here desired goal means friendship of and cooperation from Russia for all round development of the nation.

Nepalese students had already demonstrated their capabilities / expertise in the field of technologies like aviation, power-generation, medicine etc. with very little scientific education, laboratory facilities and financial support available for their research. If this factor, the capabilities of the young promising students, is considered seriously by the decision makers and give thought to establishing institutes for higher study in science and technology, that would be the most important decision and valuable contributions for the development of Nepal. Nepal possesses precious natural resources, flora & fauna. We export them unprocessed. There are so many items in Nepal which needed scientific research in other to ascertain their potentialities. But where is the manpower, laboratories and investment? In consideration of all these factors it is only the investment in the science and technology education. For releasing the forces of development in a country like Nepal, which had far more lagged behind in comparison to our economic giant neighbours, the only way is investment in science education.

While exploring possible areas of collaboration and cooperation with the Russia for the development of higher level science education in our country, Nepal- Russia Friendship and Cultural Association (Association) has decided to exploit the very occasion of the visiting Russian friendship delegation that included Pilot astronaut, twice Hero of the Soviet Union Mr. Vladimir Dzanibekov, who is also the chairperson of Russia-Nepal Friendship & Cooperation Society in April this year. Mr. Vladimir Dzanibekov is one of the very influential personalities of Russia capable of influencing the decision makers. He commands high respect there. The Association, therefore, planned to convince the delegation that science and technology based relation could be one of the viable areas for further promoting our bilateral relations in the present context. And, Russia is the most capable country which could offers valuable assistance in the field of promoting higher level science and technology education and research in Nepal.  As it is the topics of national interest requiring government level decision, we have decided to organize one interaction programme with the participation of former ministers of science and technology, leaders of major political parties, intellectuals and former ambassador to Russia. The main objective of the programme was to pin point the specific areas or subjects where we actually wanted Russian cooperation and collaboration.

The participants had suggested, in particular, cooperation in the field of
i.    nuclear and space technology,
ii.    alternative energy,
iii.    food technology,
iv.    Hydro-power development

It was unanimously agreed that the aforesaid areas might help develop Nepal faster. And, Russia is the best partner for progress. The mode of cooperation shall not be aid type as in the past but it will be a joint venture model where non-governmental bodies could also be a partner. Nepalese scientists / students and technicians shall be trained in Nepal and provided with an opportunity to research, and have a share in production. Russian scientists and experts shall also contribute in the research and training. Interested persons / organizations from both countries shall be invited for sharing project money. This model will provide three benefits to Nepal like a. identifying the underlying potentialities of whatever natural resources are available, b. maximization of benefits of the products, and c. availability of job opportunities to the people.

Further, it was also suggested that instead of sending students in Russia for medicine and engineering why not to establish joint venture institutes here in Nepal. It will be cost effective and also provide more opportunity to a greater number of students aspiring education in medicine and engineering. However, questions were raised as to language of instruction and lack of well equipped laboratories etc. These are secondary things. Of course, well equipped laboratories could be considered as a major hurdle. Suggestions were given for remedy, such as dividing the whole course into two parts and first-part courses shall be given in Nepal and the students shall go to Russia for the second part requiring sophisticate laboratories. In so doing they will have opportunity to experience the flavor of Russian institutes, education, and well equipped laboratories. Proposed joint venture programme in medicine is also inclusive of promoting other subjects like pharmacy, nursing etc. in addition to MBBS / MD.

After attentively listening to the discussion and suggestions, the Russian delegates remarked that the suggestions were very commendable and could be materialized provided Nepalese side is really serious. It was the indication that our government should initiate official move for the cooperation sought for. But we do not know how and which channel would be appropriate for ventilating this message to the decision makers of Nepal. The organizer has reason to believe that whatever is discussed in the programme should reach the decision makers because the political leaders belonging to various parties were present there. It was one of the forward looking approaches to more reactivate the relationship with the erstwhile friendly country the Russian Federation.

Uttarakhand Glaciers And Recent Disaster: A Lesson To Our Countr By Dr. A.B. Thapa 23 hours, 47 minutes ago