On The Sleepy Town Of Sagauli

Although he was born in Untied States, late Stiller became Nepali citizen. He died a few years ago as a patriot of Nepali. Renowned Nepali historian, Stiller dedicated his entire life to study of the history of Nepal. He has written a number of very 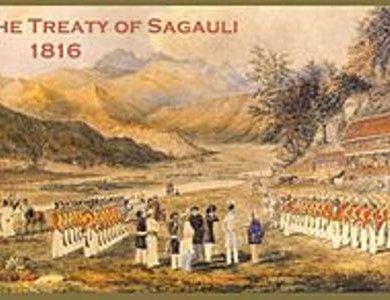 "The active season has activated in the loss to the enemy of hair of the geographical extent of his empire, comprehending the most valuable part of his possessions, with the curtailment in the same proportions, of his military strength and resources." -- Bikram Jit Hasrat, in History of Nepal: as told by contemporary chronicles to the governor general to the court of directors.

Sagauli is a sleepy town in north Bihar some twenty miles south of the Nepal's border city of Birgunj, with a tiny cluster of shops and a railway station. There is little to commend it today, and the average traveler hastens through with scarcely a pause, unless a tired freight train shuffles across the highway crossing and halts the flow of traffic for what seems an interminable wait in the sun. It is hard for anyone to imagine that this town ever had any claim to historical pretensions, and the Nepali traveler may be excused if he, too, dismisses it without the slightest flicker of interest. But, tired, dusty and forlorn as Sagauli may appear today, it still had given its name to one of the great turning points in the history of Nepal.

It was at Sagauli in November 1815 that British and Nepali commissioners sat down to negotiate the end of the Nepal-East India Company war. In the process they produced the treaty of Sagauli, which put an end to Nepali expansion and, with minor adjustments, drew the boundaries of today's Nepal. It also left such an impression on the socio-economic life of Nepal that is impossible to understand much of what has followed in the history of Nepal without considering the influence of this treaty.

Observers today show little surprise at the fact that there was a war between Nepal and the British. Almost everyone else in the subcontinent did; why not Nepal? Unfortunately, they tend to see such a war as quixotic. To them it seems obvious that Nepal was hopelessly outmatched and the results predictable. But, as is so often the case in the history, hindsight has been severely limited by the course of subsequent events. The nineteenth century of the East India Company into the greatest power in the subcontinent obscures the fact so well known to every historian of the subcontinent, that there was a time when the East India Company's power was young and when, with a concerted effort, its growth could have been cut short.

The war between Nepal and the East India Company is difficult to bring into sharp focus. It has been given scant attention in the classical texts of Indian history largely because it did not bring Nepal within the administrative ambit of the government of India. British historians of India were for the most part concerned on the birth and development of the Indian national movement. The few historians who touched on the war treated it as a brief interlude in the history of India and have chosen to comment on it, if they commented at all, because of the light the war shed on the character of the Marques of Hastings, governor general of the East India Company at the time, rather than for its own merits.

More recent studies have made a serious effort to understand and explain the causes of the war as well as its significance in the development of Nepal-India relations. It is clear now that the war was not at all quixotic and that Gorkhali troops gave an excellent account of themselves before being forced to the negotiation table.True, they lost territory, but their prestige as fighting men was enhanced, and they preserved their heritage of independence.

This new appreciation of Nepal's role in the war has proved to be very soothing for the growing sense of Nepali nationalism, but it too has failed to discern and discuss a critical aspect of the war and the peace that followed. How, it must still be asked, did this war and the peace of Sagauli affect the quality of life in village Nepal?

The Nepal-East India Company war is now history, of course, and no amount of discussion will change the results. However, the war and the peace of Sagauli still have much to teach us about the Nepal we know today. While it is true that today's forces are marshaled not against the East India Company but against poverty, disease, and the entrenched conservation of rural Nepal, the mistake is to assume that there is no connection between the one and the other. We can fully understand the problems of today only when we know them in their origins, and this forces us to go back through the pages of history, to re-flight and re-live the war and all that it implied. Only then can the full trauma of the treaty of Sagauli be understood.

A.   The Nepal-East India Company War

In the years prior to 1814, the defense of Nepal rested on three solid supports. The first of these was terrain itself. Not only were the Himalayan foothills, where most of the fighting was to take place, uniquely difficult, they were unknown to the British. British generals were ignorant of the trails through the terai forests as well as the passes through the Himalayan Foothills, and this introduced a note of deep uncertainty into their strategy. More important, the men of the line had no experience in mountain warfare of the type the Himalayas imposed. Secondly, there was the courage and tenacity of the Gorkhali soldier, whose spirit was nourished by a record of brilliant successes over a period of more than fifty years. And thirdly, there was the very real possibility that stout Gorkhali Defense would encourage the Marathas and Sikhs to throw their military resources into the fray against the British and broaden the theatre of war.

When efforts to negotiate the settlement of a border dispute between the government of Nepal and the East India Company failed in the summer of 1814, the governor general had issued Nepal a challenge that led to war, and Bhim Sen Thapa had accepted it. Both the British challenge and the Nepali acceptance grew out of two distinct sets of facts. The first set of facts the cause of the dispute. The second explains why war seemed to Nepalis to be an acceptable solution to the dispute.

The first set of facts was rooted in the nature of both the Gorkhali and the East India Company's conquests as well as in official ignorance on both sides of actual conditions in the terai. Neither the East India Company nor the Gorkhali had actually conquered territory in the course of their expansion. They had overthrown leaders and then assumed control of the deposed leaders' governments, and the lands dependent on these governments automatically became theirs. Neither Nepal nor the East India Company had records of their own to establish their title to the lands they claimed. Each was forced to rely on the records, such as they were, of the raja whose claim they inherited as a result of their conquests. They claimed what former rajas had claimed. But no one actually knew the validity of those claims nor the precise boundaries that should be set to them.

Along the southern Nepal border there were no clear titles. The extreme inaccuracy of the maps of the day, built up as they were from reports and hearsay, reflect the confusion that existed about the Terai in general. As far as political claims were concerned, the history of the area was most discouraging. During the pre-Gorkhali period in Nepal, hill rajas regularly raided into the plains as far as they could do so. In reply, the rajas of the plains detended as much of their northern territories as they were able to defend and then organize their territories politically within that line of defense. The limit of the hill rajas' raids and the plains rajas' defense varied according to a number of factors, which for all practical purposes created a twenty mile wide strip along the border whose ownership could easily be disputed. To make matters worse, this border area was infested with a very virulent form of malaria, known locally as aul fever, to which the local Tharu people alone seemed to have been immune. This effectively discouraged the residence of higher ranking government authorities, and left local matters very much in the hands of local people. Border disputes between Kathmandu and the East India Company could have arisen anywhere along the Terai border, but in fact they developed in two specific areas. In both of these areas, negotiations might have settled these disputes had the policies of either government favored a settlement.