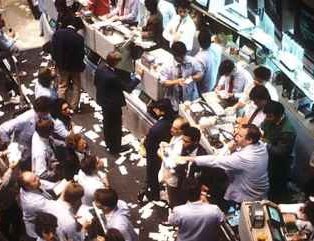 Although Nepal’s overall economy is not working as desired, with almost all institutions in some trouble, it has not made much of a difference to the investors investing in Nepal Stock Exchange (Nepse).

As soon as Nepal Rastra Bank’s new monetary policy 2014/015 was issued, Nepse index increased by a whopping 29.8 points, close to a 70-month high. As it continues to go up, there is no sign of the trend receding any time soon.

Apparently, Nepalese small or medium level investors have found Nepse as the right choice for investment. But as the rise of Nepse is not genuine, thanks to manipulation by some investors, it is likely to crumble any time.

With the appointment of Dr. Ram Sharan Mahat as the finance minister, Nepse started to increase. In the last five months, it was rising quickly, breaking the past records.

Although the budget for 2014/15 had not encouraged investors, the new monetary policy, which gives space to Nepse, seemed to have rejuvenated them.

“The astounding surge in the benchmark index is because of the monetary policy," Anjan Raj Poudel, proprietor of Thrive Brokerage House, said. Poudel said that the monetary policy came up with some supportive policies which they had not expected.

As the central bank did not extend the deadline for bank and finance institutions (BFIs) to maintain their required paid-up capital, they are now required to issue bonus shares or rights shares to increase their capital base.

“Investors went after the stocks of commercial banks, development banks and finance groups & companies, particularly of those with low capital base,” he added.

Demand for shares of commercial banks like Kumari Bank Ltd and Nepal Credit and Commercial Bank Ltd, which are yet to meet the paid-up capital requirement, were high.

The demand for finance stocks was so high that Nepse was forced to clamp circuit breaker on trading of the stocks of finance companies.

Narendra Raj Sijapati, president of Stock Brokers Association Nepal, said the rise in demand for stocks of finance companies was mainly due the central bank´s policy of raising capital base of micro-finance companies based in places where there is low presence of BFIs.

As Nepal’s overall industrialization process is getting a setback and BFIs' capability to invest in productive sector is yet to improve, the current bubble is likely to burst with a small manipulation. The likely loser will be small investors.

Tanahun Hydropower Construction Continues During Festival By Agencies 7 hours ago

BEEN Energy Efficient Building By A Correspondent 4 days, 3 hours ago