Over the course of 67 years there are now 29 states and many amendments have been made to the constitution. SAMVIDAN, a television programme on the constitution of India, prepared by Rajya Sabha TV has recently been shown in Nepal.

The signing of the Magna Carta by King John, a caretaker monarch in England, whilst his brother King Richard was fighting in the Crusades in the Middle East in 1215 AD is said to the start of trying to solve the conflict between the rulers and those that they ruled.  This is said to be the first the first charter of political and civil liberties or Bill of Rights.  The UK has functioned during the last 800 years without a constitution.  This fact is certainly a surprise to many of us in this part of the world who feel that a written constitution is a prime requisite.

What is however a true fact is that those who are at the top will not hand over to others the perks of power that they or their near and dear ones have enjoyed once that opportunity came into their grasp?  If one looks at the history of Nepal over the last three hundred years one finds that from the Shah rulers took absolute power from the Rajas and Rajautes scattered over the land.  They power that they wielded at that time was wrenched out their hands by the Rana rulers and subsequently should have gone into the sons of the soil from 1950.  Though a constitution was promised by King Tribhuvan in 1950s and subsequent ones were given by Kings Mahendra and Birendra, even with the aid of the politicians, these have not fulfilled the aspirations of the people.

A total of thirteen confederacy states of America, after gaining independence in 1778 prepared a constitution by 1781 and implemented it in 1789.  Over the years this number has increased to fifty states that now comprise the USA. It not a sacrosanct document and has been amended a number of times.

The French revolution of 1789 lasted for ten years.  Since then, because of its varied political situations France has, gone through a number of different constitutions. They have worked their way through empires, monarchies, republics etc and should be recognised as experts in this field.

A deadline of 1st Oct. 1948 had been fixed at the time of creation of the state of Israel but it was never met.  The state has functioned on the Basic Laws which were enacted instead.  There is some demand for a Constitution but nothing concrete.

Dr. BR Ambedkar is credited to being the architect of the Indian Constitution that has been in force since 26th January 1950 when India became a Republic as a Union of States with 13 constituents. Some of the states initially were on linguistic basis.  Over the course of 67 years there are now 29 states and many amendments have been made to the constitution.  SAMVIDAN, a television programme on the constitution of India, prepared by Rajya Sabha TV has recently been shown in Nepal.

Since the time that Nepal became a Federal Democratic Republic in May 2008 when GP Koirala was the incumbent PM there have been till today a total of seven PMs, giving an average of one year each.  The way that the constitution process is going on, with each of the parties sticking to their party demands and not shifting ground it looks as if candidates from all parties’ ranks are waiting for their chance.  Are they playing musical chairs?  How long is this state of flux going to last?  One has only to think of the various votes that took place in the house when Ram Chandra Poudel had his spat with Jhal Nath Khanal for the same.  Apparent aspirants at present are said to be KP Oli, Sher Bahadur Dueba and others.

Present Chairman of the House, Subas Nembang was criticised when he did not take active steps regarding the constitution at the end of the term of the first house.  His request for giving authority and the attempt to correct it this time around has not been accepted by the members of the opposition benches.  A 30 (within the house 19) party Morcha led by Pushpa Kamal Dahal of UCMN (Maoists), had made suggestions which had not been accepted and the attempt to make a constitution by majority decision led to mayhem. The fiasco created by members of the opposition in the early hours of 23th Jan. 2015 was a disgrace.  The antics of the opposition, who acted more as goons and ruffians than members of our highest constitutional body was terrible.  Their disgusting behaviour reminded me of an old American song, the words of which went:

‘Hang down your head Tom Dooley,

It seems that all the commitments in election manifestoes, the various proposals and the posturing by the group led by PKD were all part of a natak to created confusion and complacency amongst us Nepalis. However, many supporters insist that the Maoists, when they had a majority in the First House could have framed a constitution by this method but did not do so hoping for consensus. That may be so, but the situation now is fluid again and it seems that consensus is the necessity of the hour.  This seems the only way forward and this is what many have concurred with.  Let us ordinary folk pray than common sense prevails.  A surprising fact is that one of the main architects of this present drama referred to a constitution as just a ‘piece of paper’.

What must be kept in mind is that the Constitution is a document that can be modified by mutual consent as and when necessary in future years.

Mind Your Plate By Areet Narang Bastola 6 days, 2 hours ago 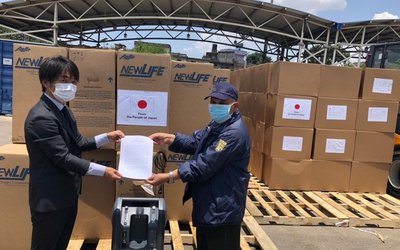 The Government Of Japan Supports Nepal To Tackle The COVID-19 Pandemic By KIKUTA Yutaka 1 week, 2 days ago