Nepal, a member of LDCs and mountainous countries, is extremely vulnerable to implications of climate change. As Conferee of Parties (COP 21) of the United Nations Framework Conference on Climate Change (UNFCCC) is going to be held in Paris with ambi 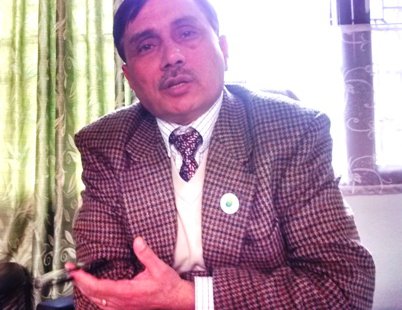 Why do you think Paris conference is important for Nepal?

This is going to be a very important conference in the history as the parties will have to come out with a new international agreement to respond to the future climate crisis. As climate change has already affected the least developed countries like Nepal, Nepal will side with other LDCs to agree to limit the global average temperature rise to 1.5 degree Celsius based on pre-industrial levels. Minister of Science, Technology and Environment Bishwendra Paswan will lead the Nepalese delegation in COP 21. The ministry has made intensive preparations for the conference. Nepal has been actively taking part in COP as party to the UNFCCC and Kyoto Protocol. Since Nepal successfully led LDCs group in 2013-2014 Convention and played its role, we will continue to play our part effectively in COP 21 as a member of LDC. We will actively push our agenda as in the past.

What will be the difference between the past and the present?

The Paris Conference is going to be historically important as it is going to fulfill all its earlier commitments. Nepal will present the effects climate change is having in the country and its own geographical and geo-political situation. We will table our past agenda as well as presenting some new agenda as well. As with all LDCs, Nepal will raise the issue to limit the temperature rise to 1.5 degree Celsius. We will request Parties that Nepal has high expectation on Paris and we don’t want to be disappointed.

How do you describe the present scenario?

Even after two decades, the developed and developing countries continue to increase the carbon release, contributing to rise of global temperature.  However, the LDCs like Nepal, which has contributed a negligible amount of green house gas emission, is facing all the consequences. As the global temperature rises, Nepal will be one of the most vulnerable countries to the impacts of climate change.

Are you raising the issue as a mountain country?

We will do so, definitely. There is the need to break the tradition of mountain countries like Nepal being left to suffer from the effects of climate change.  Mountainous countries have been the major sufferers. Although Nepal emits very negligible amount of green house gas, it has suffered a lot annually from natural disasters like floods. The countries which emit more green house gases need to come out responsibly.

What about the resources?

Those small and LDC countries, which do not have capacity to cope with the effects of climate change, should be given access to resources so that they can implement programs for adaptation. The resources should be available for us as our projection and assessment are timely.

Don’t you think the time has come to change the basis of dividing negotiations groups?

Has the process started?

Breaking the economic indicators, Small Island Nations have already formed the group on the basis geography. In this group all kinds of countries are members including LDC, developing and developed ones. Nepal has also proposed to form a group of Small Mountainous Developing Countries in the last meeting in Germany. This group's voice will be raised in the coming Paris meeting.

Is Nepal lobbying for this?

We have been lobbying for a Group of Small Mountainous Developing Countries. There is the need to have different programs to deal with the effects of climate change in the high mountains and hills. There is need to have special programs to prevent the snow melting and water tower as there is a different group for small and island nations with an aim to raise their concerns of sea level rise and threat of submerging. We have been demanding separate fund for them. Small mountainous developing countries also need such attention and consideration. This is in the interest of Nepal because Nepal has already made commitment to qualify from LDC to developing countries by 2022.

Given the present crisis, do you think Nepal will qualify?

There may be some delay by a few months or years. However, Nepal will definitely to graduate. After Nepal graduates from LDCs, we don’t know which group Nepal may join. If there is a small group of mountainous developing countries, Nepal will join that group.

Since there is the LDC and Developing Countries Group, why does Nepal need a new group?

Nepal needs that platform because Nepal is a country of Mount Everest, highest peak of the world. Nepal needs to enhance its capacity to lead small and mountainous countries following the graduation from LDCs. We will raise the issue of formation of this new group which will give us a special recognition as a country.

What other issues is Nepal going to raise?

Other issues we are raising are the place for those countries which qualify from LDC to Developing Countries. There will be a period of transition. We may qualify from LDC to Developing Countries. But, we also need to be serious not to have resource crunch in the transition period. As we have been receiving certain benefits as LDCs, there is the need to continue such benefits during the transitional period. There is the need of support for us for a certain period in qualifying for the upgrade from LDCs. If the transition period is not handled well, we will have more difficult situation.

What are other agenda?

Adaptation, mitigation, finance, technological transfer, loss and damage -- we have our own stands as well as LDC’s stand.  Adaptation and mitigation are both important for Nepal. Mitigation is not our compulsion. We need to invest more resources in adaptation and Nepal is under a severe threat.  There is the need to make adaptation fund more wider and easily accusable.

What about LDC Fund?

So far as the LDC Fund is concerned, it should ensure fulfilling LDC’s needs. The developed countries need to address the needs of the LDCs in tackling climate change and deliver climate finance as per the commitments and responsibility of the convention. We can get the funds from both. Along with receiving the resources from LDC fund, Nepal also needs additional fund as a small mountainous country. As most of the small mountainous countries are landlocked, they are facing many problems.

What are other such challenges for Nepal?

Nepal needs to enhance its capacity given the present scenario. With the temperature rise, our Himalayan peaks are under severe threat as the snow is melting, and GLOF, floods and landslides are other threats . This will ultimately harm the small Island nations. There is the need to link the countries from sea to Himalayas to prevent the natural calamities. Whether we talk about LDC or Small Island Nations, there should be a group for small mountainous developing countries. They have their own unique importance.

It is often complained that there used to be a jamboree in COP, how big will be Nepal’s delegation this time?

Believe me there will be a smaller delegation this year. We have drought so that there will be no flood. We also heard the complain that a few people disappeared in foreign countries last time. We are very concerned not to let such things happen. We are aware about this. We have a lot of pressure but we cannot take a lot of people.  There will be a small participation. There will be experts from various ministries and National Planning Commission. What I can say is that our team will be smaller.

What about the groups going from outside the government?

People from other ministries will go on their own for their own program. The budget will be allocated from different resources.  One of the good things is that we hosted an international conference last year highlighting the success achieved by Nepal’s adaptation program. We received global recognition for that. During the conference, various delegations visited the program Nepalese farmers and communities had launched. Nepal Climate Change Support Program has made a tremendous success and it is likely to get space in Paris. Our aim is also showcasing our successful programs.