As the government has announced several programs to improve the service delivery and reach to the victims of earthquake, Chief Secretary DR. SOMLAL SUBEDI spoke to NEW SPOTLIGHT on various issues. Excerpts: 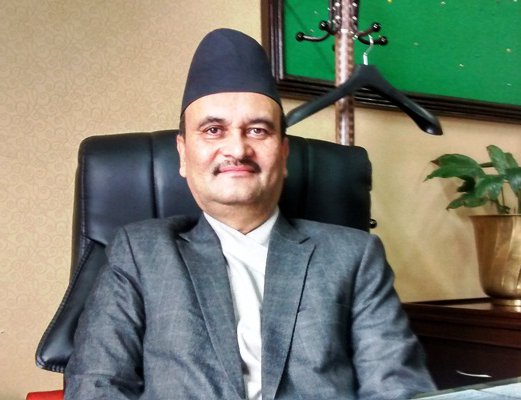 As the government has already announced the housing grant to earthquake victims through National Reconstruction Authority (NRA), there are reports of a lack of coordination between government line agencies and NRA. How do you look at this?

Statistics is the fundamental problem in carrying out the reconstruction work effectively. In a high level meeting held a few days after an earthquake, I said that further relief should be announced only after providing first installment of Rs.15, 000.00 to all victims. Had my suggestions been accepted, we would have accurate statistics now. At that time nobody listened to me and did a survey which is reportedly inaccurate. NRA has again sent a survey team to collect accurate statistics.

What is the state of distribution of cash?

As per earlier announcements, NRA is now distributing money through banks for construction of shelters. NRA has already opened some cluster offices in the districts and some are in the process of opening. We have already posted joint secretaries and other employees at NRA. The government is now working in complete coordination with the NRA to carry out the reconstruction work in earthquake affected areas. The prime minister has already expressed his commitment to carry out the reconstruction work effectively.

How do you see the level of coordination at the district level?

Since the chief district officer is the head of District Disaster Relief Committee and Local Development Officer and other chiefs of line agencies are members, the initial period of rescue, relief and rehabilitation work completed successfully. After looking at this model, I suggested establishing district offices of Ministry of Urban Development in all 14 earthquake affected districts.  However, this policy came to implementation only after I became the chief secretary.  As NRA has already dispatched over 1400 engineers and Ministry of Urban Development has also dispatched engineers in the district offices, there will be enough technical manpower now to carry out reconstruction work effectively.

At a time when Nepal is in the process of making provinces and carrying out the mammoth reconstruction work, how do you see the role of the chief secretary?

So far as the implementation of federalism in the country is concerned, I have been repeatedly saying we still don’t have a political roadmap. To implement the federal system, there is the need to restructure our service delivery institutions at village, municipal and district levels. There is the need to restructure them to make them viable for service delivery. The constitution has already declared Nepal as a federal country with seven provinces, hence, the challenge before us is to restructure the service delivery units of the districts. This includes redrawing the boundaries of the VDCs and DDCs. For all these, there is a need of political consensus. Bureaucracy alone cannot do this.

What is the state of coordination in restricting?

Where are the problems?

The problems now are in the designing of provinces. The headquarters of provinces are yet to be announced. The institutional set up to hand over the power is yet to be announced. Where should the power be handed over and where should the employees be handed over.  There are no such systems even at the local bodies. This is purely a political matter. It is not as per the spirit of constitution to take this initiative through bureaucracy. It will be very difficult for us to work in the absence of a roadmap with political consensus. The government is positive to take forward the issue. We have already constituted the committee to carry out the mandate. This issue is in the immediate reform plan of the government.

How can you improve the service delivery?

As development practitioners have been complaining that there is no coordination among DDC and other line agencies at the district level to effectively carry out the development activities, what do you say?

It depends upon the leadership of local development officer.  If an LDO has good leadership quality, he or she can settle most of the problems. There will be problems in case LDOs have no skills. This is once again the responsibility of all the concerned ministries to ask the concerned line agencies to work in a coordinated manner. In meetings, I have already directed the secretaries of concerned ministries to look into this matter. Things are not moving as per our direction. Ministries are not taking my suggestions not to transfer project and department heads till June. This could not be materialized. The transfer of the employees is creating a lot of problems. In some areas, there is the constraint of resources and lack of working culture. Each line ministry has their own issue. We don’t have any culture to minimize the impacts of the problems.

As Nepal’s current capital expenditure rate is reportedly low, in a recent meeting of national development problems settlement committee, even Prime Minister K.P.Sharma Oli suggested the need to increase the capital expenditure. How do you look at this?

Of course, our capital expenditure rate is very low. Frankly speaking, this year’s trend is not satisfactory but it is not worse than the last year either. Last year, the capital expenditure by April 13 was 29 percent. Given the difficult situation, this year, it is 20 percent in the same period. Our capital expenditure has been in a similar ratio for a long time and there is the need to change the legacy. The prime minister has himself directed the secretaries to accelerate the spending of capital expenditure. I have been repeatedly taking up the issue with the secretaries. We have been taking initiatives and the institution has to take the ownership as the problems are institution-specific. The cabinet secretariat is providing all kinds of support, even changing the policies. However, institutions have yet to change their behavior.

Even after the several efforts, why is the performance of the national priority projects has not improved?

Following my promotion as the chief secretary, I have introduced performance agreements for the appointment and transfer of heads of the departments and projects. The aim of the performance agreement is to give a single person the main role from designing the project till its completion. Our experiences have shown that the frequent transfers of the employee are responsible for delaying the project completion dates. Project implementation pace is always in transition due to frequent transfers. There is the need to develop a system to reward and punish heads of the project for their work. I have often been saying this.

How do you see the frequency of transfers?

This year the number of transfer is less than that of the past few years. However, there is no reason to be satisfied. If we want to see the project completed in time and increase the capital expenditure, project chiefs should be given a long time. Everything depends upon work, social and political environments. Our legacy is that we are developing the new projects every year, however, we add only a few employees. I have also suggested not to implement new projects this year. Focus should be given to previous projects.

There are frequent changes in the Civil Service Act. Even an effort has been made to bring new amendments during your first year tenure as chief secretary. How do you look at this?

There is a rumor that the amendment was sought to increase the retirement age?

This is related to a package for retirement, particularly the issue of pension. We need to look at the pension in a holistic manner. Even after increasing the age from 58 to 60, it will make just 10 percent differences. The pension should be guided by a contributory scheme. I have directed the Ministry of Finance. It is not a big issue. Actually, teachers are getting highest pension. The pension should follow a contributory scheme.

What do you suggest to make the projects effective?

How do you see the performance of projects?

We are adding the projects every year. They are increasing expectations of the people. There is a big gap of resources and manpower. We need to categorize the projects and revisit them.  We need to use strength of donors in the interest of Nepal. We need to institutionalize the projects which come from the knowledge of donors with competitive discussions. This is a two-way process.

The Fourteenth General Convention: An Aspiration Of NC’s Reawakening By Arjun Narasingha KC 3 weeks, 1 day ago