It is suggested that silver punch mark coin that were discovered in Nepal subsequently must have been imported from the Maurya Empire in the sub-continent. 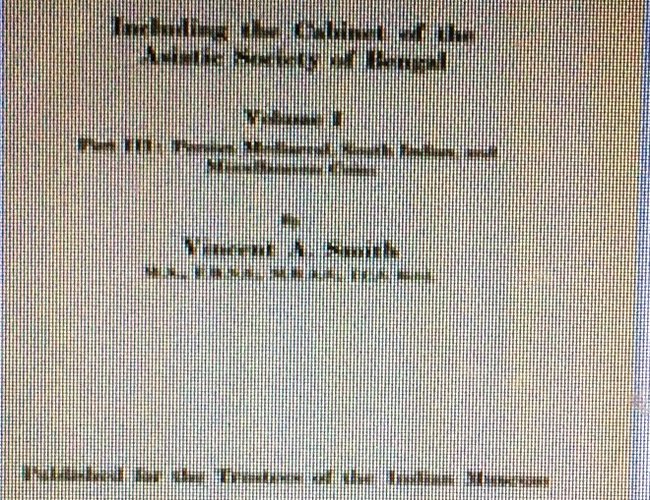 The Shakya kingdom which existed in around 5oo BCE is said to be the first kingdom of Nepal which minted coins. It is suggested that silver punch mark coin that were discovered in Nepal subsequently must have been imported from the Maurya Empire in the sub-continent. The coins of the Kushan Empire, formed by Yuezhi, in the Bactrian territories in the early 1st century CE, were said to be rarely used in hills and Kathmandu valley region.

Vincent A. Smith's Catalogue of the Coins in the Indian Museum Calcutta Including the Cabinet of the Asiatic Society of Bengal, Volume I (Part III: Persian Mediaeval, South Indian, and Miscellaneous Coins) (Oxford: Clarendon Press, 1906) includes references on coinage in classical period of Nepal. Smith points out that Nepal was part of the Ashoka Empire. Ashoka died in c. 232 BCE. In the fourth century AD Nepal was no longer under the control of Samundra Gupta (330 to 380 CE), the son of King Chandragupta. Smith claims that about 637 AD King Harsha Vardhana took Nepal under its control again. But by the time of his death Nepal had become a dependency of Tibet.

According to Vincent Smith, an Irish born Indologist, Nepal's numismatic history begins in the sixth century. During this time, the Lichchavis used to rule Nepal. The Lichchavi Kingdom existed in the Kathmandu Valley from approximately 400 to 750 CE. A series of large copper coins bearing the names of Mananka, Gunanka, Vaisravana, Amsuvarman, Jishnugupta, and Pashupati were used during the sixth century. Amsuvarman ruled Nepal between 640 and 650. He was succeeded by Jishnugupta. Their rules have been evidenced by inscriptions of their period. The testimony of the Chinese pilgrim Hiuen Tsang also proves that Amsuvarman was reigning at that time, and that he was succeeded by Jishnugupta. Smith notes that "the dates of the coins inscribed with the names of Mananka, Gunanka, Vaisravana, and Pashupati cannot be determined with equal precision, but those of Mananka may be assigned to the sixth, and the latest, those of Pashupati, to the eighth century. Vaisravana and Pashupati probably are the names of deities, not of kings."

King Raghava Deva, a Thakuri king, founded a ruling dynasty in Nepal in 879 CE when the Lichhavi rule came to an end. He also introduced a new era, the Nepal Samvat or Newar Samvat, the first year of which began on October 20, 879 A.D.  Relying on M. Levi, Smith mentions that the establishment of the Nepal Samvat was the official declaration of the independence of Nepal, "which then severed its political dependence on Tibet." There are no additional references in this regard.

New coins are found in Nepal again at the beginning of the seventeenth century after a long gap. By this time, the country was already divided into the three principalities of Bhadgaun, Kathmandu and Patan. Smith finds that the first recorded coin date to be 751 Nepal Samvat i. e. 1631 AD. This coin was minted by King Siddhi Narasimha Malla of Patan. There is also a mention of an undated coin of King Lakshmi Narasimha Malla of Kathmandu. He reigned from 1595 to 1639 A. D. Referring to a chronicle, it is stated that the first silver coinage of Nepal was struck in the sixteenth century. It was done by King Mahindra Malla of Kathmandu. It is stated that he visited Delhi to obtain special permission from the Emperor, presumably Akbar, to mint new coins. Smith clarifies: "the coins of the Malla Rajas of the three principalities are dated, if dated at all, in the Nepali or Newar era, and the series extends up to the Gorkhali conquest in 1768 AD." The new dynasty continued minting new coins, but dated them in the Saka era, rather than the era established by King Raghava Deva.

On the technical side, Vincent Smith has a clear general impression: "The ancient copper coinage of Amsuvarman, is closely allied to the Yaudheya coinage, and, like it, is descended from the Kushan.  The heaviest of the specimens catalogued weighs 208-4 grains, and may have been intended for a 1.5 pana piece of about 219 grains. The Malla coinage, in silver only, seems to have been struck to the Delhi rupee standard of 175 grains. Some specimens exhibit imperfect attempts to copy the Persian or Arabic legends of the Mughal coinage. All the known coins are broad thin pieces about an inch in diameter, generally weighing about 85 grains. The heaviest recorded weight for these half-rupees is 87-5 grains for coins of Siddhi Narsinmha of Patan and Ranajita Malla of Bhatgaon. The types, excepting a few pieces which attempt to copy the Mughal coinage, are local in character."

Distingushing between Malla coins and Gorkhali coins, it is pointed out that the Gorkhali coinage bears a general resemblance to that of the Malla Rajas. The Gorkhali coinage is struck to the same standard. The difference is that it includes "examples of whole rupees, as well as of fractions smaller than the half." King Girvan Yuddha Vikram and Surendra Vikrama issued gold coins during their rule. These coins were similar to the silver in weight and design. King Surendra also emitted an extensive copper coinage.

Smith has a bold conclusion: "the Nepalese prefer the so-called ' dumpy pice,' rough lumps of copper manufactured by private persons, which are largely used to this day, not only in Nepal, but in the adjoining British districts."

The Impacts Of COVID-19 On Women-Owned Businesses By Novela Acharya 2 days, 9 hours ago