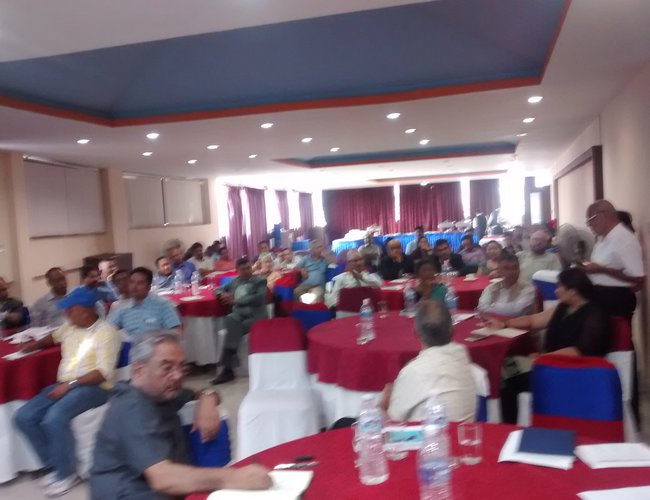 Climate change is continuously and increasingly challenging the life and property of Nepali people and ecosystems, thereby making more people climate vulnerable. Increasing amount of greenhouse gases (GHGs) emissions at the global level has increased temperature. GHGs emission from Nepal is only 0.027 percent of the global total but average annual maximum temperature rise is observed 0.056 0Celsius per year with higher rise in the northern part of the country (the high Mountains and the High Himalayas). During the last 44 years, highest temperature rise (0.120C/yr) has been observed in Manang district in winter season. However there is no clear increasing trend on average annual precipitation. Number of rainy days is increasing significantly mainly in the north-western districts and the number of dry days is decreasing. Warm days and warm nights are significantly increasing. Temperature rise and high amount of precipitation in a shorter period has adversely affected the Nepali people, property, their livelihood and ecosystems. Although Nepal has almost no contribution in global warming, Nepali people are experiencing adverse impacts from climate change. Hence, we should make every effort to adapt to, and build resilience to climate change impacts.

Scientific evidence on changing climate system nearly 3 decades back created a momentum to negotiate and adopt the UN Framework Convention on Climate Change (UNFCCC) in 1992, Kyoto Protocol in 1997 and Paris Agreement in 2015 to address climate change impacts globally. These instruments entered into force in 1994, 2005 and 2016. During the last two and half decades of the adoption of the UNFCCC, several initiatives are in place to reduce GHGs emissions and help poor and vulnerable countries to adapt and build resilience to climate change. However, repeated climate-induced disasters have claimed many lives, properties and destroyed the functioning of life-support systems. The political commitments from Heads of the States and the Government in 2009 (Copenhagen) and 2015 (Paris), including other sessions of the Conference of the Parties (CoPs) to the Convention, Protocol and the Agreement has changed over the years, and sometime climate change becomes the 'talk of the global poor'. Although effect of climate change is indifferent to the 'rich' and 'poor', rich countries have the coping capacity to even higher level of adverse impacts while the poor people face survival problem and have been repeatedly washed away from climate-induced floods. Many people believe recent hurricanes linked to climate change.

Parties to the Convention, Protocol and the Agreement will meet Fiji (incoming Presidency) hosted climate change conference (CCC) from 6 to 17 November 2017 in Bonn, Germany. The COPs will redouble efforts in advancing the implementation of the Paris Agreement as a 'step forward' solution to address climate change impacts, individually and jointly. Fiji is determined to maintain the momentum of the 2015 Paris Agreement, make concerted effort to reduce GHGs emissions and lower the global temperature.

'Pre-matured' entry into force of the Paris Agreement and recent political withdrawal of the USA on this Agreement may invite 'tough negotiation' on transparency of action and support, GHGs emission reductions and provision for financial contribution. Several parallel sessions of the Fiji-Bonn CCC (COP 23, CMP 13, CMA 1-2, SBI 47, SBSTA 47 and APA 1-4) will make difficulty to delegates who normally attend such negotiating meetings without necessary preparation and without country's national positions. In many cases, COPs have been an opportunity to Party delegates to learn the negotiating processes, understand key climate change issues, and lead and represent the group in several fora and constituted bodies. Since 2008, Nepal has successfully completed the responsibility of SBSTA 'rapporteur', chairs of the LDC Coordination Group, LDC Expert Group and Adaptation Fund Board and is currently members of the LEG and WIM on Loss and Damage, representing different negotiating groups. In addition, COP provides ample opportunity to 'reposition' Nepal on her initiatives in addressing climate vulnerabilities, linking adaptation with livelihood, and promoting low carbon development approaches by sharing knowledge, experience and lessons learned.

Nepal's climate change adaptation efforts, in particular LAPA process, are 'acknowledged' in previous sessions, and her approach of formulating the national adaptation plan (NAP) through multi-stakeholder working groups coordinated by 9 competent ministries and led by UNFCCC focal point has been well appreciated by the international adaptation community. Nepal's priority is on adaptation to protect our climate vulnerable communities from accelerated climate change impacts. NAP process would be one of the key initiatives to share with the international community. Nepal should actively engage in 'adaptation negotiation' and urge for 'additional finance'. Sporadic researches have noted less than 10 percent flow of climate finance to actual climate vulnerable communities. Nepal should showcase her effort in channelling more than 80 percent of the fund to field level adaptation actions based on Climate Change Policy (2011).

The Ministry of Population and Environment, UNFCCC focal point, organised pre-COP 23 consultation program on 13 October 2017 and shared draft 'status paper for Fiji-Bonn CCC'. Inputs of the participants would have been useful to revisit and clarify the several 'unclear issues'. Re-thinking on national priorities right from its engagement in the UNFCCC process might help to avoid confusion and priorities of the government delegation and other Nepalese participants attending the COP sessions. Nepal can offer her experiences and achievements on climate change adaptation in particular LAPA to attract the attention of the international community to address the needs of the climate vulnerable Nepalese communities, their livelihood, and ecosystems.

Border Dispute Between Nepal And India By Dr. Prabin Manandhar 2 days, 14 hours ago

Towards 'Carbon Neutrality'! By Batu Uprety 3 days, 9 hours ago