Politics And Our Economy

A mid-way involving concession from both sides will have to be worked out if the idea is to save the party from further degradation. Deuba will have to appreciate the demand of the changing time, while those wishing to see him out at the earliest should not forget that he is the strongman of the party till date and can afford to take negative remarks about him as nothing more than tantrums of the disgruntled leaders. 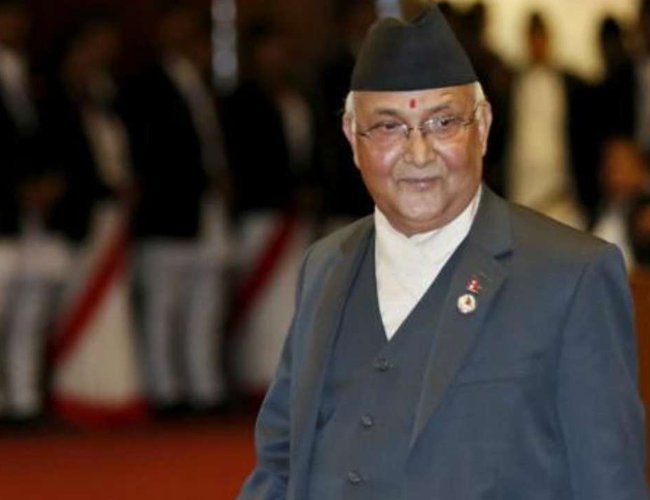 Prime Minister Oli’s visit to India this time, soon after assuming power, remained relatively less controversial as he was well received and also given a warm send off, maintaining perfect decorum and profusely extending hospitality to our head of government and his entourage. Several crucial agreements were signed and the joint communiqué also appeared on time, unlike in the past when Oli’s visit, during his first stint as Prime Minister, became conspicuous by the non-appearance of the communiqué, ostensibly as a result of the reluctance of government of India to let its head sign it. Therefore, there is no sense in refuting Oli’s observations that the visit was successful in making bilateral relations harmonious. He is also reported to have told the Indian side that the starting point of Nepal’s foreign relations was the friendship based on openness, mutual respect, non-interference, mutual benefits, and respect of sovereignty, freedom, legitimate mutual interests and dignity. He also believes that both sides would work to ensure swift implementation of bilateral projects that were under way and the new agreements that were signed during the visit including Kathmandu- Raxual railway, inland waterways giving Nepal access to sea, and partnership in the field of agriculture modernization. It may be mentioned that the twelve-point joint communiqué, issued by the two prime ministers, focuses on expanding connectivity to enhance people to people linkages and promote economic growth and development of the two countries. In addition to agreeing with Oli’s claim on the visit, let us also hope that the observation of the Nepali members of the Eminent Persons Group on Nepal India Relations that the recent visit of PM Oli  has helped resolve long-standing bilateral issues with the southern neighbor is not far from reality.

The happiness\satisfaction that emanated from the visit, however, could not be further energized on return as Oli faced Prachanda and found him seeking clarity on responsibilities of dual leadership, methods of electing leaders in the unity convention and policies and ideology of the merged outfit. Prachanda’s often repeated saying that party unification would take place on the basis of the principle of equality and raising of contentious issues by him were enough to let anyone guess that the unification of the two parties would not happen on April 22 as said earlier. Expectedly, it did not happen on the day of Lenin’s birth anniversary and establishment of Nepal Communist Party. However, despite serious unity-related reservations on both sides, Oli and Prachanda have assured their followers that their parties would surely unite. They have blamed the delay on the time needed to resolve technical and policy issues. Despite these intermittent hiccups, Oli should not forget to deliver the goods without much delay because people know that he does not have the luxury of time, confession made by him earlier probably on account of his poor health, and are not in a position to be satisfied with mere assurances. In the meantime, it would be unfair not to make a mention of the Oli-led government’s praise-worthy decision to ban the transport committees or associations for ending syndicates in the sector. Different associations and people at large have long been demanding an end to all kinds of syndicates, cartels and queues in transport sector. Increasingly isolated, the transport entrepreneurs, who had unveiled a series of protests against the decision to ban transport associations, seem to be quietly backtracking on the protest as some of the associations have made the move to register as companies. People expect these kinds of bold decisions from a powerful government to end exploitation of the mass by a few. Oli has bagged some political capital for him and his party. His address to the nation on the occasion of New Year 2075 from Rara lake in Mugu, expressing his commitment to working with honesty for fulfilling people’s aspirations, although failed to impress people meaningfully, was definitely worthy of paying some attention to.

Much more serious look the wrangling in the major opposition party NC the central committee meeting of which, held basically to review the electoral debacle, is continuing for  days in which party leaders are seen divided in two distinct groups, trading accusations. Many senior leaders  blamed Deuba for the disappointing electoral performance and demanded that the party’s general convention be held at the earliest to effect meaningful changes in its functioning.NC leader Prakash Man Singh took the lead in attacking Deuba and was followed by other leaders such as Krishna Prasad Sitaula and K.B.Gurung. Gurung went to the extent of withdrawing the proposal he had filed in the party’s general convention to make Deuba NC president. He conceded that it was his mistake to propose Deuba’s name for NC president in the thirteenth general convention. Alleging that Deuba had ruined the party by his misdeeds, he demanded that conventions of all party committees and general convention be held within six months to elect a new leadership. Sitaula, another NC leader who was himself a candidate for the post of party president and had ultimately helped Deuba get elected, also announced that the support extended to Deuba was withdrawn. Further, seven young leaders of NC presented a document in the committee, which demands early holding of the general convention to choose a new leader who should be able to run the party effectively in the changed context so that NC regains its lost position in the election to be held after five years. Despite counterattack by Deuba’s followers that it would be unfair to put the entire blame on the leadership as different factors came into play during the election, NC leadership is having a tough time and will have to act sensibly so that he finds a reasonable time period to work for the party in the changed context. Those blaming Deuba for the humiliating defeat and seeking change in leadership should also not forget that confrontational approach would not help them much as Deuba still enjoys a comfortable majority in the party and the group opposing him has yet to decide on a person to challenge the current leadership even if the special general convention of the party is held soon. It may also not be forgotten that Deuba, despite several deficiencies, has remained a fighter ever since his student days and is a skillful manipulator and is not likely to relinquish responsibility soon as wished by many NC leaders. A mid-way involving concession from both sides will have to be worked out if the idea is to save the party from further degradation. Deuba will have to appreciate the demand of the changing time, while those wishing to see him out at the earliest should not forget that he is the strongman of the party till date and can afford to take negative remarks about him as nothing more than tantrums of the disgruntled leaders. Contrary to general expectation, the dispute between the two factions over whether the poll performance report should mention that the leadership’s weaknesses and violation of party statue were also behind the loss in provincial and parliamentary elections is not likely to create much problem as the party has decided to assume collective responsibility rather than blaming the leadership alone for the debacle. Deuba appears a winner in this context as he and his followers in the central committee were resisting attempts by rival groups to put the entire blame on him alone.

Prime Minister Oli, however, has very little to worry about the problems within NC as long as the much talked about unification between the two left parties does not fall apart. He should also have been little bit encouraged by the recent revelation of the Central Bureau of Statistics (CBS) that each Nepali will have an average of Rs.106, 333(US $1004 as per April 25 exchange rate) in the current fiscal year. The attributing factors according to the Bureau include vibrant activities in reconstruction, the boom in service sector and more electricity generated, which together would help GDP of Nepal increase by 5.89 percent, against the base price of 2001, in the current fiscal year. This increment can help Nepal graduate to the level of a developing country in the next three years. A welcome contrast to the bleak picture of the economy painted by finance minister Khatiwada on March 30, these revelations also show that the said increment is also due to the growth in production of goods and services and a slower population growth of below 2 percent. In GDP estimates, both the party (CBS and Khatiwada) are alike because recent estimate of 5.89 percent can be comfortably rounded up to minister’s revised estimate of 6 percent growth. There is no need for the author of the white paper to be disappointed much, looking at these CBS estimates because he can easily turn to other agencies such as Nepal Rashtra Bank (NRB), which shows Nepal’s trade deficit swelling to Rs.713.93 billion and the country’s balance of payment position remaining negative at Rs. 24 billion, to draw some solace from. However, little difficult would be to digest his “empty coffers” remarks when one remembers our government’s unspent money (Rs.277billion) lying idle at NRB. All said and done, it would be unfair to seriously blame the minister for painting a bleak picture at a time when concerted efforts are warranted to create wealth on a massive scale and redistribute the generated wealth targeting  some exploited regions and people of the country in a socialistic fashion. Without worrying about bigger things, our finance minister will have to make sure that the reduced capital expenditure (from Rs.335 billion to Rs. 234.62 billion) is spent meaningfully in the remaining period of this fiscal year, which is not easy because the amount to be spent in less than three months is about equal to what has been spent in the past nine months. Let us hope that Oli’s visit to India, immediately followed by our foreign minister’s visit to China and Modi’s almost certain visit to Nepal in May would pave way for execution of at least one mega project involving India, China and Nepal. Oli must have gathered by now that Modi of India and Xi of China have just agreed in China to do development projects together in Afghanistan. All we need to do is to urge the two economic powers to replicate in Nepal what they intend to try in war-torn Afghanistan. China has been requested to construct the much-talked-about cross-border railway between the two countries and several new agreements related to railways, inland water-ways, etc were made during Oli’s recent visit to India. In addition, several projects with full commitment of India will need speedy expedition. It looks like India and China have begun to develop an understanding to jointly cooperate with assistance-seeking countries in carrying out development works\projects, which could be taken as mutual recognition by the two of their growing economic might and political clout and the need to work together to further their influence globally. It is encouraging that the cooperation seen between the two Asian giants in issues related to world climate change and global financial governance is being extended to encompass implementation of country-specific projects, throwing a signal that the two countries are now no more mutually exclusive. Opportunities are in the offing for us to extract benefit without being accused of taking sides and changing positions, Oli jee.

A Complete Trip, Personally By Abhishekh Adhikari 4 hours, 49 minutes ago

Hindutva: Mughlani versus non-Mughlani By Dipak Gyawali 2 days, 22 hours ago

US-Iran Crisis And The Possible Impact By Binoj Basnyat 6 days, 1 hour ago