India’s attempts to reshape its neighborhood policy have started with taking India-Nepal relations back in track. Actually India- Nepal relations had reached to its lowest web during last few years over several impinging issues. 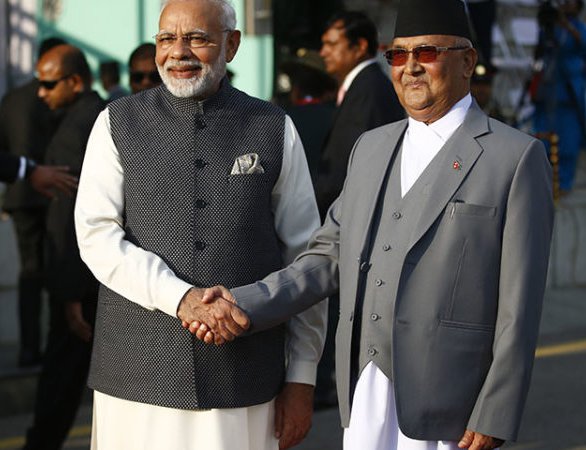 India’s good neighborly policy in the mid 1990’s was an important initiative. It succeeded to some extent except in the case of Pakistan. When Narendra Modi became Prime Minister of India in 2014 he made it very clear that neighbors will be India’s first priority. The first step he took in this direction was to invite all the heads of SAARC countries in his oath taking ceremony. It went very well and there was an overwhelming response from the neighbors. The second step that Modi took was state visits to the neighboring countries. Some of the contentious issues with some countries were also resolved during his visit. There was an attempt to create an atmosphere of friendship in the region. But relations with Pakistan again came in its way. India made it clear that peace talks are not possible with Pakistan so long it continues to support terrorism. But all did not go well with other countries as well. Thus the enthusiasm that PM Modi tried to generate at the beginning lost enthusiasm. However India has once again tried to take initiatives to reshape and revitalize its neighborhood policy.

India’s attempts to reshape its neighborhood policy have started with taking India-Nepal relations back in track. Actually India- Nepal relations had reached to its lowest web during last few years over several impinging issues. PM Oli’s visit to India in April 2018 proved an important breakthrough. Oli on the eve of his Delhi visit made it clear that the age old historical and cultural relations wit a neighbor can not be allowed to be ruined. PM Modi has reciprocated PM Oli’s visit in a shortest time on 11-12 May 2018. This was PM Modi’s third visit in the last four years period. This it self speaks of the importance that India has accorded to Nepal in the context of taking its policy of neighbor first back on track. It may be reminded here that PM Modi’s first visit to Nepal in 2014 took place after a gap of 17 years.

An Experiment in Religious Diplomacy

The Indian PM’s visit to Jankidham in Janakpur, Muktinath and Pashupatinath and his expressions that Ayoudhya and Jankidham and India and Nepal are complimentary to each other and that there is a shared heritage will go a long way in shaping relations between the two countries and has the potential to accord a new direction to their relations.

Looking in a South Asian perspective there are similar religious, cultural, linguistic and other bindings among the countries of the region. So the notion of soft power diplomacy can be useful in reshaping India’s relations in South Asia as well.

The Notion of Cultural Connectivity

India has been emphasizing strengthening connectivity in the region. Infect, connectivity is a powerful and basic instrument of binding the countries of the region together. PM Modi has tried to give a new twist to the issue of connectivity by coloring it as cultural connectivity. It is infect important to bring people, places and temples nearer but also to encourage religious tourism, which has its immense economic significance for a country like Nepal. Modi ji announced direct bus service from Janakpur to Ayoudhya. It has also been decided to connect a number of places under the scheme of Ramayana Circuit. These places are Nandigram, Shringverpur, Chitrakoot, Sitamarhi, Buxar, Darbhanga, Chtrakoot (MP), Mahendragiri, Jagdalpur, Nashik, Nagpur, Bhadrachalam, Hampi and Rameshwaram. There are many other places both in India and Nepal, which can be connected by rail or roads.

In countries like Bangladesh, Bhutan, Pakistan and Sri Lanka also such cultural connectivity is possible.

PM Modi , while speaking at a civic reception in Janakpur said that the two neighbors can work on five Ts. These are: Tradition, Trade, Tourism, Technology and Transport. He further said that these are important in order to attain progress and prosperity. It is not only that these two neighbors need progress and prosperity but rest of the countries are also looking for peace, prosperity and progress. One may hope that PM Modi would like to spread this message to rest of South Asia. It can prove to be an instrument to generate good will for India in South Asia.

South Asia is a complex region. There are common interests but there are individual sensitivities as well. There are expectations as well from a country like India. India is a larger entity in the region while others are smaller and least developed to middle range developing countries. The mutual misunderstandings, misperceptions and diversions of policies are obvious. There is always a need to take into consideration the expectations and sensitivities of the neighbours. Whenever there is a breakdown of mutuality of interests and mutual understanding there have been gaps in the relations of the courtiers of the region. India has a larger responsibility to mend fences.

During his current visit to Nepal PM Modi praised Nepali people for their successful journey from “War to Buddha.” He commended Nepal’s successful completion of three layers of elections and in bringing democracy back on foot. PM Modi also praised PM Oli’s leadership. Modi clearly mentioned that India is ready to be the closest partner in Nepal’s development but Nepal herself will have to decide its priorities. India praised Nepal’s constitutional process in the recent past but did not make any reference to Nepal’s domestic issues.

Are these any indications towards India’s attempts to reshape its neighbourhood policy? There is still time to ponder upon this question. But it is certain that India has lost much of its space and good will in the neighbourhood due to lack of policy initiatives and at times a reactionary approach. There is a need to look a fresh at its policy initiatives in the region. May one hope that PM Modi has made a modest beginning from his visit to Nepal.

Summit For Democracy And Focus On Human Rights By Professor (Dr) Surya Dhungel 1 day, 13 hours ago

Remembering Our Kings: Reflecting on Our Nationhood By Dipak Gyawali 5 days, 5 hours ago

Youth Engagement In Tourism Promotion Of Bungamati By Sreejan Shrestha 5 days, 5 hours ago

OFF-THE-RECORD TEA-TALK Need Of Pragmatism In Nepal’s Foreign Policy By THE BRAINSTORMER 5 days, 13 hours ago