The young Bhutanese are in a position to entre into serious discussions on arts, philosophy, literature and so on. 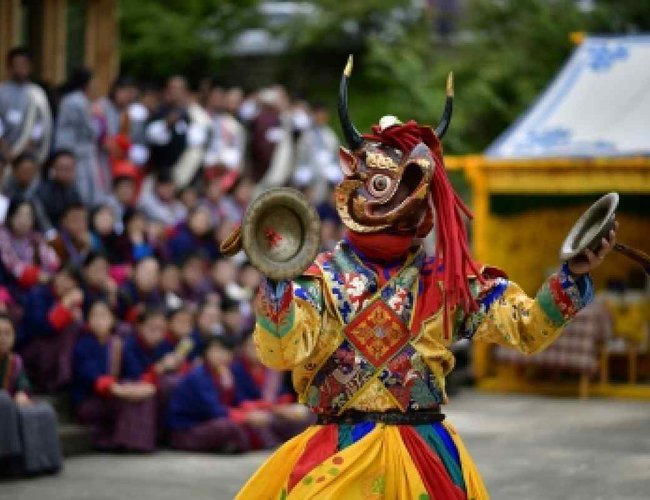 The majestic mountains, coupled with thrilling natural beauty, spiritual environment and a calm and cool place, Bhutan provides a country of unique experience in the Himalayas. A country, which has lived under the thick folds of the folds of culture and traditions of its own, is trying to expand its wings across the world in search of knowledge and wisdom across the national boundaries. One is tempted to remind that till few decades back the country was striving for modernization, education and development. But two day the people of Bhutan are moving fast in all walks of life. The young Bhutanese are in a position to enter into serious discussions on arts, philosophy, literature and so on. One significant witness to the rise of academic and intellectual traditions in Bhutan is the Mountain Echoes, which is being organized in Thimpu, the capital city of Bhutan for last some years.

The Bhutan cultural festival known as Mountain Echoes is an opportunity to celebrate cultural connectivity between people and countries. It is an occasions to connect locals with global in the arena of arts, literature and music. It provides a great opportunity to the young artists and writers who are striving for a space in a wider perspective.

The cultural festival is a very wide concept and include arts, music, literature, dance drama, film, spirituality, philosophy, performing art, food and soon. As such it is a powerful instrument of depicting the image of a country in a global perspective.

Bhutan has been organizing the cultural festival for the last 9 years. This year the 9th edition of Mountain Echoes was organized in Thimpu from 23-25 August 2018.it was organized by India- Bhutan Foundation in collaboration with Siyahi, a Jaipur (Rajasthan) based Literary Consulting Agency. It has indeed become a key event of Bhutan and people have been enjoying it in good number every year.

The cultural festival provided an occasion to explore the rich cultural traditions, the path breaking writings, the ideas of learning through photography and so on. Those who contributed to the events at the festival included SonalMansingh, UshaUthup, Naseerudin Shah, Ajay Bose, Andrew Quintman,ValmikThapar, Daniel C. Taylor, Ratna Shah Pathak and many others.

A unique experience was to understand the many facets of the Royalty of Manipur through photography named Binodini. Similarly, the Songs of Milarepa, Beatles for Ever, Fab Four, etc. came up in discussions.

Colures of Rajasthan in Mountains

It was again a unique experience to see the Bhutanese people dressed in their traditional dress Ghao and Khira, eating Rajasthani food Dal, Bati and Churma with great taste. Similarly, the band of Assam singing the Bihu song. Actually, these are the events of expanding culture and music beyond the national boundaries. The Bhutanese music and recital of its only English band gave an idea about the richness of its culture. It was indeed a strong path to connect people together. Bhutan has rich traditions of Buddhist philosophy and the Lamaist traditions. The cultural festival provided an opportunity to learn about Bhutan’s contributions in this field.

An Exposer to Young Bhutani Scholars

The Bhutan Literary festival provided an opportunity to the young Bhutani writers and creative artists to interact with a host of out side scholars and discuss their works at the forum. Some of the young Bhutanese who took part in the literary festival included TsheringTashi, Gopal Acharya, MonuTamang, Chador Wangmo, KunzangChoden, the first Bhutani to write an Englishnovel,KenzongDorji, etc.

The young students have been attending these festivals and learning a lot about the outside world. A young student revealed that he heard about APJ ABDUL Kalam in one of the sessions of the festival and the read a book about him. There might be many more such experiences. This is indeed the real contribution of an event like this.

Bhutan forms a part of the fragile Himalayan ecology. The impacts of climate change are widespread in the Himalayas. Therefore, there is a need to make people aware about protecting the bio-diversity and environment of the Himalayas. What is more important is that much of the climatic conditions in the South Asian region are determined by the Himalayas. The Bhutan literary festival included environment as a subject for discussion. The message was clear that the environment has become a vital aspect of our activities.

August 20018 happened to be the time when India and Bhutan completed 50 years of diplomatic relations. Therefore, it was an opportunity to celebrate it on the occasion of the literary festival. No doubt it added to the colours of the festival. The Bhutan’s Ambassador to India, Gen. V. Nmagyal and India’s Ambassador to Bhutan Jaideep Sarkar conversed with DshoChewangNamgyal, Chamberlain to the King of Bhutan, in the opening session of the event. There is no doubt that India and Bhutan have enjoyed deep rooted friendly relations.

It can be said that it was a great occasion for the people of Bhutan to learn about their own cultural heritage and the cultural facets from across the national boundaries. No doubt it has added to the bonds of strong relations between the two countries.

The other countries of the region can learn from it and organize such events at both bilateral and regional level. India needs to take a lead in this regard.

High Cost Of Finance By Shraddha Ghimire 9 hours, 47 minutes ago