Living away from home since a very young age can be an exciting yet challenging experience. Away from the comforts of home, creating a space of your own in a novel place can be intimidating at the very beginning. The new place welcomes you with its people, making you the judge of who you wish to connect to and that’s your chance at creating a home away from home. 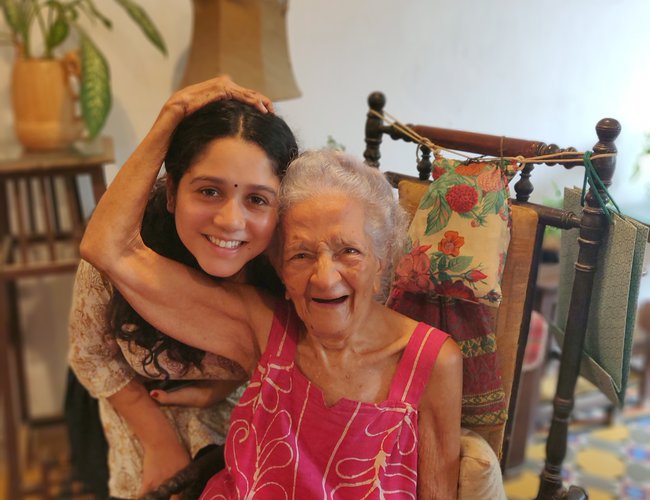 Living away from home since a very young age can be an exciting yet challenging experience. Away from the comforts of home, creating a space of your own in a novel place can be intimidating at the very beginning. The new place welcomes you with its people, making you the judge of who you wish to connect to and that’s your chance at creating a home away from home. Mumbai has been kind to me in this regard, by introducing me to some of the most incredibly inspiring people who have succeeded in making me a better human being. Out of all the people I met, my special encounter was with Nora Raymond who frequently welcomed me into her cozy house for hours of conversations alongside several cups of coffee.

My soft corner for the elderly people led me to Nora. The first time I visited her, she rolled her eyes and in a very serious tone, said to me that she would charge some fee if I wanted to sit and chat with her. I was a little confused until she laughed with her sparkling eyes, and wearing a big smile let me into the door of her beautiful old house. I had a special connection with that house too. The moment I stepped into it, I sensed a feeling of comfort and positivity. It contained innumerable stories about Nora and so many other people who were somehow linked to her life. Nora turned 97 last January and this justifies the endless stories she would tell from different aspects of her life. Born in 1921, she calls her-self the daughter of the Great Depression. She has lived through the era of the Second World War and has seen India gain its independence. Her schooling began at All Saints College, Nainital at the age of six while her dad was working for the British Railways. She enjoyed a simple, companionable upbringing and spent most of her early childhood days in Rajasthan in a friendly neighborhood in the company of her family consisting her parents, a sister and a brother. She recalls playing on the maidaan and is also grateful to her mother’s work ethics due to which the family ate off the land, fresh, organic fruits and vegetables. At the age of fifteen Nora learnt the skill of hairdressing from an English professor who at that time was lucky to be secure with a job, but soon after, as the Second World War broke out he volunteered for the army. To keep the business running and cater to the ladies who frequently visited her mentor’s saloon, the Ray Hairdressers was established with the support of her mother. Nora enjoyed her busy day at the saloon with her own sister as the co-worker. The formative years resulted in the genteel ladies working hard and playing hard- tennis, swimming and sometimes a hop, a dance at the US Club in Colaba to which they were escorted by their mother. She also offered her services as a hair dresser to the released prisoners of war from Burma. Broken in body and in spirits from the 3-4 years of starvation, they were given a small allowance necessary for clothes. The work responsibilities that she readily accepted and the different kinds of people she encountered at such a young age has shaped her into the wise and thoughtful woman that she is today.

Education for her has been about real experiences and so as she mentions her schooling was only up till the 8th grade, she also beautifully puts forth that she joined the ‘University of Life’ post that. She believes she has succeeded in growing as a well aware, intelligent individual because of her voracious reading habits and her openness to learning new things. She spends her time watching various shows on the television; from news to sports and some travel/ food channels too. She stays put on her chair during the tennis tournaments because of her love for the sport. It’s delightful to see how Nora is so prompt at saying it out loud when she does not agree to what being is said on the television. Sometimes she wishes to tweet but then she dreads the monster on her table that goes on and off without telling her. However, it’s the same computer that is keeping us close for now as we exchange mails until we meet again. Each day is a new beginning for Nora; as she keeps up with her daily routine of preparing breakfast for herself and practicing some acupressure, she also keeps herself engaged with the several fascinating interests that she pursues. I would often see beautifully crocheted scarves flowing across her chair as I’d walk in to see her or notice the new book she might be following. Sometimes she would wait with her freshly baked brownie that we shared over endless conversations about life. She is always thrilled with the new trends and is also so precise with her fashion choices despite the walker she may have to use sometimes when she steps out of her house. She is still giving out her hairdressing services to close friends and I bet she makes a mark as the oldest hairdresser in the world. Her other parts might be slightly older but I assure you that she is still very young at heart.

My weekly ritual of visiting her has made me a better person in the most little but significant ways and I have realized that each time I stepped out of her cozy house. She has taught me the value of simplicity and has encouraged me to be the best version of myself at all times. Her affection and kindness towards me has been so unconditional that each time I relive our memories I feel eternally grateful to her. Nora is a gem; beautiful and inspiring in ways I won’t be able to fully express. She will always be my home away from home!