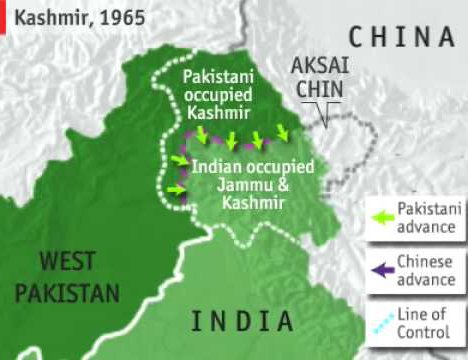 A new generation of Pakistan and India are stepping to claim Kashmir driven by nationalistic and religious fervor. They, like their parents and ancestors before them, think that their side can win this ever bloody violent contest. Trapped in the middle are the diverse people of Jammu and Kashmir. They have their own histories and their own dreams. Each side points to the violence and injustice of the other. Each side follows the sufferings, sorrows and pain of their own. Now in seeking to understand the conflict which is bloody and violent one that has consumed hundreds of thousands lives and caused incalculable human sufferings. So, the question is can one set aside the preconception, prejudice that one is inevitably born into. We do not know whether this question can be answered in the affirmative or not it is admittedly a very theoretical one. Surely it is of the great importance to let facts speak for themselves.

As this conflict is world’s hot and most intractable conflict. The road to understand lead inevitably to the city of Srinagar the heart of Indian ruled Kashmir. It is home to diverse people who have lived here for hundreds of years. Across the land the population is divided unevenly the Muslims being the overwhelmed majority in the Kashmir valley. The total population of Muslims, Hindus and Buddhists is approximately 10 million. It is often useful to set the stage for the essay in terms of numbers first which can then inform the discussion.

Who is Fighting whom and the Causes?

India and Pakistan have fought four battles over the issue of Kashmir. Both countries claimed Kashmir as part of their side. The Pakistan army took as an opportunity on the sufferings of Kashmir to wage proxy wars in Kashmir against India. The Pakistan’s army involvement and its intervention hithe red the secular aspect of Kashmir movement. Their strategy now to wage war by proxy. It was designed low cost way and to win Kashmir back is back the right word by bleeding India (Ali, 2007, p.14). Working with Islamic radical groups and their basis in Pakistan inside Kashmir the army used its secret intelligence agencies to recruit and train radicals and coined them holy warrior.

The Jihadis came from all over the Muslim world. Madrassahs and seminaries were used to recruit and trained these Mujahedeens. During Zia ul-Haq regime, this process was speeded up. They provided shelter to poor young people. They provided food, scholarships and also a promise to go to paradise. Many did go to fight. Some returned as heroes. This is how the Kashmir struggled became and identified as Jihad. Across the Pakistan, donation was collected and people were rallied and were pushed to raise the slogan “Kashmir will become Pakistan”. From a Pakistani side, Jihad used as a moving force to mobilizes young people to fight for Kashmir. From a Kashmir point of view, for decades, Kashmiris tried to change their fate with strikes in Indian occupied Kashmir and through the ballot box. They were frustrated. But in 1987 election were rigged. Candidates were arrested. Ballot boxes were destroyed and replaced with new one. Then their chosen candidates were declared winner. The election was turning point in Kashmir history.

By the Indian government, the police, and paramilitary forces were sent from all over India to prep up and installed new government. Many were viewed as illegitimate and corrupt. They were sent to suppress the voice of the unarmed people in the Kashmir valley. This is where the tension between India and Pakistan heated up and still going on.

Tracing the Roots of Religious Extremism: Pakistan’s Battle with Taliban

The question of Talibanization in Pakistan is not a new one. Today, when we look at Pakistan, we see tragic situations: one, there was a time when Talibans were considered the most important part of state. Two, what we see that these Talibans who identified themselves Tehreek Taliban Pakistan (TPP) have killed more than 70,000 innocent people within Pakistan. Recently, Pakistan army has launched an operation against the Talibans called “Zerb-i-Azab” in tribal area of Pakistan named Waziristan back in 2014. The Pakistan army has overwhelmed support from the civilian government as well as from the nation to suppress the Taliban threat. The Taliban has targeted the police, civilians and even army headquarter. Now here a striking question arises that why Taliban has become enemy to the country? After all they were considered the strong ally by the Pakistani establishment. To address this question, we have to go back to 1980s.

In Pakistan religion has been a driving force not for its independence back in 1947, but has been an ideological motivation to its identity around Islam. There has been so much emphasis on religion and state has patronage this doctrine. Because of the too much state emphasis, Islamic political parties strengthen their support from the population and the mullahs gained too much power in the society by using Islam and people’s sentimental association with it.

Education was used to indoctrinate state center interpretation of Islam. Much focused on ‘Militarization’, ‘Islamisation’ and ‘Jihad’ became the part of curriculum in Pakistan are perceived infidel and treacherous. The Hindus are considered eternal enemy of Pakistan. Furthermore, the religious political parties have used Islam as their card to pay with people religious sentiments and have publicly propagated the “doctrine of armed Jihad”. Consequently, intolerance has increased. Fatwa’s are issued by the fellow Muslims for the other sect of Muslims. Shias and Ahmadis have been persecuted by the state sponsored terrorist’s organizations such as Lash karey Jhangvi or Ahle sunat wal Jamat (AASWJ) is the most notorious one example. Resultantly, religious intolerance is deeply rooted in the society.

In 1979, the year of the Soviet invasion of Afghanistan is important to mention. Indeed, there may well have been no 9/11 but for this if this invasion would not be happened. Afghanistan was used as a base ground to tackle soviet advancement and Islamic international solidarity be sued as weapon. The task of creating such solidarity fell upon Saudi Arabia, together with other conservative Arab monarchies. This is how Afghan Jihad made as a central cause. This Jihad played two roles: First, they felt intimidated by the soviet. Second, it shielded the United States, their patron and ally whose direct confrontation with the Soviets would have been turned into nuclear war. Announcing Jihad was crucial as Saudi monarchy was under direct challenge by Iran which was pointing continued occupation of Palestine by Israel an ally of USA (Zaidi, 2010, p. 12). The jihad in Afghanistan provided an excellent outlet for the growing number of militant Sunni activists in Saudi Arabia, and a way to deal with the daily taunts of the Iranian clergy. The bleeders soon organized and armed the Great Global Jihad, funded by Saudi Arabia, and executed by Pakistan.

At the international level, Radical Islam went into overdrive as its superpower ally, the United States, funneled support to the mujahedeen. When Soviet troops withdrew from Afghanistan in the face of the U.S.-Pakistani-Saudi-Egyptian alliance in 1988, a chapter of history seemed complete. But Pakistan used these Taliban as its “strategic depth” and used them in Kashmir and in Afghanistan to play its proxy war. Later, these Taliban became threat to Pakistan when illegitimate military dictator Pervaiz Musharof made alliance with USA after 9/11 and its policy ‘war on terror’. During Musharaf times, Taliban came under threat and a chapter of war between Taliban and Pakistan started which is still going on.

Subedi is PhD Researcher in Sociology at Hallym University

127 People Die In Stampede After Soccer Match In Indonesia By Agencies 2 days, 7 hours ago

Putin Declares Annexation Of 4 Territories Of Ukraine To Russia By Agencies 3 days, 7 hours ago