The EIA report calculates only 1641.1 ha of forests for airport infrastructure development, which is 31 percent of the total area. In this area, 128,670 trees and 339,828 pole-size plants may be affected from project activities 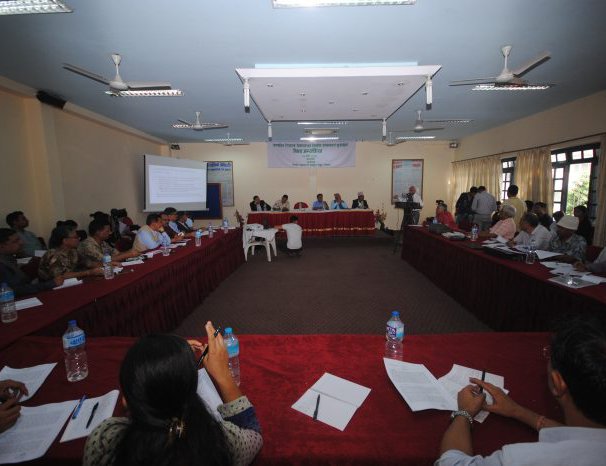 The Government of Nepal has placed the construction of the Second International Airport (SIA), at Nijgadh, Central Terai, east of Pathlaiya and south to the East-West Highway, in its priority to advance international connectivity and provide services to about 9.2 million air passengers by 2030. The proponent through the Ministry of Culture, Tourism and Civil Aviation (MoCTCA) have requested the Ministry of Forests and Environment (MoFE) to issue a clearance for cutting of 770,291 trees as part of site clearance and provide 2,556.2 ha of forest land in the first phase, out of the total area of 8045.79 ha of the proposed airport. News, views and concerns have been shared and raised in the recent days on the proposed implementation of Nijgadh airport in forests.

Conceptualised in mid-1990s and 'process expedited' recently, the then Ministry of Population and Environment (now MoFE) approved the Environmental Impact Assessment (EIA) report of this SIA in May 2018 for the whole area (8,045.79 ha) and nearly 95 percent of the total area is forest. The EIA report was prepared to, inter alia, identify, predict and evaluate the potential impacts of the SIA on the local environment, calculate the loss of land, property, forests and other resources, and recommend benefits, augmentation measures and preventive, curative and compensatory measures to minimise adverse environmental impacts. The EIA, as accepted globally, follows 'identification-prediction-evaluation' and 'avoidance-minimisation-compensation' approaches and also follows Nepal's legal procedures provisioned in the Environment Protection Act (1996) and Environment Protection Rules (1997). This Rule was enforced when the Current President of Nepal was the Minister for Population and Environment in 1997.

As per the approved EIA report, 'the total area required for the full fledged airport development to serve 60 million populations per year is 1900 ha' and US $ 6565 million is estimated for its full development. The Civil Aviation Authority of Nepal (CAAN) – the proponent of the SIA project – has prepared an EIA report. Interestingly, the report mentions 'though detailed feasibility study of the project completed in 2011, the report was not available for review'. It contradicts with the basic principles of the EIA.

On biological aspect, three types of natural forests (sal, terai-hardwood, and khair-sissoo forests) have been classified along with plantation area. A total of 754 samples (of 20x20m2, 5x5m2, and 1x1m2 sizes for trees, shrubs and natural regeneration respectively) were taken in 12 classified forest types covering about 7587.2 ha to estimate losses. In mid-1990s, this area was proposed for the implementation of the 'Operational Forest Management Plan' by ensuring biodiversity conservation.

The EIA report has mentioned the availability of 333 plant species, 23 species of mammals, 31 species of birds, and 10 species of reptiles with 22 endangered plant species in Terai forest of Bara district and dominance of 'use regulated plant species' such as sal, and some animal species having protection status.

During airport construction, 586,001 number of tress of over 30 cm dbh (diameter at breast height), and 1,864,820 pole-size plants (which totals to 2,450,821 plants) might be felled down. This number may increase or decrease as it is sampling-based estimation. Total value of the loss of forest products is estimated to nearly Rs. 524 crores based on royalty rate, and Rs. 6916 crores on market value which is over 13 times greater than the royalty rate. '

The EIA report calculates only 1641.1 ha of forests for airport infrastructure development, which is 31 percent of the total area. In this area, 128,670 trees and 339,828 pole-size plants may be affected from project activities. Loss of forest products for airport city as per royalty and market rates is NRs. 103 crores, and 1489 crores respectively. Unlike other EIA reports, this EIA report includes total economic values of the loss of forest area and it totals to NRs. 2 kharab and 31 arab (over NRs. 231 billion). This economic valuation considers the annual loss of carbon sequestration, oxygen release, production of non-timber forest products, and agricultural nutrients (organic matter, nitrogen, phosphorus and potassium). The EIA report has mentioned those losses (loss of forest area, forest products, endangered species, wildlife and habitat loss) as significant adverse impacts for the construction period and disturbance to wildlife for the operational stage of the airport.

The EIA report mentions alternative analysis but it does not consider 'location/project site', including other criteria as included in the approved Terms of Reference for EIA study. Environmental impact of 'with and without project' and 'within project' alternatives has been overruled. Qualitatively, it accepts the loss of large dense forest area, and could have ecological imbalance. It analyses more benefits from the implementation of proposed airport city by land pooling in the nearby vicinity than the original proposal of developing the city in the forests.

In order to address those significant adverse impacts, the EIA report proposes compensatory plantation @ of 1:25 and the proponent is required to plant 61,270,525 saplings, and manage for 5 years in its own cost. It has estimated 38,294 ha for plantation which is nearly 5 times more than the total loss of forest area (7969 ha) from SIA project and cost for such plantation, including land, totals to nearly NRs. 1398 crores. However, compensatory plantation for airport infrastructure (1900 ha) only is estimated at NRs. 267 crores. Furthermore, cost for forest clearance is estimated at NRs. 35 lakhs/ha. Total loss of forest land and its product (forest clearance, compensation to land, compensatory plantation, and construction of 3 office buildings for DFO) totals NRs. 2121 crores. During implementation, additional resources will be required for environmental monitoring, evaluation and auditing.

In a few cases, 'copying and pasting' has been noted. The report does not specify the adverse impacts of specific activity of the project and looks like 'programmatic EIA'. There are a few 'technical flaws'. Inclusion of a sentence 'the final report on EIA study of SIA was prepared incorporating the comments of SIAP, CAAN and MoCTCA ...' greatly questions the 'ownership' of the proponent over the report. Alternative analysis – the backbone of the EIA report – is technically 'poor'.

The CAAN official in the NEFEJ organised consultation on 14 September 2018 publicly agreed on the short-comings of the EIA report and boldly informed about 'no location alternative'. 'Clear ignorance' was indicated on the national and international commitments on forests and biodiversity conservation, including provisions of Article 14 of the Convention on Biological Diversity (1992) to which Nepal is a Party, and Section 9 of the Nepal Treaty Act (1990). Furthermore, Section 68 of the Forest Act (1993) empowers the government to provide part of any types of forest area if it satisfies 3 conditions: (i) national priority project; (ii) if there is no alternative other than to use forest area to implement the project; and (iii) if the project shall have no significant adverse effect on the forest environment. Nearly two and half decades of involvement in promoting EIA in Nepal made me realise the satisfaction of only first condition of the Forest Act (1993). The EIA report has not analysed the 'location/project site' alternative and has clearly mentioned 'significant adverse impacts' on forests. It means, the proponent has yet to satisfy later two conditions of the Section 68 of the Forest Act (1993) to implement the projects.

The EIA report – a legal document, approved by the competent government authority – has concluded to use 1,085 ha of forest land for the first phase as most appropriate option and proposes to develop airport city south of the proposed area where plenty of government land is available. The proponent has requested MoFE to expedite a process for cutting of over 7 lakhs and 70 thousands trees, and provide 2556.2 ha of forest land in the first phase. This contradiction questions the required forest area for the first phase. Also the question is how we could reduce the impact of the proposed project on forest resources and Nepal implements this Project based on national policies, strategies and legal provisions, and by complying with our international commitments on forests and species conservation.

Need for an international airport of ICAO standard is well realised. EIA is globally understood as a tool to make the development initiative sustainable. This tool is applied in all countries using 'customised' and/or 'prescriptive' approaches. Nepal has used the later approach. The beauty of the EIA process is that there is 'no secrecy' and it ensures public/stakeholders consultations. Based on the global practice, any project which is not related to the 'national security' may undergo EIA process.

In a nutshell, this project should not be an 'Arun III' (1993). One may consider the contribution of EIA in East Rapti Irrigation Project (1989). There are ways to implement and make this project environment-friendly and sustainable by complying with our national and international commitments on biological and other resources.

Upreti had been involved in institutionalising EIA system in Nepal for about 24 years. This article focuses on impacts of SIA project only on forests, and uses data and information of its approved EIA report. E-mail: upretybk@gmail.com

This Is No Time For Complacency. This Is A Time For Continued Vigilance By Dr Tedros Adhanom 18 hours, 37 minutes ago

Foreign Aid And Corruption By Dipak Gyawali 4 days, 19 hours ago

British Constitution During The Rule Of Padma Shamsher By Dr. Bipin Adhikari 5 days, 5 hours ago