"People First and Mission Always", a conceptual thinking and it aims towards creating, A Learning, Agile and Effective Organization. 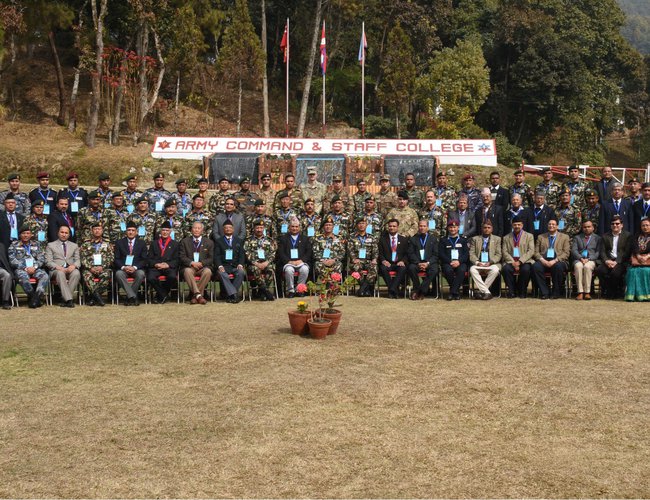 Let me … appreciate the initiative being taken by Army Command and Staff College over the years for organizing seminars on areas of interests to the security forces, political authority, government officials and general public. In the meantime, I also acknowledge the invaluable efforts put in by the academia to make the seminar both lively and fruitful.

The seminar primarily aims to develop a common understanding and thereby identify means and ways to strengthen the Civil Military Relation in present socio-political context of Nepal. Looking at the scope of seminar, I am very much confident that various concerns and crosscutting issues, both normative and pragmatic, which will be discussed during the seminar on this very pertinent topic, are going to be very interesting, informative and thought provoking, which in turn would guide the stakeholders in furthering harmonious civil military relations in the future.

As you all know, the national army of any nation is entrusted with the primary responsibility of protecting the national sovereignty and territorial integrity by defending the nation against external aggression. Besides that traditional role, the defense forces around the world have been increasingly involved in various operations other than war, such as disaster response, humanitarian assistance, nature conservation, national development etc. Security forces also undertake various national pride projects, which contribute to the national economy.

We should be mindful that most theories of civil military relations have originated from developed countries where the military is entrusted with traditional role but it may not be true in all instances even in the case of developed countries. However, in developing nations where the nation and its people are the primary beneficiaries, the states make use of motivated and committed personnel of national armed force and its material resources, for non-traditional roles.

Nepali Army is trained and oriented in conventional duties to perform their primary role, however it has equally been trained and professionalized in non-traditional role, mandated by the constitution.

Nepali Army's competence is amply evident from the responsibilities it has been regularly performing during crises and non-crisis situations over the years without jeopardizing the civil military relations and at the same time maintains its professionalism. For e.g. Nepali Army has been, presently, mobilizing mostly its engineering resources for the developmental work. At this juncture, I would like to reiterate that Nepali Army is committed in supporting the government objectives: Samridhha Nepal, Sukhi Nepali, (Prosperous Nepal, Happy Nepali) .

At this august gathering, I would also like to reaffirm that Nepali Army is strongly committed to abiding by civilian control. However, civilian control of the armed forces must be understood in a correct way and applied accordingly not to defeat the very essence and the purpose. History, reveals that the Army has always been loyal to regimes, and it has never obstructed the aspiration of Nepali people towards democratization of the country. Moreover, it is generally believed that all restrains, if any, exercised by the Army, in the past, have been done to uphold the existing national unity, foster political consensus, respect democratic practices and the constitution of the day.

In Nepali Army, Civil military relations form part of the Professional Military Education. Senior to mid-level officers of Nepali Army have been pursuing university degrees abroad, where civilian control is emphasized. Our interactions with the militaries of the developed democracies and our participation in peacekeeping missions 4 have also been shaping our outlook towards subordinating the military under civilian control.

Acknowledging the importance of Civil Military Relations, I have vowed to enhance the same in my Command Directive 2075. My command directive upholds the "People First and Mission Always", a conceptual thinking and it aims towards creating, A Learning, Agile and Effective Organization. I believe that all-round support that the Nepali Army receives to enhance professionalism of the military will ultimately help in furthering civil military relations. In the meantime, I would also like to assure everyone present here that I will leave no stone unturned from my side in furthering civil military relations in Nepal.

Writing of Sun Tzu and Clausewitz clearly demonstrate that war is the continuation of polity by some other means. However, professional military should disengage from politics so as to be effective. I, personally, believe that the military should be more assertive towards it's role and responsibilities and hence be restricted to professionalism. However, there is always the obligation of the military leadership to provide timely advice to the civilian leadership on issues of national security.

To sum up, I am sure that, this platform today will be able to create a solid understanding on the civil military relations in the present context, underpinned by various valuable ideas. Likewise, different positions and points of view expressed by academia, bureaucrats, former and serving military officers from different perspectives would hopefully further the knowledge and endeavor on contributing the concerned stake holders in the domain of civil military relations in Nepal.

Excerpts of the address by the guest of honor COAS General Purna Chandra Thapa on Civil Military relations: In present socio Political Environment of Nepal

It’s A Topsy-turvy World By Hemang Dixit 6 hours, 26 minutes ago

Fed Up With Federalism By Deepak Raj Joshi 6 hours, 28 minutes ago