Ambika P. Adhikari, DDes., who is a Principal Planner at City of Tempe, AZ, USA heading its long-range planning division, is a well known name in Nepalese Diaspora. Obtained Doctorate in Urban Planning and Design from Harvard University, and Master of Architecture from University of Hawaii, he is a Sr. Sustainability Scientist, a frequent Faculty Associate, and was a former Program Manager, and a former Research Professor at Arizona State University (ASU). In Nepal, he was Associate Professor at Institute of Engineering, Tribhuvan University, and Country Representative of IUCN (International Union of Conservation of Nature). He is a Fellow of American Society of Nepalese Engineers (ASNEngr), a Member of American Institute of Certified Planners (AICP), LEED Accredited Professional and has a certification as a Project Management Professional (PMP). Dr. Adhikari, who has authored one, and co-edited five books related to planning, environment and development. He is active in many Nepali community organizations in North America, spoke to New Spotlight. 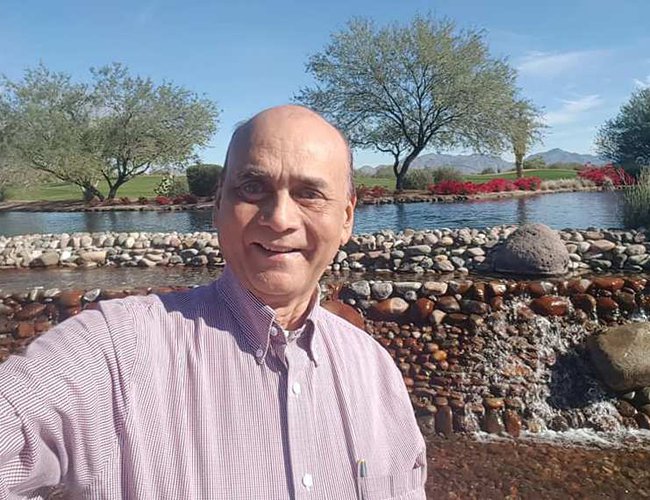 Since you have been travelling different parts of the world, how do you see the presence of Nepalese Diasporas?

The total number of Nepalis abroad in 2019 estimated to be around 4-5 million. Most are temporary migrants working in several countries including in the Middle-East, Malaysia, Korea, Cyprus, and Japan.

In the past several decades, many are permanently settled, or intend to settle in Western Europe, North America, Oceania. In addition, the number of Nepalis permanently settled in countries such as Japan, Singapore, Korea and Hong Kong is small but is growing. There are also significant number of Nepalis who live in Burma and Thailand, and a smaller number in countries like Fiji, Singapore and Malaysia for a long time.

My estimate for the number of this permanently settled group in foreign lands is about 1.3 million. In the real sense, this group can be called Nepali diaspora. Out of this, about 850,000, live in the Western Worldand other developed countries.

The above number does not include Nepalis living in India and Bhutan. For Nepal, I think it is a positive trend as the diaspora is a resource for the country.

How can the diaspora contribute to Nepal’s development?

The temporary migrant group working abroad for a defined period of time, sends money as remittance to Nepal. Remittance is a critical component of Nepal’s national income and in 2019, accounts for almost 30 percent of the size of the country’s Gross Domestic Product. The remittance amount also includes the money sent by Nepalis living in developed countries such as US, Australia and Canada and from Europe. Contrary to popular belief, a recent report shows that USA sends the largest amount of remittance to Nepal. This is due to the high income of workers and professionals who live in the US.

Since the establishment of Non-Residential Nepalese Association (NRNA), Nepalese Diaspora living in different parts of world hasan organized voice. How has the NRNA contributed to defend rights of the Nepalese Diaspora?

NRNA has worked hard in lobbying for the NRN citizenship, which was finally enshrined in the Nepali constitution of 2015. NRNA was also active in working with the Government of Nepal (GoN) in creating the provisions of the NRN and Person of Nepali Origin (PNO) card for the benefit of the NRNs. The NRN and PNO cards bestow several privileges to the card holders related to travel, living, working and owning of property in Nepal. These cards also help NRNs to travel to Nepal more frequently, invest there and help enhance the business activities in Nepal.

How have the Nepalese leaving in different parts of the world been contributing to Nepal?

The major areas where the NRNs have been helping Nepal include: financial investments, knowledge, technology and skill exchange and transfer, tourism promotion, supporting education programs, sending remittances, creating connections between Nepali and foreign business and organizations and lobbying for Nepali interests.

The diaspora group themselves are also important tourists in Nepal, who travel to many parts of Nepal and spend a significant amount of money each year in Nepal. They also promote Nepali tourism by posting images of their travel in Nepal in social media and popularizing the destination. This is a free, effective and targeted publicity for tourism in Nepal.

The bi-annual Global NRNA Convention in Nepal itself is a big event bringing some 1,500-2,000 guests to Nepal. The participantsspend a large sumof money while in Nepal for hotel, food, transport, shopping and tourism.

As another example, many diaspora members working in academic institutions in the developed countries have helped to forge important formal relationship between their institution inforeign country and Nepali universities.

An example of the initiative taken by the NRNS is the Nepal Open University, which was established in Nepal in 2016. A group of NRN academic leaders from Canada, USA, Australia and other countries spent more than seven years to make the establishmentof the NOU possible. They wrote the initial scheme for the university, drafted parliamentary bills, worked with the Nepali lawmakers, and political and academic leaders, worked with several foreign universities, and also mobilized initialfunding to create the platform for the university. It was unfortunate that while appointing the leadership in the university, the Government of Nepal did not appreciate the contribution of the diaspora members.

Nepal has been talking about the need to utilize the talent and resources of non-residential Nepalis. What steps has the Nepal government taken?

The Government of Nepal (GoN) has been a solid partner of the NRNA on many fronts. GoN and NRNA collaborate to hold the bi-annual Global Convention in Kathmandu. In addition, since 2018, the NRNA and GoN are also partnering hold a bi-annual global Knowledge Convention in Kathmandu, where hundreds of top diaspora experts from across the world converge in Kathmandu. The experts present new ideas, research findings and recommend appropriate policies for science, technology, energy and other areas that can work in Nepal. The 2018 Knowledge Convention in Kathmandu was a big success culminating in a paper that recommended several crucial policies to advance science and technology education and practice in Nepal.

More recently, the Nepali government has initiated a program “Brain Gain Center” to create an up to date and real time on-line repository of diaspora resources by professional and academic fields. The government of Nepal has also created useful regulations related to the Non-resident Nepalis, and supported Nepalis in need in the Gulf countries.

You yourself as well-known urban planner worked in different capacities in international organizations. Has Nepal government ever consulted you for any advicerelated to urban planning?

I work in the field of urban planning, design, environment, clean energy policies and economic development. Several years ago, I went back to Nepal and worked there for about five yearsfocusing on the environment, nature conservation and urban planning. Since I settled in the US more than one and half decades ago, I have been to Nepal several times organizing trainings in clean energy, and environmental protection. I have also done informal advising to interested groups on urban planning issues. Some local governments have also approached me for advice related to urban planning. As I prepare towards retirement, I expect to be more actively involved in helping Nepal in the field of urban planning, environmental management and community and economic development.

What are the problems Nepalese Diaspora have been facing?

Although not technically defined as diaspora, the temporary migrant workers in the Gulf, Malaysia, Korea and similar countries face several serious problems. They are paid low wages; their labor rights are marginal, and their safety and protection at work is often compromised. This is an area where the GoN, and NRNA and other diaspora groups need to work harder and provide more help and support to the NRNs there.

The diaspora groups permanently living in Western countries face a different type of problem. They want to be connected to Nepal with NRN Citizenship, and seek ease of travel and owning properties in Nepal. This is an area the GoN can help. In addition, some diaspora members living in the Western countries face other issues, such as domestic violence, safety at work-place and alienation. The local Nepali organization, and the National Coordination Councils (NCCs) of NRNA can be more active in supporting the local Nepali communities in their adopted lands.

Since you have been actively working in NRNA, how do you see the difference in the last 10 years on how Nepal treatsthe Nepalese Diaspora?

I have been active in the NRNA since its inception, but more so after around 2005. As a natural process of change, many new leaders with more energy and better vision are getting into NRNA. I foresee that the role of persons like me will be changed gradually, where we can perhaps provide advisory services when needed.

I think the GoN has been mostly generous to the diaspora groups. Still the NRNs are keen in obtaining the NRN Citizenship, and having clear and firm laws to protect their property rights in Nepal. Nepali government can be more proactive to make these things happen. Guaranteeing diaspora rights in Nepal will be a win-win for both sides.

The diaspora groups are also keen to give back to their native land. As more people in the developed world enter the retirement phase, I think there will be increased interest in the retiring group to connect more closely to Nepal, and provide voluntary services to Nepal.

How is the NRNA been playing a role to unite all Nepalese Diaspora under its umbrella?

The NRNA has been an important platform to bring all NRNs towards a common goal. There are 78 National Coordination Councils as of now, and the number is growing. The stage provided by the organization remains unparalleled. NRNA is almost like a mini UN system.

As a part of growing pain, we do sometimes read about divisions and groupism within the NRNA teams in the global and national scales. However, I believe these are temporary phenomenon towards a better adjustment of the organization of different interests. NRNA is a valuable organization, and we all must give what we can to strengthen it.

Japanese People Have A Special Sense Of Intimacy Toward Nepal: Ambassador Yutaka Kikuta By Agencies 1 month, 1 week ago