The new relationship, featuring development and prosperity and dubbed a 'trans-Himalaya' friendship, 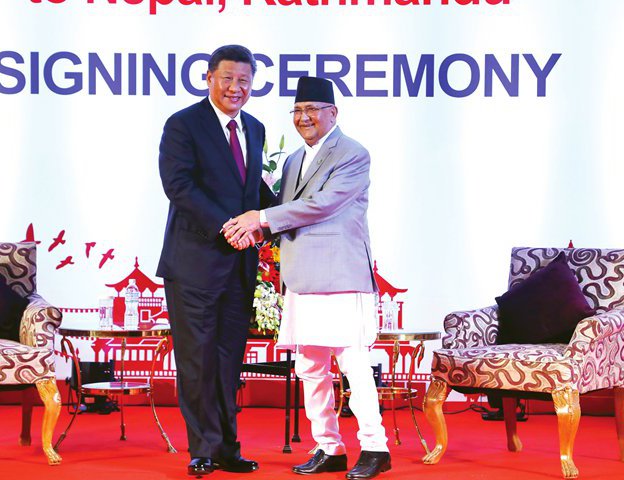 Chinese President Xi Jinping said on Sunday during his visit in Nepal that anyone attempting to split China will be crushed and any external force backing such attempts will be deemed by the Chinese people as pipe-dreaming.

Xi made the remarks during talks with Nepal's Prime Minister K.P. Sharma Oli, who said his country firmly supports China in safeguarding its sovereignty and territorial integrity and stands firm in upholding the one-China policy.

Nepal, added Oli, will never allow any force to use its territory for separatist activities against China.

Dai Yonghong, a professor and academic member of the China Center of South Asia Studies at Sichuan University, told the Global Times on Sunday that such a strong and clear signal sent by the Chinese top leader is a stern warning to not only Tibetan separatists, but also other separatist forces in Xinjiang, Taiwan and Hong Kong.

Given Nepal's special geostrategic position between China's Tibet Autonomous Region and India, the US-led West has been lobbying Nepal's certain forces to strengthen cooperation with the West so that the West can use Nepal as a lever in the US Indo-Pacific strategy, noted Dai.

The remarks made by leaders of China and Nepal are also a strong warning to the West not to exploit Nepal's geostrategic importance, Dai added.

Xi arrived in Kathmandu, capital of Nepal on Saturday afternoon from Chennai after an informal summit with Indian Prime Minister Narendra Modi. This is the first state visit by a Chinese head of state to Nepal in 23 years.

The Chinese president said he appreciated Nepal's firm adherence to the one-China policy, saying that China will as always support Nepal in safeguarding its national independence, sovereignty and territorial integrity.

During a bilateral talk between Xi and President Bidya Devi Bhandari on Saturday, the two leaders agreed to upgrade relations between the two countries to a strategic partnership of cooperation featuring ever-lasting friendship for development and prosperity.

Xi called on the two sides to consolidate the political foundation of bilateral ties, and set building of a community with a shared future as a long-term goal for the development of China-Nepal relations, according to the Xinhua News Agency.

The two sides should build an all-round cooperation pattern, carry out the construction of a trans-Himalayan connectivity network, and expand exchanges and cooperation in various fields, Xi said.

"The new relationship, featuring development and prosperity and dubbed a 'trans-Himalaya' friendship, shows that Nepal has realized that China is a significant partner that could help it realize its development prospects, especially economic development," Long Xingchun, a senior research fellow at the Charhar Institute and director of the Center for Indian Studies at China West Normal University, told the Global Times on Sunday.

In a joint statement released on Sunday, the two agreed to intensify implementation of the memorandum of understanding on cooperation under the China-proposed Belt and Road Initiative (BRI), to enhance connectivity in ports, roads, railways, aviation and communications with the overarching framework of trans-Himalayan Multi-Dimensional Connectivity Network.

Recalling a railway cooperation memorandum of understanding signed in June 2018, the two sides agreed to conduct a feasibility study for a China-Nepal Cross Border Railway.

As the countries further connect, trade and investment, post-disaster reconstruction, energy and tourism will also be further boosted.

In the joint statement, the two vowed to take BRI as an opportunity to deepen mutually beneficial cooperation in all fields in a comprehensive manner, respect each other's independence, sovereignty and territorial integrity, and core interests.

The two also reiterated a commitment to study the possibility of cooperation for the development of three north-south economic corridors in Nepal - Koshi, Gandaki and Karnali - in order to create jobs, improve local livelihoods and stimulate economic growth and development.

The two sides also exchanged and signed on Sunday a list of border management instruments, legal assistance on criminal issues and protection of Mount Qomolangma, known internationally as Mount Everest.

China is now Nepal's largest investor and second-largest trade partner. In 2018, trade between China and Nepal reached $1.1 billion, an increase of 11.7 percent year-on-year, according to media reports.

Kundan Aryal, press advisor to Prime Minister Oli, called the debt trap "propaganda" in an interview with the Global Times, saying that the "propaganda is not in place here in Nepal and we are not going to listen to propaganda like that."

Some people were trying to provoke it, while all the parties here have reached a consensus that Nepal wants to benefit from the BRI and people hope that they can benefit from a big economic power, Aryal added.

Act as a bridge

Experts noted China's cooperation with Nepal will contribute to the prosperity and stability of South Asia.

"To achieve its development goal, Nepal will need India's resources, but it will also need China. The BRI projects will be a historic development opportunity for Nepal, and the landlocked country could now link to the world through China's help," Long said.

Long further noted that China's good economic relationship with Nepal will not hamper India's interests in Nepal, as China also supports Nepal to keep a good relationship with India, Long said, adding that India and China can participate in the China-Nepal cooperation as much as possible.

In 2018, the leaders of China and India agreed to discuss the possibility of establishing a China-India-Nepal Economic Corridor to boost the development of the three countries.

In the context of the improvement of China-India strategic mutual trust, Nepal, neighbor to the two most dynamic economic powers in the world, can completely transform its geopolitical disadvantages into geo-economic advantages, Chinese experts noted.

Nepal can not only use the resources of China and India to promote its own economic development, but can act as a bridge between China and India, they said.

Weiduo is a Reporter of Global Times