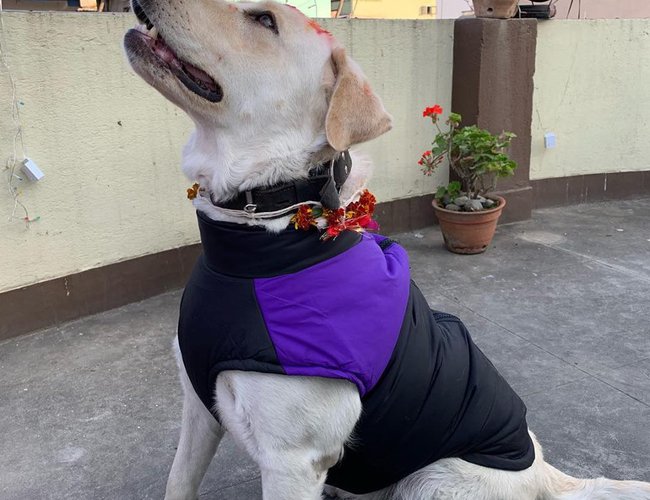 Hindus across the country are observing Kukur Tihar on the second day of their second largest festival that began from Monday with Kaag Tihar.

Today, dogs are worshipped and offered food. A dog is the most loyal friend to human beings and it is also regarded as the symbol of Yama, the deity of death.

Tihar festival, which is also called Yama Panchak or Deepawali is observed for five days. Also known as the festival of lights, people celebrate Tihar by lighting their houses with butter lamps.

Goddess Laxmi is worshipped in this festival. Also worshipped is Yama, the God of death, whose relationship with his sister is marked during the festival which has a special significance in fostering love and respect between brothers and sisters.

Today is also Gai Tihar and Laxmi Puja. On this day, cows are worshipped early in the morning and Goddess Laxmi is worshipped in the evening. On this evening, people celebrate with much enthusiasm by lighting their houses, singing, dancing and merry-making.

Likewise, a small hillock made out of cow dung (representative of Govardhan Parbat) is worshipped on the fourth day of the festival called Govardhan Puja. People from the Newar community celebrate the fourth day of Yama Panchak as Mha Puja (worship of oneself). The day is also the beginning of Nepal Sambat calendar.

During the festival, people decorate their houses with colourful lights, flowers and oil lamps. They also cook and eat various delicacies, including sweets and sel roti, a traditional Nepali food made from rice flour, in the shape of a ring.

The first day is called Kaag Tihar. On this day, crows are worshipped as the messengers of death. The second day (Sunday) is Kukur Tihar and Laxmi Puja. This year, Kukur Tihar and Laxmi Puja will be celebrated on the same day, according to Nepal Panchanga Nirnayan Samiti. In Kukur Tihar, dogs are worshipped as protectors of the house. A dog is the most loyal friend to human beings and it is also regarded as the symbol of Yama, the deity of death. Similarly, cows and goddess Laxmi are worshipped in Laxmi Puja in the belief that it brings wealth and happiness to devotees.

The Newar community will celebrate the third day (Monday) of Yama Panchak as Mha Puja (worship of oneself). Likewise, a small structure representing a hillock, made of cow dung (representative of Govardhan Parbat) is worshipped on the fourth day (Tuesday) of the festival called Govardhan Puja. The day will also mark Bhai Tika and the beginning of Nepal Sambat calendar.

In Bhai Tika, brothers receive tika from sisters and vice-versa. The auspicious hour for Bhai Tika is 11:55am, said NPNS. Also called the festival of lights, people decorate their houses with colourful lights, flowers, oil lamps and fancy electric bulbs during Tihar. They also cook and eat various delicacies, including sweets and sel roti. Similarly, Kija Puja (Newar version of Bhai Tika) will be celebrated on Wednesday.

Playing Deusi-Bhailo and worshipping various animals and birds as part of nature are significant aspects of this festival. The Ministry of Home Affairs, issuing a notice, has appealed to all to refrain from indulging in indecent activities while celebrating the festival. It has also imposed a ban on playing with firecrackers and organising late night Deusi-Bhailo. “Anyone found indulging in prohibited activities will be subject to punishment as per existing laws,” read a public notice issued by the ministry. The government has announced a four-day public holiday from Sunday to Wednesday.