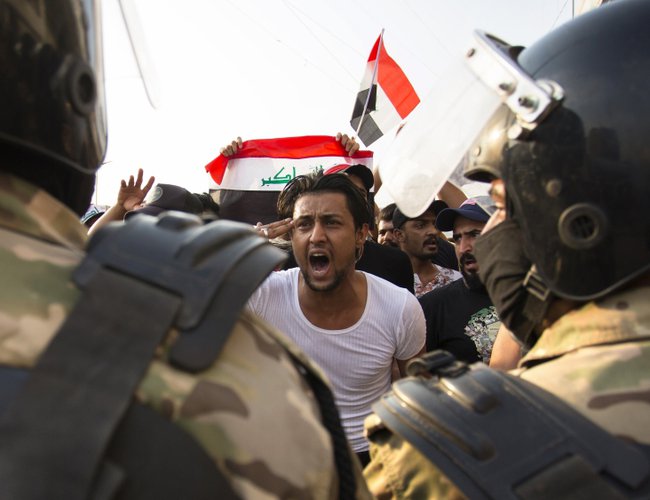 Iraqi Prime Minister Adel Abdul Mahdi issued a 13-point reform plan centered on subsidies and housing for the poor, as well as training and educational initiatives for unemployed youth.

The Iraqi premier posted his reforms on social media following an earlier cabinet meeting. Most Iraqis have been cut off from the internet and social media for several days now.

More than 200 parliamentarians arrived for an extraordinary session called by Speaker Mohamed al-Halbousi following a failed attempt to hold such a meeting on Saturday.

PM Abdul Mahdi meanwhile held marathon meetings with al-Halbousi, the cabinet, tribal chiefs and the country's top justices over the demonstrations, with his office's statements ins

Iraq has been rocked by days of protests, as thousands of mostly young men have been demonstrating in different parts of the country against corruption, unemployment and poor public services.

The mostly leaderless demonstrations are the biggest challenge yet to the year-old government of Prime Minister Adel Abdul Mahdi.

Iraq's top Shia cleric Grand Ayatollah Ali al-Sistani gave the Iraqi government a two-week deadline to find out which "undisciplined elements" had used snipers to shoot demonstrators, in an apparent reference to the Iran-backed militias who are accused of a role in the crackdown.

Al-Sistani "demands that the government investigate to find out which elements gave orders to shoot protesters, whatever their affiliation," a representative of the cleric said during a sermon in the holy city of Karbala.

Iraq's Prime Minister Adel Abdul Mahdi announced three days of mourning starting on Thursday for those killed in the protests, his office said in a statement.

At least 110 people have been killed and more than 6,000 wounded in Baghdad and in the south, since security forces started cracking down on demonstrators.

The dead include at least nine members of the security forces.

Access to social media sites remained restricted despite calm returning to the street of the capital.

For a week internet access in Iraq has been progressively limited. First access to certain social media sites disappeared, followed by internet connections for telephones, computers and even virtual private network (VPN) applications.

Cyber-security NGO NetBlocks noted that "the state imposed a near-total telecommunication shutdown in most regions, severely limiting press coverage and transparency around the ongoing crisis".

Providers told customers they were unable to provide a timetable for a return to uninterrupted service, information on restrictions, or any other details. Iraqi authorities have not commented on the restrictions.

Over 10 Reportedly Killed In Myanmar Protests By NEW SPOTLIGHT ONLINE 5 days, 3 hours ago