But India-Bhutan Relationship Can Be A Model For The world: Lotay Tshering

The Prime Minister of Bhutan, Lotay Tshering, chats about his plans and priorities 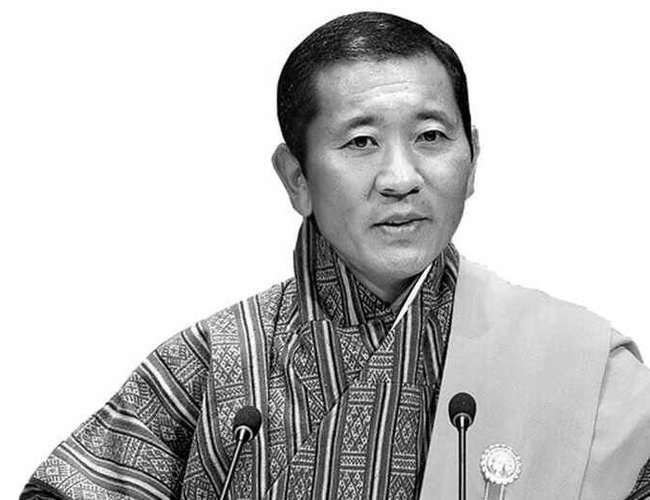 I am meeting Lotay Tshering, the new prime minister of Bhutan, two days after he hosted the Indian prime minister, Narendra Modi. Tshering had received Narendra Modi at the airport on the afternoon of August 17 and was back at the picturesque Paro International Airport the next day to see him off. The two heads of state had multiple engagements and India and Bhutan signed several MoUs and agreements during the high-profile visit — the first such since Tshering assumed office in November last year.

The interview is happening in the Prime Minister’s Lounge and despite the formal trappings — Tshering is wearing a traditional gho and kera (dress and belt) and a royal badge too — the 50-year-old looks visibly relaxed. But when I remark as much, he tries not to make much ado. He later concedes that it was indeed a very important visit, the past three or four weeks had been hectic, but all his Cabinet colleagues and government officials had helped him, and in the end it all went off very well.

The next few minutes are devoted to a recapture of his meeting with the Indian Prime Minister. Modi said he can do with very little sleep. Modi said he can eat everything offered, provided it is vegetarian. Modi said he is not on any medication. Modi’s spoken English is better than his — not quite true. Modi seemed to be very fit; he sprinted up the stairs to his aircraft.

Bhutan evolved from an absolute monarchy and went to polls for the first time in 2008. Tshering’s party, the left-of-centre Druk Nyamrup Tshogpa (DNT), contested elections for the first time in 2013. And Tshering, a very well-known and practising surgeon, joined the DNT that year. As part of his service obligations defined by the Royal Civil Service Commission, he had to cough up 6.2 million ngultrum (1 ngultrum equals 1 Indian rupee) before his resignation was accepted by the authorities at the Jigme Dorji Wangchuk National Referral Hospital where he was employed. But it was only in October 2018 that Tshering was named president of the DNT.

The Bhutanese people are by nature apolitical. I had occasion to meet Tshering’s predecessor, Tshering Tobgay of the People’s Democratic Party, when he was in office. But even by Bhutanese standards, Tobgay had come across as a political being.

The new prime minister is yet to grow beyond his doctor’s persona. He is charming and has a sense of humour but he is also guarded, open to engagement but politically correct to a fault. I tell him that a lot of people say he is a political greenhorn and he replies in an even tone, “You can call me a greenhorn. You can call me yellowhorn. You can call me redhorn… Fact is, I am who I am. And this is how I will always be.”

He continues talking about how he is gradually becoming aware of the challenges of governing a country. He tells me how as a surgeon, most things were under his control, and though as Prime Minister he has more power, he cannot control everything. “There are so many systemic issues… Earlier, my sole objective was to cure the patient. Now, I cannot worry about today or tomorrow, I have to think this year, next year, this generation and next generation. If any of my policy decisions go wrong, the people of Bhutan will suffer,” he says candidly.

As a little boy in rural Bhutan, Tshering would tell his parents of his longings to be a monk and help people in distress. In the years to come, his academic brilliance and eventual professional success took him down a different path. Tshering trained to be a doctor in Bangladesh — he speaks Bengali with a distinctive Bangladeshi accent — but he seems to have retained his spiritual core. So much so that when he talks about his political targets — mostly health-related — they sound like an impassioned mission outline.

Tshering and his Cabinet colleagues believe that material well-being is not enough and are committed to the cause of improving the gross national happiness or GNH — a measure of economic and moral progress that the King of Bhutan introduced in the 1970s as an alternative to gross domestic product or GDP. But while doing so, Tshering wants to refocus and realign priorities. He says, “There is the perception that the Bhutanese people are happy with less. That is not so. Bhutanese people too must keep pace with the rest of the world and development as the rest of the world knows it.”

The twin issues that are his priority are education and health. He wants to help the country’s youth pick up the necessary skills in science, engineering and technology and for all this, he says, he needs India’s help. “We live in the world of artificial intelligence, big data analytics… We have to change,” he states.

And then there is health. While Bhutan has seen major improvements in life expectancy, a reduction in infant mortality and the elimination of several infectious diseases, the number of lifestyle diseases — including alcoholism and diabetes — is on the rise. The DNT’s poll pledge was a promise to improve healthcare services, which to an extent explains why Tshering with his medical credentials, as party president, was considered such a great fit.

Tshering says, “I didn’t have any political ambition… My intention is to bring in some major shift in healthcare policies. Healthcare is free in Bhutan but there is a lot of room to improve the reach, which is the equity part, and then the quality of healthcare delivery.” (The Jigme Dorji Wangchuk National Referral Hospital is the only referral hospital in a country of 7.5 lakh people.) “If we can tweak the policy, maybe better healthcare services can reach the villages,” he adds.

I am told Tshering still makes it a point to stop at the referral hospital twice a week to either operate on patients or hold classes for resident doctors. “I may be the prime minister, but I will be equally happy, even happier if I am given charge of the health ministry,” says our man without batting an eyelid. (In the midst of all this, I learn that his wife too is a doctor, a psychiatrist, and a Salman Khan fan.)

Bhutan might no longer be an absolute monarchy, but it remains a constitutional monarchy. As far as the Bhutanese people are concerned, their destiny is in the safekeeping of their king. It is the monarch who decides on the roadmap of the country. Tshering too points to the badge on his gho — it has the image of the fifth king, Jigme Khesar Namgyel Wangchuk — and says, “The badge is here, but the king is inside my heart.”

From time to time he hails India’s democratic system. I take the opportunity to bring up India’s political concerns. I cite the NRC and Kashmir and the competitive politics that is the norm of the times and ask — surely, not everything about our democracy is worth emulating? Even as I am framing the questions I wonder how he will react.

Thus far, all questions have led to health or political correctness. (For instance, when I asked why Bhutan does not have a Chinese embassy yet despite all the neighbourly wooing, Tshering said, “We are not in a hurry. In terms of physical presence we may have only three embassies — Indian, Kuwaiti and Bangladeshi — but we have relations with 50 odd countries.”) This time too, true to character, Tshering replies, “India cannot be a model for Bhutan. Likewise, Bhutan cannot be a model for India. But India-Bhutan relationship can be a model for the world. Dua koiren… Please pray for us.” And so saying he signs off.