US Jet Crashed In Taliban Territory

US Jet Crashed In Taliban Territory 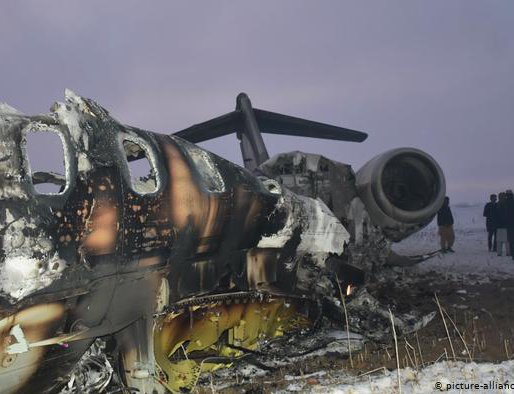 The US military has confirmed one of its planes crashed in eastern Afghanistan on Monday. Col Sonny Leggett said: "While the cause of crash is under investigation, there are no indications the crash was caused by enemy fire."

The aircraft crashed in Deh Yak district, Ghazni province, an area with a strong Taliban presence. It is unclear how many people were on board. Col Leggett denied Taliban claims that additional aircraft had crashed.

US officials confirmed a US military jet has crashed in the Afghan province of Ghazni, which is partly controlled by the Taliban, but denied it was shot down. Afghan officials initially spoke of a civilian airliner.

Following several conflicting reports as to what type of plane had crashed, US military officials confirmed the plane was a US military aircraft. However, they rejected the Taliban claims that the plane was shot down.

"A US Bombardier E-11A crashed today in Ghazni province, Afghanistan. While the cause of crash is under investigation, there are no indications the crash was caused by enemy fire," said Colonal Sonny Leggett, a US forces Afghanistan spokesperson.

The Bombardier E-11A is commonly used by the US Air Force for electronic surveillance.

A US official told Reuters news agency on condition of anonymity that there were fewer than 10 people on board the aircraft. Separatelly, a Taliban representative said that no crew members survived.

Bill And Melinda Gates Announce Divorce After 27 Years Of Marriage By Agencies 5 days, 9 hours ago