A Coronavirus Upsurge Could Be Devastating For South Asia

The evacuation of South Asian citizens from the Chinese city of Wuhan could expose a densely populated region to the coronavirus. Is South Asia prepared to deal with the possible spread of this deadly virus? \ 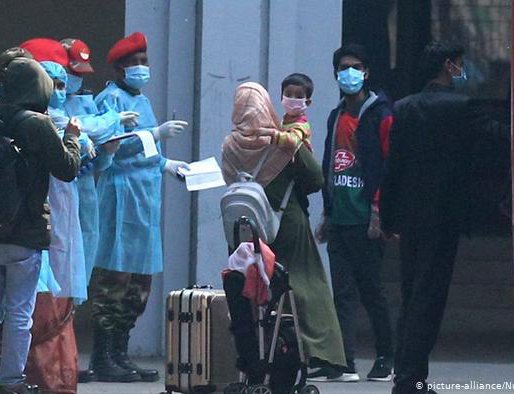 When the Philippines' Health Ministry confirmed that a 44-year-old man had died due to complications from coronavirus, it was the first death outside of China attributed to the virus. The man was from Wuhan, the epicenter of the virus in China, and had arrived in the Philippines on January 21.

The death in the Philippines shows the scale of problems faced by Asian countries when dealing with the coronavirus pandemic.DW Analysis

Coronavirus cases have been reported in a number of Asian territories, including India, Hong Kong, Japan, Macau, Nepal, Singapore, Sri Lanka, South Korea, Taiwan and Thailand, with at least 304 deaths and more than 14,380 cases in China.

Governments in these Asian countries are implementing measures to stop the virus from spreading any further, but they face many difficulties in containing the pandemic. Unlike Western countries that have a proper quarantine mechanism in place at airports and other places — and medical facilities available to patients — many countries in South and East Asia lack preparedness to tackle the situation. A possible spread of the coronavirus in these countries could prove to be catastrophic.

Although many Asian countries have placed a travel ban on the coronavirus-hit Chinese cities, infected people coming from other parts of the world could still pose a big challenge. Another major concern is the evacuations of these countries' citizens from China. While some governments have brought their citizens back, others are contemplating the consequences of such a move.

The evacuation of citizens from China poses a big challenge as well as an ethical dilemma. On the one hand, Asian countries can't just abandon their citizens in China, particularly in Wuhan, as their lives could be at risk there, on the other, bringing them back could expose a larger population to coronavirus as medical facilities in countries like Bangladesh, Nepal, India and Pakistan are not sufficient to deal with the possible virus outbreak.

India, for instance, evacuated its citizens from Wuhan on Saturday. Most of these evacuees are students, who were brought back to New Delhi by an Air India aircraft.

Arif, an Indian businessman who returned to his country from China, told DW the situation in Wuhan is worrisome.

"People are scared. They don't want to go to hospitals and are treating themselves at home for cold and cough. Chinese officials, on the other hand, are forcefully admitting people to hospitals," he said.

Another Indian citizen told DW on condition of anonymity that although the situation in Wuhan is alarming, other parts of China are not affected by the coronavirus: "The media is exaggerating the issue. I think that everything will be under control in the next days or a week."

India's neighbor, Pakistan, has decided not to evacuate its citizens from Wuhan, arguing the decision not to bring nationals home is in the country's larger interest.

"China has already announced that no Chinese citizen will go abroad without remaining disease-free for 14 days," Zafar Mirza, special assistant to Pakistani Prime Minister Imran Khan on health, told reporters on Saturday. "Today, I met with the Chinese ambassador in Islamabad and we agreed that the same policy would also apply to those Pakistanis who are currently in China."

"Mirza said that we are safe here. It is not true. We are really scared of the situation. All countries are taking measures to evacuate their students from China, but not Pakistan," Shaukat told DW's Urdu service.

Amjad Hussain, another Pakistani student in Wuhan, said evacuations needed to be properly monitored as per instructions by the World Health Organization (WHO).

It has not been proven that the face masks seen above can effectively protect you against viral infections. That said, these masks are probably able to catch some germs before they reach your mouth or nose. More importantly, they prevent people from touching their mouth or nose (which most people do instinctually). If you are already sick, such masks may keep you from infecting others.

According to The Lancet, a medical journal, most South Asian countries rank low in health care access and quality. For instance, in 2016, Bangladesh ranked 133rd, India 145th and Pakistan 154th in these areas. Therefore, the risk of deaths as a result of a possible coronavirus outbreak is very high.

"Our greatest concern is the potential for the virus to spread to countries with weaker health systems, which are ill-prepared to deal with it," said Tedros Adhanom Ghebreyesus, the WHO's director-general.

A Pakistani health official told DW that there are no laboratories in the country to test the latest form of coronavirus.

"The government is rightfully concerned and that is why it does not want to bring Pakistanis back to the country from Wuhan," he said.

According to the magazine Foreign Policy, several factors make South Asia more vulnerable to coronavirus than other countries. "First, many [of these countries] are among the most densely populated countries in the world. Literacy rates are low, general hygiene awareness is low, and access to clean water, gloves, and masks is limited. Private hospitals tend to be small and expensive, while government-run ones are mostly understaffed and unprepared for major crises.

The magazine pointed out that a man in Nepal tested positive for coronavirus after being released from medical observation. The region's media also fares poorly on most global surveys, making it unlikely journalists could raise awareness quickly enough or hold governments to account in the event of an outbreak, the magazine wrote.

While the containment of Wuhan virus depends largely on how Chinese authorities deal with it, experts have said its spread in other parts of Asia, particularly in South Asia, could become a problem in itself if their governments don't take proper measures.

One of the key reasons Ghebreyesus declared the coronavirus a global emergency was due to the spread of the virus in countries outside of China and that support needed to be given to countries with weaker health systems.

Bill And Melinda Gates Announce Divorce After 27 Years Of Marriage By Agencies 2 days, 17 hours ago

Russia Expels 10 U.S. Diplomats In Retaliation For Sanctions By Xinhua 2 weeks, 5 days ago