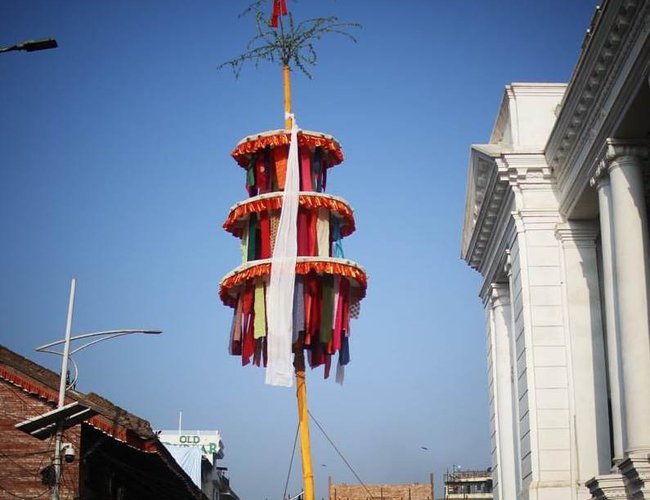 With the erection of Chir at Bashantapur, the Holi, the festival of colors, has formally started in Kathmandu valley.

Chir is the long bamboo pole having colorful cloth pieces hanging in three different circular layers. It looks like an umbrella. It is erected in joint effort of Manandhar community and government officials.

Every year 28 ft tall bamboo pole is erected at Basantapur, Kathmandu, Bhaktapur Durbar Square and Patan Durbar Square. This is done on every Falgun Shukla Pakshya Astami to mark the beginning of the century old ritual Holi.

Hindus all over the world including Nepal celebrate this festival of colors with great enthusiasm. However, the main celebration begins a week after the erection of this pole. This year it has been erected on March 3. It is believed that one should not mind getting wet or smeared with colors within this period until it is taken down.

Local people regards the erection of chir symbolizes the tree on which lord Krishna is said to have hung Gopini clothes while they were bathing in the Yamuna River in India.

r, a special kind of bamboo is used to erect Chir known as Bhalu bamboo. It is used due to its strength to hold three heavy wooden rings and its straightness.

As the pole is put up on the street at Basantapur, the festivities last for a week. However, the main day of Holi will be celebrated on March 9 in the hilly districts and on March 10 in the Tarai.

Holi is celebrated as a festival of reconciliation as revelers leave negative feelings like anger and animosity aside and put colors on each other’s faces. The festival also symbolizes the victory of good over evil. Named after the mythical demons Holika, it is a day when the festival of colors is celebrated.

This pole is taken down on the day of Holi and is pulled toward Thudhikhel. There it is burnt and Marwari community does their rituals walking circular around the burning fire. This bonfire symbolizes burning of Holika and victory over evil as per Hindu myth.

With the materials from various agencies

Swasthanibrathakatha To Conclude Today By Agencies 2 days, 1 hour ago