The debate of accepting and endorsing the Millennium Challenge Cooperation project from the parliament has resulted in the US conspiracy. India is more often held responsible for any political transformation or behavior. 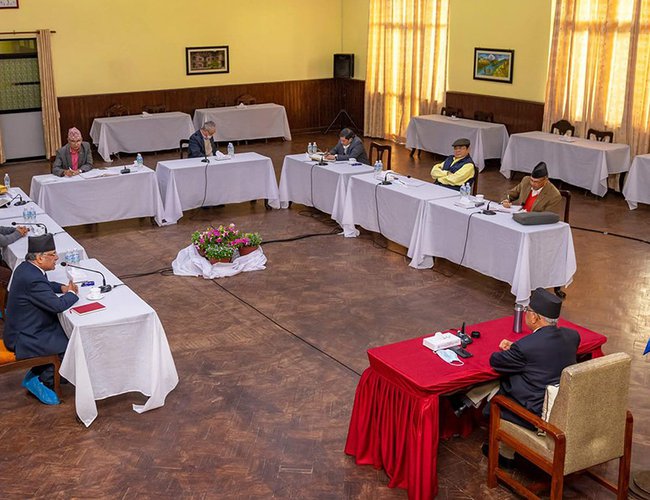 The ruling Nepal Communist Party (NCP) annoyance and discontent more than ever surfaced as soon as Prime Minister KP Oli persuasively approved the two Ordinances, which then within hours was promulgated by President’s decree. The ruling party’s Central Committee (CC) antagonism and resistance led to the withdrawal within a couple of days with own side’s narrative. The government took benefit of the COVID-19 crisis as the parliament was unable to perform. The internal vibrant of NCP and political instability has surpassed with important difference of opinion still on offer. The opposition the Nepali Congress (NC) and other political forces were unproductive to oblige their viewpoint.

The CC meeting of the NCP expressed their dissatisfaction almost a year ago in opposition to the Oli led government with a six-point memorandum questioning leadership manner, ideological intelligibility and lack of good governance nurturing anxiety about the future of a stable government illustrating for political instability. Political instability was occurring due to mismanaging governance in the three tier administrative system, leading to dissatisfaction amongst the opposition of the ruling party and ineffective opposition in the legislative.

One thing for sure is that the political prominent leaders see conspiracy theory in many political undertakings in Nepal. The debate of accepting and endorsing the Millennium Challenge Cooperation project from the parliament has resulted in the US conspiracy. India is more often held responsible for any political transformation or behavior. The Chinese President’s call to Nepal’s President and the door to door meeting with the prominent leaders of the NCP by the Chinese Ambassador has brought about Chinese meddling in Nepal’s politics at this juncture. The indications of the strong connection between the Chinese Communist Party and the NCP as well as the growing interest of China in Nepal and the South Asian region are greater than ever. Instead of holding accountable the foreign powers meddling in Nepalese politics, it is Nepal’s lack of political determination and stringent foreign policy.

Analyzing the past, current, present context and visionary context on political, economy, diplomatic, security, needs of the population strategic importance because of geography, one thing is that people had expectation that Nepal now will have political stability with economic growth, which was spelt out time and again by Prime Minister Oli has twisted to be a ‘planning fallacy’.

The country can be observed with three political strategic circumstances. Nepal was shifting with political stability, economic enhancement and matured diplomacy after the 2015 promulgation of the constitution and the enthusiasm by the people in the three layer election that occurred within few months. This could be assessed as an endorsement to the major transformation of the country to a republic, federal and secular though reservation is afloat. The NCP majority to almost two thirds in the parliament was taken with optimism. Second, is that the nation was looking for political unity and a cohesive measure together with the people’s participation to counter the COVID-19 that has affected the whole world, South Asia and Nepal; the ruling party’s division and urgency to address the political quandary preoccupied the important responsibility. Lastly, Nepal was visioned as a politically stable country with the major transformation, democratic practices and the Maoists and the Madeshi entering as a new constituted political force after the peace process for stability.

Prior and during the parliamentary election the United Marxist Leninist and the Nepal Communist Party Maoist formed an alliance with a directive to unite. Anti-India and nationalist slogans can be taken as a driving force and eagerness for the NCP to arrive with a total victory. People mandated a majority government after two decades. The NC, the other democratic parties like the Rastriya Prajatantra Party, Samajbadi Party and other newly formed political force have not consolidated due to their own internal political apprehensions, which positions the NCP with self-assurance.

Drifting after the election is the aspiration and hopefulness in the population with four premise one, new Nepal nationalism which was fashioned with more politics leading to measures to reduce Indian dependency and enhance self-determination, two, join hand with China for development and infrastructure as an alternative source, three, addressing the Madhesi issue with amendments in the constitution to promote favorable political environment in the Madhesh. Fourth, was a stable government that would govern full term. Nepal had witnessed nine head of governments in ten years with five constitutions in six decades.

The people yearn for stability, development, optimism and nationalism. Five main challenges stay put till today even after two and a half years in power, transitional justice and human rights issues brought about by the decade long conflict, second the unity of the ideologically different communists, three, politicalization of almost all establishments and institutionalized corruption, four, executive President vs. Parliamentary system of governance and lastly, the Madhesi issue and amendments of the constitution. The arguments and the contests were unable to come across an appropriate response and at the present surfaced as a national political predicament.

What has happened once Oli took the reign?

The intent of “Happy Nepali and Prosperous Nepal” with a vision for development and prosperity did not attain appropriate answers and is traumatized. The structural alteration with an intelligence bureau with cipher capabilities under the PM seemed the first step that will benefit informational capabilities on strategic issues that requires attending for national stability. Brining four bodies from three ministries under the Prime Minister Office was perceived as a contribution to the national security sector and national stability. Challenges exist but require to be addressed well through good hands. The focus is on anti corruption drive and financial arrangements for productive and desired development. Strategizing the intent and vision through different constitutional organizations, ministries and offices with three tier administrations is a question.

National security challenges are mounting. The political instability is mismanaging governance in the three tier administrative system that will lead to dissatisfaction within the ruling party and the country. The likelihood of the internal political differentiation yet again will afloat and lead to the split in the NCP or a mid-term election. Religious intolerance marginalized cultural and traditional values and the rise in unemployment will tempt social collision. The economic impact by COVID-19 will limit economic opportunities with the fall of remittance, international assistance; drop in tourism, policy deficit for mega projects, attraction of Foreign Direct Investment and domestic investment, industrialization and utilization of human resources. The Gross Domestic Product will be severely impacted. Politicalization rather than professionalization with protectionism and clientilism still prevails with as a serious long term consequences. The major powers interests is thriving and altering not only in Nepal that lies in between China and India but the whole of South Asia and the Asia Pacific. Comprehensible foreign policy and developed diplomatic dealing with great powers and two immediate neighbors is central to stay away from diplomatic failure. The security sector is so fundamental and imperative and keeping away from restructuring, revitalizing and revisiting the forces that perform will lead to a varied security cessation.

Where do you go from Here?

Nepal's major transformations and existing challenges will be at stake if strategizing the intent and vision through different constitutional organizations, ministries and offices with three tier administrations should be applied professionally with a four-fold strategy–Democratization, Development, Reconciliation and Human Security (DDRH) with a “Nepal Vision 2030”.

The four pillars of the government should encompass; one, strategic planning for development of infrastructure for economic enhancement, effective management and admirable administration, favorable and durable national foreign policy and lastly, efficient and agile national security system.

To answer the fields Nepal’s organizational structures, civil service components and security forces should be expanded, made professional and diversified to meet new challenges with anti corruption drive, good governance, national strategic planning, revisited and re-engineered national security sector, enforced law of the land, stable foreign policy, professionalizing all institutions through political guidance and political will. Dealing collectively, holistically and proactively through a strategic and cross-ministerial body bodies is the mantra.

Political trend should not change into political culture of political parties moving around with change of government though PM Oli just acquired temporary settlement. COVID-19 multifold impacts and the challenges are at a march-time with a probability of another political discourse in the coming months.