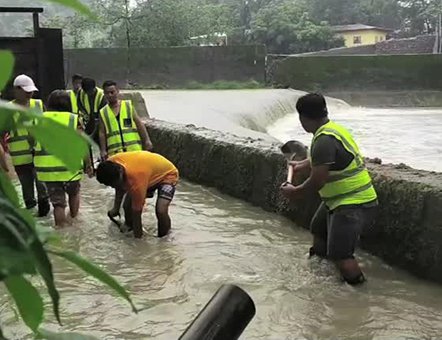 After the publication of reports by Indian media on the water stoppage by Bhutan to Assam, Bhutan’s Ministry of Foreign Affairs issued saying it is totally baseless and deliberate attempt by vested interest.

Different news outlets in India came the report that after aggression from China & Nepal, Bhutan stops the irrigation canal which was active since 1953 ignoring the interest of over 6,000 farmers on the Indian side.

The Government refuted recent reports in Indian media that claimed that Bhutan had blocked the water canals that supply irrigation water to farmers in Assam, India. Calling the news baseless in a press statement issued today, the foreign ministry said that it was a deliberate attempt by vested parties to spread misinformation and cause misunderstanding between the friendly people of Bhutan and Assam.

The foreign ministry said that this was a distressing allegation when Bhutan was making every effort to address all disruptions caused by the monsoon rains to the irrigation channels.

Concerned agencies and local volunteers in Samdrup Jongkhar have been engaged in maintaining the channels supplying water to Indian farmers downstream for the last three months, following the border closure and lockdown in India in wake of the COVID-19 pandemic.

There are 15 irrigation channels in Samdrup Jongkhar that supplies water to farmers in Assam.

"It is a deliberate attempt by vested interests to spread misinformation and cause misunderstanding between the friendly people of Bhutan and Assam," Bhutan's Foreign Ministry said.

Bhutan today rejected media reports claiming that it has stopped the supply of irrigation water to farmers in Assam, terming them "totally baseless" and a "deliberate attempt" by vested interests to cause misunderstanding with India.

In a statement, Bhutan's Ministry of Foreign Affairs said that since June 24, 2020, there have been several news articles published in India alleging that Bhutan has blocked water channels that supply irrigation water to Indian farmers in Baksa and Udalguri districts in Assam adjoining the country's Samdrup Jongkhar district.

"This is a distressing allegation and the Ministry of Foreign Affairs would like to clarify that the news articles are totally baseless as there is no reason why the flow of water should be stopped at this time," it said.

"It is a deliberate attempt by vested interests to spread misinformation and cause misunderstanding between the friendly people of Bhutan and Assam," the ministry said.

"Recent media reports about Bhutan blocking water supply to India has been incorrectly reported. The actual reason being the natural blockage of informal irrigation channels into Indian fields! Bhutan has been actually helping to clear the blockage," Mr Krishna said.

According to the statement issued on Facebook by Bhutan's Ministry of Foreign Affairs, Assam's Baksa and Udalguri districts have been benefitting from the water sources in Bhutan for many decades and "they continue to do so even during the present difficult times when we are faced with the COVID-19 pandemic."

The people of Bhutan, especially those living along the borders of India, "deeply value their age-old ties of friendship and cooperation with the people of India, particularly their close neighbors across the borders in Assam and West Bengal", it said, adding that such ties of friendship, cooperation and support must continue and be reinforced during these difficult times.

Since the lockdown in India and the closure of Bhutan's borders due to the COVID-19 pandemic, the Assamese farmers are unable to enter Bhutan to maintain the irrigation channels as was done in the past, it said.

However, understanding the difficulty that would be faced by the farmers in Assam, the Samdrup Jongkhar district officials and the general public have taken the initiative to repair the irrigation channels whenever there are problems to ensure the smooth flow of water to Assam, it said.

"The heavy monsoon rains and sudden rise in the water levels is posing serious challenges, but the Bhutanese authorities, including with heavy machinery, are on standby to clear any blockage and channel the water whenever there is a problem," the statement said.

Giving an assurance to the people of Assam, the ministry said that the Royal Government of Bhutan, particularly the Samdrup Jongkhar district authorities, will make every effort to ensure that the disruptions caused by the monsoon rains to the irrigation channels are addressed without delay and there is water available for the farmers in Assam.

"Bhutan would like to request for the understanding of the farmers in Assam as sometimes there could be few delays in the flow of water due to disruptions caused by the heavy monsoon rains and the operational difficulties arising from the restrictions put in place by both the countries due to COVID-19," it said.

The Samdrup Jongkhar authorities maintain close contact with their counterparts in Baksa and Udalguri, the ministry added.

Peak of India’s Covid-19 Second Wave In Sight By Agencies 10 hours, 52 minutes ago

India's Medical System Is Under A Strain As COVID-19 Infection Rises By Agencies 18 hours, 34 minutes ago

India Reported Declines In Active Cases For The Second Straight Day By Agencies 2 days, 9 hours ago

Increasing Calls For The Government Of PM Narendra Modi To Lock Down By REUTERS 4 days, 8 hours ago