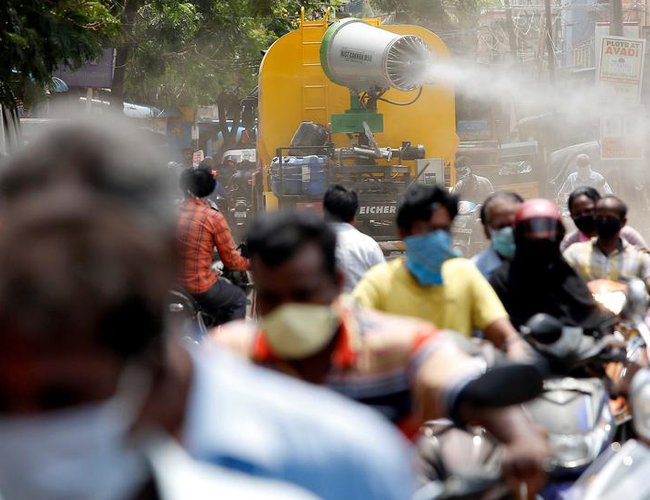 On Monday, India reported another record jump in COVID-19 infections, adding 28,701 new cases and pushing the tally to over 878,000.

Local authorities in several cities are reimposing strict lockdowns after an attempt to open up to revive an ailing economy. The new cases have raised the national total to 878,254, according to Johns Hopkins University data. Indian central health ministry also reported 500 more deaths in the past 24 hours, taking the total number of fatalities to 23,174.

Major cities like New Delhi, Mumbai, Chennai, Bangalore and Pune are among those witnessing a huge hike in infections. Several states have introduced weekend curfews and announced strict lockdowns in high-risk areas to slow down infections.

India has the third-highest number of COVID-19 cases in the world, behind the United States and Brazil.

COVID-19 tally in Gujarat state rose by 879 to reach 41,897. The southern state of Andhra Pradesh saw a new daily record of 1,933 cases. COVID-19 cases in West Bengal crossed the 30,000-mark with record 1,560 new cases, according to a report by the state health department. Several state authorities are now getting ready to reimpose lockdown restrictions for varying periods in more cities.

"This whole thing about the 'peak' is a false bogey because we won't have one peak in India, but a series of peaks," said Dr. Anant Bhan, a bioethics and global health researcher. Bhan pointed out that big cities like New Delhi and Mumbai have already seen surges and infections are now spreading to smaller cities as governments eased restrictions.

The actual toll would be unknown, he said, unless India made testing more accessible.

Many migrant workers and their families wait in line to get tokens to board buses that will take them to their home states amid the coronavirus pandemic. /Reuters

Currently, the average national recovery rate of India is 63.02 percent. But high risky areas like the southwestern state Kerala continued to witness a big surge in daily COVID-19 infections with 449 cases being reported on Monday, with a death toll of 33.

India's central health ministry said Thursday that the country was doing "relatively well" managing COVID-19, pointing to 13 deaths per one million people, compared to about 400 in the United States and 320 in Brazil. But knowing the actual toll in India is "absolutely impossible" because there is no reporting mechanism in most places for any kind of death, said Dr. Jayaprakash Muliyil, an epidemiologist at the Christian Medical College in Vellore who has been advising the government.

Official data shows 43 percent of the people who have died from the coronavirus were between age 30 and 60, but research globally indicates that the disease is particularly fatal to the elderly, according to Muliyil that's because many virus deaths among older Indians "don't get picked up" or counted in the virus fatality numbers.

Public health system is mainly operated at a state-level, where different measures are conducted with better or worse effects. Delhi, the state that includes the national capital, has been sharply criticized for failing to anticipate a surge of cases in recent weeks as lockdown measures eased. Patients have died after being turned away from COVID-19 designated hospitals that said they were at capacity, forcing the central home ministry to intervene and allocate 500 railway cars as makeshift hospital wards.

India's economy has largely reopened amid an obvious downturn since the beginning of this year. The International Monetary Fund (IMF) has projected a deeper 4.5-percent contraction for India in FY21 than earlier estimated, citing a longer lockdown period and slower than anticipated recovery. In the June update, the IMF has forecast a negative 4.9-percent global growth in 2020, 1.9 percentage points below the April 2020 estimate.

According to the IMF, India's economy is projected to contract by 4.5 percentage following a longer period of lockdown and slower recovery than anticipated in April.

With the easing up of the lockdown since early June, consumer activity has rebounded to pre-pandemic levels, government data showed, and factory workers who fled cities when India imposed its lockdown March 24 have begun to return, enticed, in some cases, by employers offering free room and board.

Given Indian economy was under struggle even before the COVID-19 outbreak, the quick fix is impossible. Nobody knows when the case will spike and how the curve of the coronavirus case changes. While fatality rates in India have been lowering a bit, experts warned that the pandemic's peak has not been reached as new infections are increasing.

India Categorizes Delta Plus Strain Of Virus As ‘Variant Of Concern’ By Agencies 4 hours, 45 minutes ago 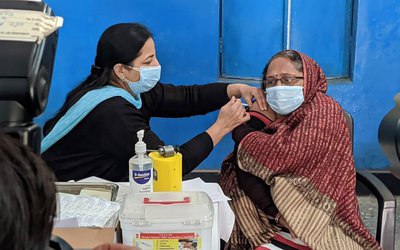 India Administer 82.7 Lakh Jabbed In One Day By Agencies 1 day, 4 hours ago