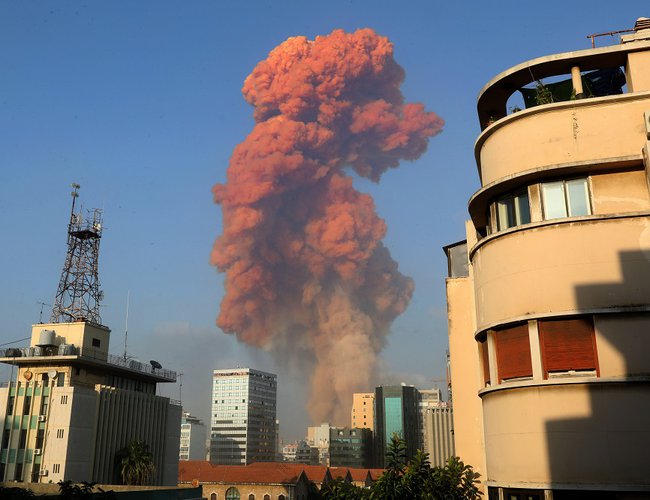 Interior minister says explosion at port appears to be linked to ammonium nitrate stored in a warehouse.

At least 78 people have been killed and nearly 4,000 wounded in a powerful explosion that ripped through Lebanon's capital, Beirut, leaving much of it a wrangled mess.

The United Nations Interim Force in Lebanon (UNIFIL) said one of its ships docked at the port was damaged in the explosion, leaving a number of its personnel wounded, including some in critical condition.

UNIFIL said it was transporting the wounded peacekeepers to the nearest hospitals and was assessing the situation, including the scale of the impact on its personnel.

"We are with the people and the Government of Lebanon during this difficult time and stand ready to help and provide any assistance and support," Major General Del Col, UNIFIL head of mission and force commander, said in a statement.

The massive explosion on Tuesday at Beirut's port sent shockwaves across the city, causing widespread damage to buildings and shattering windows even on the outskirts of the capital.

The cause of the explosion was not immediately clear. Officials linked the explosion to some 2,700 tonnes of confiscated ammonium nitrate that were being stored in a warehouse at the port for six years.

Prime Minsiter Hassan Diab promised that "what happened will not go without accountability".

Health Minister Hamad Hassan called for international aid to Lebanon, and a number of nations in the West and the Gulf have said they were willing to provide assistance.

The explosion left the port a wasteland; cars hanging from the mangled beams of warehouses, bent containers spread across roadways and a large ship listing onto the quayside. A health worker on the scene told Al Jazeera that he had seen at least 10 people dead near the explosion site, many left disfigured.

Helicopters circling the port area were trying to extinguish a large fire. Sirens filled the air.

Hospitals in the city were overwhelmed with wounded and turning those with non-serious injuries away.

At Hotel-Dieu hospital, itself left damaged by the explosion, dozens of people trying to enter were told to go elsewhere. "It's a catastrophe, a catastrophe," a man said in disbelief.

Inside the crowded lobby, a family got the news that their relative was dead. A young woman bent over in anguish, spread her arms open to an infant child and said "Youssef, dad is in heaven." An old man fell to his knees and smacked the ground, over and over.

Leaders across the globe offer support as Lebanese officials warn the number of dead and wounded is expected to rise.

World leaders have offered support to Lebanon following a massive explosion that killed at least 73 people and wounded more than 3,700 in the capital, Beirut.

While the cause of the explosion was not immediately clear, Lebanon's internal security chief Abbas Ibrahim said the site of the blast in the port area of the city was housing highly explosive materials.

The explosion released shockwaves through the city, flattening much of the port, damaging buildings and sending a giant mushroom cloud into the sky.

Hours after the blast, ambulances continued to carry away the wounded as army helicopters helped battle fires raging at the port. Officials expect the death toll to rise.