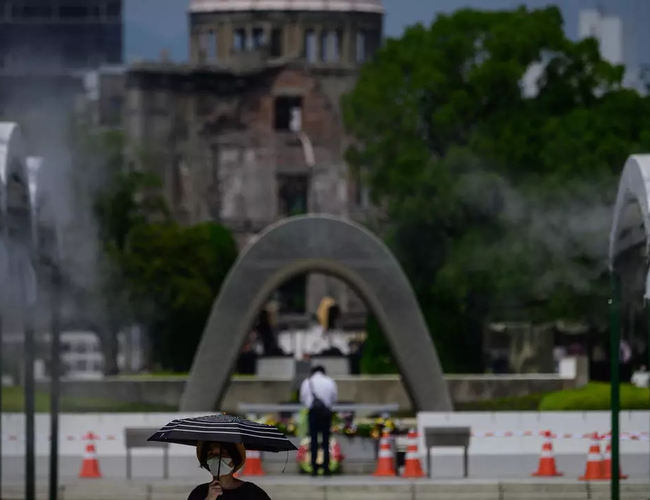 People in Japan are taking a moment to pause and remember the victims of a catastrophic event.

Seventy five years ago, an American warplane dropped an atomic bomb on Hiroshima. An estimated 140,000 people lost their lives by the end of the year.

While following safety measures in place for the coronavirus, the pandemic hasn't prevented people from reflecting on the tragedy and praying for world peace.

A 91-year-old survivor of the bombing said, "When you think about that time, it's tragic and cruel. This kind of tragedy should never happen again."

A man in his 50s said, "My parents are survivors . I've come here to tell victims that I will never forget them even though I haven't been able to do anything to abolish nuclear weapons."

About 800 people attended the Hiroshima Peace Memorial Ceremony including survivors of the bombing, known as hibakusha. They are getting older with their average age now over 83.

Representatives of 80 countries were also there.

Due to the pandemic, the number of people attending the event was limited to less than one-tenth of the usual.

Hiroshima Mayor Matsui Kazumi placed a list of the victims in a cenotaph. It includes the names of 4,943 survivors who died over the past year.

324,129 people are now commemorated in the monument.

The city fell silent at 8:15 a.m., the exact moment when the US bomb struck the city.

In the peace declaration, the mayor urged world leaders to work toward a security system that does not rely on nuclear weapons.

Matsui said, "As the only nation to suffer a nuclear attack, Japan must persuade the global public to unite with the spirit of Hiroshima. To enhance its role as mediator between the nuclear-weapon and non-nuclear-weapon states, I ask the Japanese government to heed the appeal of the hibakusha that it sign and ratify, and become a party to the Treaty on the Prohibition of Nuclear Weapons."

Nuclear powers like the US and Russia do not support the treaty. And Japan, which relies on nuclear protection from the US, hasn't signed it.

Prime Minister Abe Shinzo has maintained Japan will not join the UN treaty. He has said the treaty's goal of nuclear abolishment is the same as Japan's, but their approaches are different.

Abe said, "While adhering to the Three Non-Nuclear Principles, our nation will serve as a bridge between countries that take different stands and persist in urging dialogue and prompting them into action. By doing so, we will lead efforts made by the global community to realize a world without nuclear weapons."

The prime minister also said Japan will work to make the next review conference of the nuclear Non-Proliferation Treaty a significant one.

The meeting was due to be held in April, but postponed to next year due to the coronavirus pandemic.

A local high school choir brought the ceremony to a close with a song calling for peace.

People gathered in Hiroshima early on Thursday morning to honor the victims of the world's first atomic bombing.

They came out to share their wishes for peace at the monument in the Peace Memorial Park.

An man in his 50s said, "My parents are survivors. I've come here to tell victims that I will never forget them even though I haven't been able to do anything to abolish nuclear weapons."

The coronavirus has been hampering efforts to keep the memories of the tragedy alive as the survivors, known as hibakusha, get older.

A 75-year-old hibakusha said, "I was born in the year when the A-bomb was dropped. I'm scared that people's memories of the tragedy are fading."

A 91-year old survivor brought a photo of her husband, who died only three months ago. She remembers the tragic event of the bombing that happened 75 years ago.

Another 91-year-old hibakusha said, "When you think about that time, it's tragic and cruel. This kind of tragedy should never happen again."

Visitors also touched on the impact of the coronavirus pandemic.

A man in his 70s said, "I came early this morning as I heard that visitors are limited in entering the venue due to coronavirus. I know the pandemic is very important to care about, but at the same time I think it would be best if more people could come here to think about peace without any restrictions."

A man from overseas said, "I pray for the victims of the atomic bombing. Of course I think all countries should commit to ban nuclear weapons."

Japan To Tighten Restrictions On Arrival By Agencies 1 month ago

Japan Grapples With Record-level Increase In COVID-19 Cases By Agencies 1 month, 2 weeks ago

Prince Akishino Proclaimed First In Line To Throne By Agencies 2 months, 2 weeks ago