While conducting Focused Groups Discussion (FGD), we found out that between mid-December and mid-July 2019, there were 9 patients diagnosed with cancer. 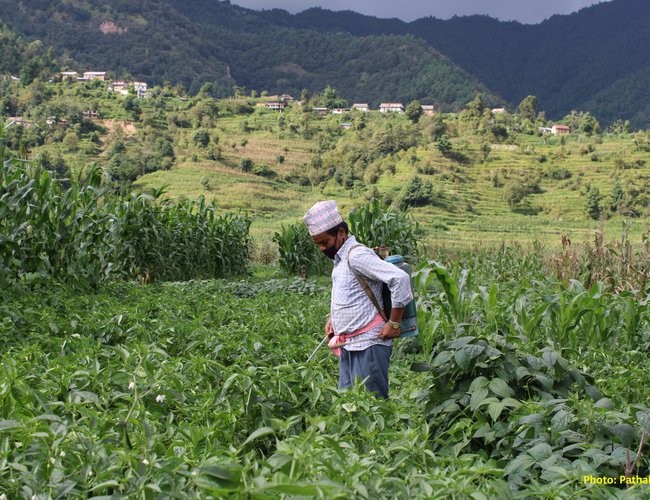 Nepal Water Conservation Foundation for Academic Research (NWCF) in association with International Development Research Commission (IDRC) of Canada is conducting research regarding Water Induced Disasters (WID) and the vulnerable population in some areas of Chitwan and Makwanpur and how to make them resilient enough to cope with such disasters. During one of the field visits at Palung Bazaar, an agricultural hub in Makwanpur district located nearby Kathmandu, we found out that the excessive use of pesticides is one of the major sources of pollution at the Kulekhani river which is a major source of drinking water for the local population downstream. Besides, pesticides have also adversely affected the local fish ecosystem which is a major source of livelihood for the local people. While conducting Focused Groups Discussion (FGD), we found out that between mid-December and mid-July 2019, there were 9 patients diagnosed with cancer. The locals feel that the rise in cancer-related cases has something to do with pesticides. One of the participants said,” Initially we used to spray lots of medicines. We even used to spray herbicides. But now after knowing the harmful effects of many pesticides, we use it in a controlled manner. We even wear protective equipment while spraying medicines”. 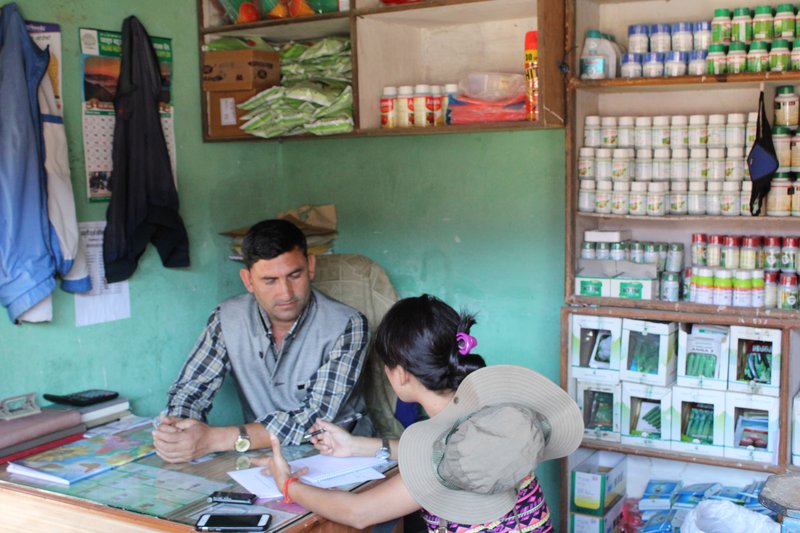 Yasodha Adhikari, a local social activist who advocates the use of IPM (Integrated Pest Management) at the locality said “The farmers who have their own land don’t want to destroy their land. However, the ones who have leased the land use excessive pesticides in order to earn money in a short period of time. Once the soil is destroyed, they move to another agricultural land”. However, because of those farmers, the whole image of the locality is destroyed. According to Niroj Pradhana local agrovet owner at Palung Bazaar, “Our agricultural products are in the same truck with other excessive pesticides used product. When they test the sample, the whole truck gets rejected.” He also indicated the issue of middlemen in local agriculture production. “The middle-men pressurizes the farmers to produce the product in the offseason in order to get huge profit. That is why they use excessive vitamins and pesticides”, he said.

Regarding wearing protective equipment, locals say that majority of them don’t use it. NirojPradhan said, “I sell protective equipment such as masks, gloves, and jackets as well. When I tell them to wear protective equipment, they think I am telling them to earn profit”. He said that most of the locals don’t use protective equipment, this may be one of the reasons for the cancer-related cases. Dr. Pratigya Bhandari a local resident doctor at Palung Primary Health Care Unit said, “Most of the pesticides related cases are related to the poisoning cases. Just a couple of days back, I had two such cases who consumed pesticides. I referred them to hospitals in Kathmandu. One of them died on the way”. Niroj Pradhan however denies this fact. “I mostly sell only small packets or bottles. Most of them are finished on the first spray only. If the bottles are finished, how will they be used again for poisoning?” he said. Regarding cancer-related cases, Dr. PratigyaBhandari said she has not witnessed any such cases. “Many cancer-related cases directly go to the hospitals in Chitwan or Kathmandu. They don’t come to us. This may be the reason why I don’t know such cases”, she said. She however couldn’t deny the fact that there are cancer-related cases increasing in the area. 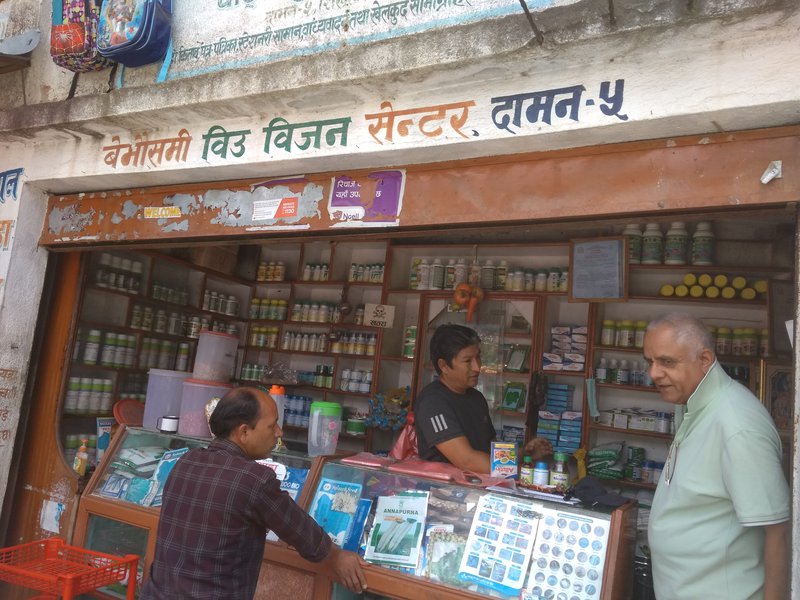 Excessive pesticide use has a negative impact on the local ecosystem as well. Sunil Tamang a representative of the local fish cooperative at Kulekhani said,” The population has reduced significantly in the past couple of years. This has something to do with the excessive use of pesticides in the agricultural field upstream which flows downstream through Kulekhaniriver”. Brigadier General SherBahadur Shah, Chief of Central Regional Military Command, Suparitar, Makwanpur also echoed Tamangs statement. He said, “More than 40 rhinos have died in the recent months which were not poaching related. The tusk was not removed. This has something to do with the contaminated river which they drank”. He was indicating at the use of excessive pesticides upstream which flow downstream. According to Mukesh Kumar Mishra, another agrovet owner from Palung, the farmers of Palung mostly use insecticides such as Nuvan, Alphamithrin, Cyppermitthin 25%. After spraying these insecticides, you should not pluck them for 15 days. He said the locals also use fungicides and various antibiotics as well. When these pesticides flow downstream through rainwater, it will contaminate the Kulekhaniriver.

There are however good practices prevailing in the district of Palung. The use of Integrated Pest Management (IPM) is one of them. The UN's Food and Agriculture Organization (FAO) defines IPM as "the careful consideration of all available pest control techniques and subsequent integration of appropriate measures that discourage the development of pest populations and keep pesticides and other interventions to levels that are economically justified and reduce or minimize risks to human health and the environment. YasodhaAdhikari, a local social activist says, “I have been practicing IPM for the last 6-7 years. Previously I also used a lot of pesticides. However, after knowing the harmful effects of pesticides through project training, I got a reality check. Now I use chemical fertilizers to a minimum possible limit. Otherwise, I use the juices made from local weeds such as Titepati, Banmara, Neem leaves. We have 60-70 members in the IPM group”. If the local or the provincial government comes up with a plan to make farmers stick with such good practice, then the horrific increment in the cancer-related cases could be reduced. Besides, based on this local perception that the rise in cancer-related cases has something to do with pesticides, it could be a starting point for scientifically analyzing such relations and coming up with a logical conclusion. 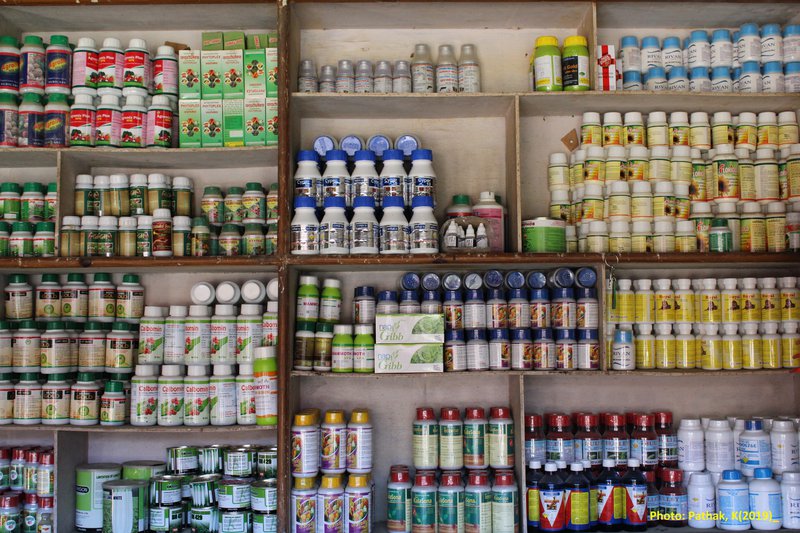 Why Upstream And Downstream Linkage In The River System Can’t Be Ignored?
Feb 19, 2021
Is The Lingering Of the Budhigandaki Hydropower Project The Sign Of Indo -Chinese Confrontation?
Dec 18, 2020
How Can The Problems Of Koshi Region Be Addressed Through A Nexus Perspective?
Nov 21, 2020
Addressing Water Security In The South Asian Region Through Nexus Governance
Sep 08, 2020
Why Nepal’s Policymakers Are Obsessed With Hydropower?
Mar 15, 2020

Youths In Nepal Elections: From Social Media To National Platform By Sangya Dhakal 1 day, 4 hours ago

Skeleton In The Sandook By Hemant Arjyal 2 days, 3 hours ago

An Overture Filled with Confusion By Dr. K. Uprety 3 days, 9 hours ago

How Could Rising Inflation Disrupt The Nepalese Economy? By Hari Prasad Shrestha 6 days, 6 hours ago