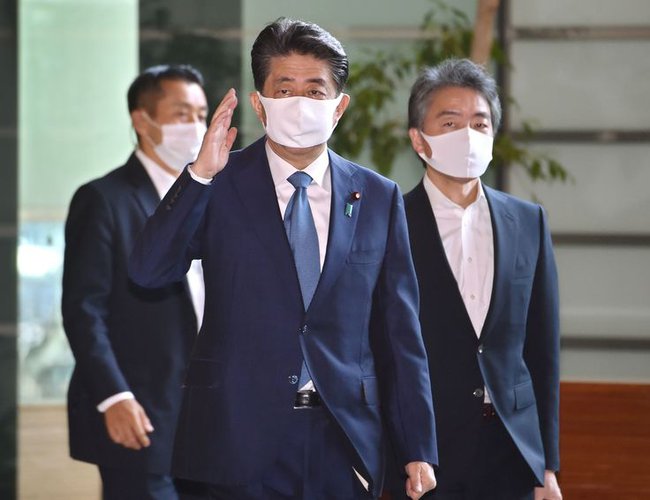 Japan's Prime Minister Abe Shinzo intends to step down to deal with a health problem. Abe has told his ruling Liberal Democratic Party officials of his intention to resign.

LDP officials and Abe held an urgent meeting at party headquarters to discuss the prime minister's decision . He has visited a hospital twice over the past two weeks, fuelling speculation that his health has deteriorated.

Abe has been busy in recent months -- working 147 days straight -- dealing with the coronavirus pandemic and natural disasters that hit parts of the country earlier this summer.

This is the second time that Abe is to leave the post over a medical issue -- stepping down in 2007, because of his inflammatory bowel disease, after only serving a year in office.

He returned to the top job in 2012 after a landslide election win in the Lower House. This seven-year tenure makes him Japan's longest-serving prime minister ever.

Abe rode a massive wave of support for his Liberal Democratic Party back into power in 2012.

Five years after resigning from the post, he had goals in mind.

His top priority was revitalizing the economy, under a policy he dubbed "Abenomics."

The country saw results, with stocks rebounding and employment going up.

Abe also led the nationwide campaign to host the Olympic and Paralympic Games in Tokyo.

It's a success the country still hopes to celebrate.

On the diplomatic front, Abe buddied up with US presidents.

He also aimed to conclude a landmark peace agreement with Russia, that's yet to happen.

It's never been changed since it took effect in 1947, and Abe says it's time.

But when he changed the government's interpretation of the Constitution, to include the right for collective self-defense, there was fierce debate.

And the prime minister was never able to start the process to change the historic document.

Abe led his ruling coalition to win six consecutive national elections, setting the stage for record-breaking longevity. Yet, allegations of corruption dogged him.

Starting in 2017, opponents threw out claims of influence-peddling - first tied to a land deal.

Then they accused Abe of using taxpayers' money to entertain constituents at an annual cherry blossom viewing party. But perhaps his biggest challenge was global.

The coronavirus pandemic undermined economic gains -- and forced the postponement of the Olympics.

China's First Rover Landed At Mars By Agencies 5 months ago

At Least 20 Demonstrators Killed In Myanmar By Agencies 7 months, 1 week ago

Japan To Tighten Restrictions On Arrival By Agencies 9 months, 3 weeks ago

Japan Grapples With Record-level Increase In COVID-19 Cases By Agencies 10 months, 1 week ago

Prince Akishino Proclaimed First In Line To Throne By Agencies 11 months, 1 week ago