Boons And Curses: The Legend Of The Mythological Mother

Mother and child is the basic unit of human society, rest all is socially constructed. Naturally, world of literature and art is replete with the energy and possibilities that such a primal source material provides.

Vedic and stories of our epics are such a fertile ground for an irreverent and playful examination of human situations. The effortless acceptance of emotions and desires, absence of narrow inhibitions and a general sense of abundance, decency and acceptance pervades this priceless repertoire. In worthy hands, these stories become the pure joy of effervescing of broad-mindedness imbued in natural understanding of the basic grammar of human existence. Yugal Joshi is a worthy raconteur of these grand stories.

Mother and child is the basic unit of human society, rest all is socially constructed. Naturally, the world of literature and art is replete with the energy and possibilities that such a primal source material provides. Shrewd selection of the theme "Boons and Curses: The Legend of the Mythological Mother" ensures a canvas pregnant with thrilling possibilities. Mention of mothers in Indian context carries the apprehension of cloying deference. This may overwhelm the individuality of a woman by the stream roller of motherhood. It is to the credit of Yugal Joshi that all mothers remain, strong vivacious women while serving his narrative schemes beautifully.

As a kid raised on Amar Chitra Katha and not so infrequent subscriber of Gita Press, your reviewer considered himself fairly well acquainted with the family trees and milestones of Indian mythology. However, to my surprise, I encountered many stories in this nicely written book that was hitherto not known to me. Rishis and sages and their role in the pantheon and mythology will be a huge take away of the book, though it is never pedantic.

Apart from the knowledge, this book has a very sensible cosmopolitan sensibility. It is tolerant and broad-minded. Large heartedness, not only about gender issues, is the hallmark of this unputdownable book. Yugal has hit the mark on the generosity and liberalism of Indian ethos. His paragraphs, especially in the second chapter on various moral and worldly issues display level-headedness which is not tainted by even a hint of parochialism. It enhances the pleasure of this deep but easy read. 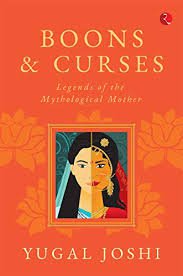 The reviewer was apprehensive about the use of the English language for a very Indian topic. Somehow, it is very rare to convey the nuances of Prakrit, Sanskrit and Hindi sensibilities in English with their complete ethos and flavor. To my utter relief, the book is an extremely easy read, effortlessly taking the reader from one theme to another, and transporting the reader to those ancient times with an enchanting wand.

Despite, all the strength of the characters, the Mothers of the book are players in a patriarchal setup. They are overpowering the masculine restrictions to achieve masculine objectives of power for their children, mostly sons. They are using their guile, sexuality, a force of personality and sacrifice within men's world and for men. They are using men, fathers, lovers, brothers, son and husbands to achieve their goals. This might appear jarring to few woke readers. However, this is not Yugal's burden to bear. He has taken up the valid field and period and has narrated that with the utmost sensitivity. His sensibilities are robust and generous. He is never a voyeur or an exploiter and still manages to tell a gripping story, this no mean achievement.

(Dhiraj Singh is Director, Publication Division and an author)

Here’s How Governments Can Reduce The Impacts Of Asia’s Devastating Flash Floods By Rabindra P. Osti 3 days, 14 hours ago

Make In Nepal By Hemang Dixit 4 days, 23 hours ago

Communist Party of China centenary celebrations Reading between the lips By Abijit Sharma 1 week, 4 days ago

Why Did The Private Sector Collectively Support The Nepal-India Railway Agreement? By Shanker Man Singh 1 week, 4 days ago