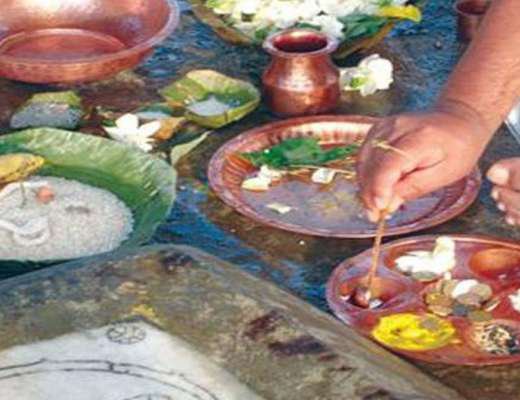 Soraha Shradha begins today. During the 16-day 'Pitru Paksha' people express heartfelt gratitude towards parents who are no more and ancestors.

Shradh or Pitru Paksha is a period when Hindus remember their ancestors by offering prayers. The 16-day period this year begins today and ends on September 17. 'Shradh' is a way of expressing heartfelt gratitude towards parents who are no more, for having helped them be what they are today. According to scriptures, rituals performed during 'shradh' bring peace to the departed.

The fifteen days of Malaya Paksha consists of 15 Tithi (also called Thithi). They are Pratipat, Dvitiya, Tritiya, Chaturthi, Panchami, Shashti, Saptami, Ashtami, Navami, Dasami, Ekadasi, Dvadasi, Trayodasi, Chaturdashi, Amavasya (new moon). According to Hindu mythology, every individual who wants to perform this Pitri Tarpan, they should do it on the same day of their ancestor died which will fall within any one of these fifteen days.

The performance of Shraddha by a son during Pitri Paksha is regarded as a compulsory by Hindus, to ensure that the soul of the ancestor goes to heaven. In this context, the scripture Garuda Purana says, "there is no salvation for a man without a son". The scriptures preach that a householder should propitiate ancestors (Pitris), along with the gods (devas), ghosts (bhutas) and guests. The scripture Markandeya Purana says that if the ancestors are content with the shraddhas, they will bestow health, wealth, knowledge and longevity, and ultimately heaven and salvation (moksha) upon the performer.

The performance of Sarvapitri amavasya rites can also compensate a forgotten or neglected annual shraddha ceremony, which should ideally coincide with the death anniversary of the deceased. According to Sharma, the ceremony is central to the concept of lineages. Shraddha involves oblations to three preceding generations—by reciting their names—as well as to the mythical lineage ancestor (gotra). A person thus gets to know the names of six generations (three preceding generation, his own and two succeeding generations—his sons and grandsons) in his life, reaffirming lineage ties. The shraddha is performed on the specific lunar day during the Pitri Paksha, when the ancestor—usually a parent or paternal grandparent—died. There are exceptions to the lunar day rule; special days are allotted for people who died in a particular manner or had a certain status in life. Chautha Bharani and Bharani Panchami, the fourth and fifth lunar day respectively, are allocated for people deceased in the past year. Avidhava navami ("Unwidowed ninth"), the ninth lunar day, is for married women who died before their husband. Widowers invite Brahmin women as guests for their wife's shraddha. The twelfth lunar day is for children and ascetics who had renounced the worldly pleasures. The fourteenth day is known as Ghata chaturdashi or Ghayala chaturdashi, and is reserved for those people killed by arms, in war or suffered a violent death.

The male who performs the shraddha should be take a purifying bath beforehand and is expected to wear a dhoti. He wears a ring of Kush. Then the ancestors are invoked to reside in the ring. The shraddha is usually performed bare-chested, as the position of the sacred thread worn by him needs to be changed multiple times during the ceremony. The shraddha involves pinda-daan, which is an offering to the ancestors of pindas (cooked rice and barley flour balls mixed with ghee and black sesame seeds), accompanying the release of water from the hand. It is followed by the worship of Vishnu in form of the Kush, a gold image or Shaligram stone and Yama. The food offering is then made, cooked especially for the ceremony on the roof. The offering is considered to be accepted if a crow arrives and devours the food; the bird is believed to be a messenger from Yama or the spirit of the ancestors. A cow and a dog are also fed, and Brahmin priests are also offered food. Once the ancestors (crow) and Brahmins have eaten, the family members can begin lunch.

The person who performs the 'shradh' invites the priest at home and performs a 'havan'. Rice and water are offered to the ancestors and this is called the 'pinda pradaana'. Since cows are considered holy by Hindus, food is also offered to them. The priest who helps with the rituals is given specially cooked food and treated with great care. The 'puja' concludes with giving 'dakshina' or a monetary donation to the priest.

Gita Jayanti 2020: Significance And Importance Of This Special Festival By NEW SPOTLIGHT ONLINE 3 weeks, 5 days ago