Rushan Abbas, an Uyghur American activist, staged a protest outside the Chinese Embassy in the United States on the second anniversary of her sister’s detention in northwestern China’s Xinjiang province 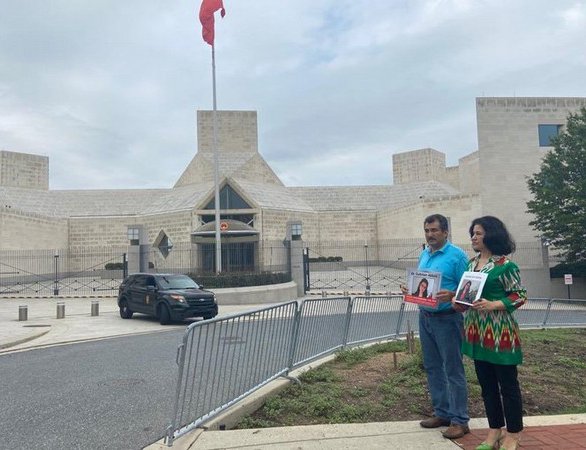 Washington [US], September (ANI): Rushan Abbas, an Uyghur American activist, staged a protest outside the Chinese Embassy in the United States on the second anniversary of her sister’s detention in northwestern China’s Xinjiang province.

Tagging Chinese Ambassador to the US Cui Tiankai in her Twitter post, Rushan Abbas demanded the safe and speedy release of her family members.

“Protesting in front of the @ChineseEmbinUS on the 2-year anniversary of Dr Gulshan Abbas’s extrajudicial detention and the detainment of 3 million+ Uyghurs in China’s camps. @AmbCuiTiankai, we demand the safe and speedy release of our family members! Give us proof of life!” the activist said.

In a recent video statement, Rushan Abbas hit out at Disney over its choice to film several scenes of the movie ‘Mulan’ in Xinjiang, saying it is tacit approval of the Chinese government’s brutal campaign against the Uyghurs.

Abbas, who herself is from Urumqi, the capital of Xinjiang, wondered whether the Disney crew passed by the concentration camp, where her sister is believed to be held by authorities.

“My own sister, a retired medical doctor has been detained since 2018. This week is the two-year anniversary of her disappearance. We have no news of her all these times. When I see the news about Disney’s Mulan, I cannot help but wonder if Disney crews passed by the concentration camp where she is being held,” she said.

Rushan Abbas has been living in the US since 1989.

China has been criticised globally for cracking down on the Uyghurs by sending them to mass detention camps, interfering in their religious activities and sending members of the community to undergo some form of forceful re-education or indoctrination.