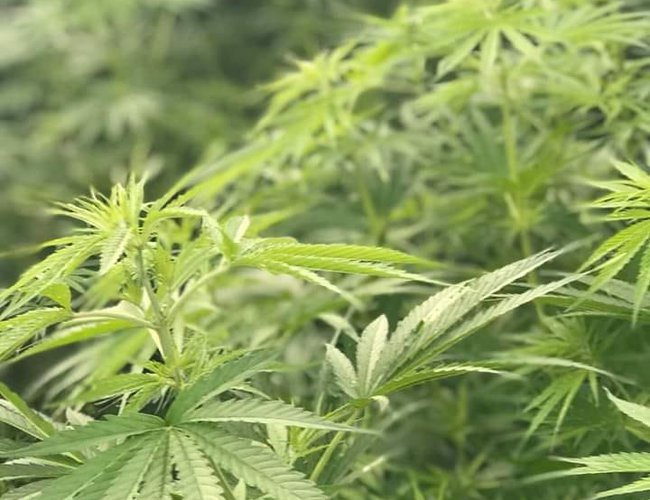 If ever proof was needed that water, which is life, is linked to everything, it came from Nepal Water Conservation Foundation's Pani Satsang on 3rd October focused on the proposed bill to legalize ganja (also going by names such as cannabis, marijuana, hemp, hashish and bhang). Over a year ago NWCF, supported by Canada government's research-supporting outfit IDRC, had begun a study with IWMI-Nepal and PEI on water-induced disasters and their impact, within the context of massive out migration, on the marginalized "left behind". As field investigations proceeded in the East Rapti watershed stretching from upper Makwanpur to lower Chitwan, it surprised us how ku-bikas issues (including rampant and unscientific road-building, pesticide pollution, ganja ban and other allegedly "development" initiatives) contributed to increased vulnerability of the marginalized poor during water-induced disasters.

At the Pani Satsang, local rural municipality representatives Nirmala Hingdung (vice chair Raksirang), Tanka Moktan (chair Kailas) and Hari Dallakoti (chair Benighat) as well as MPs such as Santa Bahadur Chepang (representing one of the most marginalized communities in the Rapti basin), Indra Baniya (of the Nepali Kangress who was also a former state minister of home affairs), Birodh Khatiwada (who tabled the bill) and Sher Bahadur Tamang (former EMaKe law minister unfairly Me Too-ed and edged out in inner-party tussle) were unanimous in voicing the need to legalize ganja.

Their concerns focused on how the ban has only harmed the poorest of the poor for whom ganja had been a traditional source of livelihood; how they have been criminalized and jailed while the big smugglers and traders have remained free to carry on its trade; how that has led to family hardships for the poor and breakup of families; how it has led to corruption in the police and civil administration; and how its widespread informal growing is a subject of unhealthy political vendetta at the local level during elections.

The history behind the ganja ban, its antecedents and consequences are stories in themselves. A traditional and widespread herb, it has been freely available in South Asian societies for medical, religious and recreational uses since time immemorial. Indeed, the names ganja and bhang are of old Sanskrit origin while cannabis comes from the Arabic kinnab. It was the British East India Company that realized it could make money by taxing its trade in 1856, although it is not clear how much that unfair legislation contributed to the Sepoy Mutiny in the following year.

Nepal banned ganja growing, trade and consumption on 16th July 1973 under pressure from the Nixon administration. At the time, the US administration itself was under pressure from the Watergate scandal as well as youth and Hippie counter-culture that was part of the anti-Vietnam war protests. Kathmandu was the Mecca for all Beatniks and subsequently Hippies because of the free availability of hashish and hence targeted by a "law-and-order" Nixon presidency.

Prior to the advent of the Beatniks in the 1960s (on Christmas 1966 – the year of my graduation from high school – an anarchic "international Beatnik convention" was held in Kathmandu's Tundikhel that declared: "Beatniks are dead; long live the Hippies!"), ganja was never an issue in Nepal as its use had been regulated by tradition, similar to vodka in Russia. Not all Russians are alcoholics (indeed how could they if they could resurrect themselves back from Soviet collapse as a super-power to be feared by the West?) because tradition decreed how it could be drunk. As its poet (if I am not mistaken, Chingiz Aitmatov) wrote: "It is not wrong to drink; one only needs to know why, when, with whom, for what and how much". The same could be said of ganja in Nepal and the rest of South Asia.

There are a couple of interesting accounts of the consequences of this ban.After it was enforced following US pressure, King Birendra, on his yearly Development Zone visit to Surkhet in the mid-1970s, was confronted by a delegation of Bajhangi elders. Their leader reached into his bakkhu pocket, pulled out some seeds and held it in front of the King, asking: "Do you know, Your Majesty, what this is?" He then proceeded to explain to the shocked King that they were bhang seeds from which they made oil for their cooking, achar to eat with their dhindo, clothes from its fibre, a medical supplement fodder for their cows, and the meagre cash from its sale to buy salt and clothes for their children. He then told the King: "This is our life; are you telling us not to live in your kingdom?" By then, the US pressure on the King – whose relations with the Soviets had soured by then – was so strong (and Nepal so aid-dependent on the US-led development agencies)that he was unable to help his poor subjects.

The ban did have more serious political consequences. In a USAID-supported survey of the Maoist insurgency in six west Nepal districts, including the Kham Magar heartland of Rolpa, Robert Gersony wrote a report (Sowing the Wind: history and dynamics of the Maoist revolt in Nepal's Rapti Hills, submitted to Vice President Nancy Lindborg of US-based Mercy Corps, 2003) tracing the link between this ganja ban and the alienation of the poor in these districts from the Nepali state. The loss of their livelihood and consequent impoverishment proved to be a fertile ground for Maoist recruitment.

Instead of learning the right lessons, Nepal not only went ahead with more police raids but also unthinkingly tied itself in 2003 to the UN Convention on Narcotics and Drugs that was Western values-led and not appreciative of traditional Nepali economy of the poor and spiritual culture or ecological concerns (naturally grown organic ganja is after all a high value cash crop that does not require irrigation or fertilizer). Ironically, following the establishment of Maoist-led Loktantra, pro-poor oriented approach to Nepal's rural economy gave way to a trading class favouring economic policy where the state came down even move heavy-handedly on the ganja-growing poor, especially during the last local elections.

Pratap Bista, a Hetauda-based journalist has written in Kathmandu Post (September 11) how, because of the inability of the current Marxist-Maoist government to provide fertilizer and market access to their vegetables due to the lockdown, farmers in Raksirang and Kailas rural municipality of the East Rapti Basin have gone back to cultivating ganja as the only option to ward off starvation. If the Maoist-led state police go back to destroying ganja crops after the easing of the pandemic lockdown, it may be sowing the seeds of yet another Maoist-type insurgency in the years ahead.

Sensitive to these grassroots issues, MPs Birodh Khatiwada and Sher Bahadur Tamang have registered a private bill in Nepal's parliament to legalize ganja. It won't, however, be tabled for discussion and voting unless they can convince their own party and government to carry it forward. While their initiative is commendable, the bill itself suffers major flaws(described below), which hopefully will be rectified by the process of healthy democratic debates inside and outside the parliament.

First, ganja is a medicinal herb like any other found all over the Himalaya, which becomes narcotic (as with many other drugs) only if mis- and over-used. Hence it should be treated as any useful herb and not inherently criminalized. Second, different ecological zones in the Himalaya have different types of ganja with differing strengths, properties and natural growth suitability. There is no need to specify in the proposed bill that only Delta 9 THC 0.2% ganja be allowed to be grown, since that leads one to suspect the handwriting of some big ganja dealer colluding with politicians. Third, the bill fails to recognize the multipurpose local use of ganja (e.g. fibre, food additives, livestock treatment etc.), and sees it only for its narcotic properties and international trade.

Fourth, the proposed bill is pro-rich dealers and anti-poor farmers as it is heavy on licensing with conditions impossible for small and mostly illiterate farmers to fulfill, and hardly facilitative enough. One cannot imagine an illiterate Chepang of Raksirang coming to Kathmandu or even Hetauda, filling multiple forms to have a permit issued to him. The bill also has too many "to be specified" provisions, indicating that not enough homework has been done to specify those points as any good law should. These centralizing (and not decentralizing) provisions would not only lead to heavy rent-seeking and corruption but, to actually fulfill its mission, eventually demand the creation of a separate ganja ministry!

The very West that forced this ban on Nepal is now legalizing ganja and countries like Canada are earning a lot of money from this useful herb. Indeed, even the US Senate majority leader Mitch McConnell is advocating the spread of hemp in his Kentucky state and asking for hemp masks to be promoted as the most effective against Covid-19. Given this changed international scenario, Nepali politicians will hopefully find the wisdom and the spine to do the right thing for ganja in its original home Nepal.