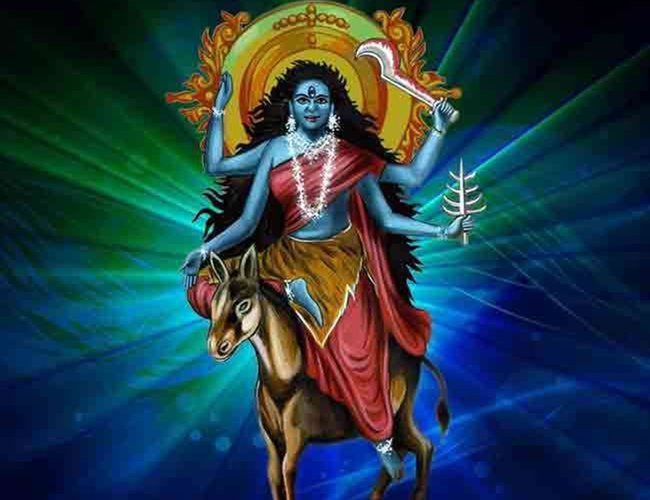 Today is the seventh day of the nine-day long festival of Navratri. On this day, Maa Kalratri, the seventh form of Maa Durga, is worshiped. On seventh day of Navratra, devotees pay obeisance to seventh reincranation of Goddess Durga, Maa Kalaratri. Saptami is one of the most auspicious days of the nine-day long festival. Maa Kalraatri is one of the fiercest forms of Maa Durga, known for her valour and courage. She is believed to destroyer of all demon entities, ghosts, evil spirits and negative energies. It is said that those who worship Maa Kaalratri are showered with true courage allowing them to overcome all obstacles and guaranteeing success in all undertakings.

Goddess Kaalratri is also known as Shubhankari, Raudri and Dhumorn. According to legends, Maa Parvati took the avatar of Maa Kalratri on the request of Gods. She went on to kill all the three demons-Shumbh NIshumbh and Raktbeej. Interestingly, the dead body of Raktbeej released blood, which was capable of producing millions of other Raktbeej. After realizing that it would be impossible to kill millions of similar Raktbeej, Goddess collected the blood and consumed every drop of it, so that no more Raktbeej can be produced.

Going by the legends, when Mata Parvati gave up her golden avatar to kill Shumbha-Nishumbha, she began to be called as Kaalratri. Maa Kaalratri's vehicle is a donkey and she has four arms, of which the top right hand is in Varada mudra and the bottom hand is in Abhayamudra, while the upper hand on the left side has an iron fork and the lower hand has a Khadag. This is avatar of Goddess Durga is said to be the most dangerous but also very auspicious.

According to expert, the problems of ghosts or any fears of the supernatural immediately goes away by worshipping Goddess Kaalratri. Saptami Tithi will remain till 6.57 AM today, after that Ashtami Tithi will begin.

There is a custom of performing puja and vrat on the seventh day of Navratri. The devotees who are observing fast should complete their chores in the morning and sit for puja with pure mind and body. Those who will be worshipping little girls on Durga Ashtami also observe their last fast today. Gather all the material required for Puja like perfumed water, Ganga Jal, dry fruits, panchamrita, flowers, lamp, incense sticks, rice, etc. Do the puja according to the procedure. Recite the Goddess Kaal Ratri mantra. Every mantra has its own significance and purpose. We are providing some important mantras which are required for Mahasaptami Puja.

On Durga Saptami of the nine-day long Navratri festival, one should offer jaggery or dishes made of jaggery to please the Goddess. By doing so, Maa Kaalratri removes poverty and brings happiness into everyone's life.