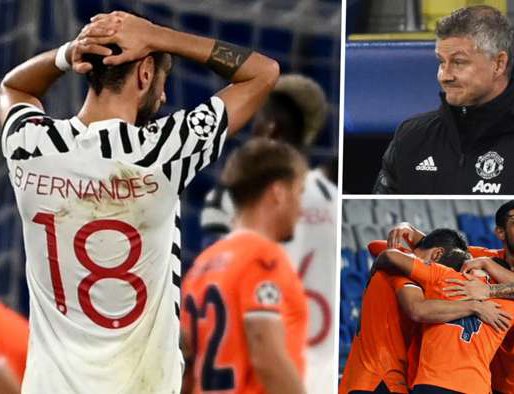 'Welcome to Hell!' used to be the message Turkish fans - namely those at Galatasaray - would use to welcome teams such as Manchester United to Istanbul in years gone by.

Although the atmosphere within football grounds now is more akin to the Garden of Eden, there are some United fans who would be happy to see their team comdemned to eternal damnation after an abysmal showing against Istanbul Basaksehir on Wednesday.

While the 2-1 defeat for United might not be terminal in terms of their hopes of qualifying from their Champions League group, it was another performance at both ends of the pitch that will have done little to ease the growing pressure on manager Ole Gunnar Solskjaer.

After defeat to Arsenal on Sunday, the knives were out yet again for the Norwegian coach, with the blame for United's inconsistent form starting to be laid at his door - but even his most ardent of critics will struggle to pin the responsibility on Solskjaer for the defending that led to Basaksehir's goals at the Fatih Terim Stadium.

Ex-United midfielder Paul Scholes described the passage of play that led to Demba Ba's opener as "like Under-10s football" in his role as a pundit on BT Sport, and even that might have been kind.

Not since Steven Gerrard was bemoaning the Anfield turf in 2014 has Ba had as much space to run in on goal and score, with the whole of the United team having been caught hopelessly up field despite the game being just 12 minutes old.

If that concession was comedically bad, then the second goal that followed was not much better as Juan Mata was robbed before Ba's dummy fooled three United defenders and allowed Edin Visca acres of space to fire past Dean Henderson.

The young goalkeeper, making his Champions League debut, was vocal in his dismay in the mess that was presenting itself in front of him, and he was right to be angry.

Roy Keane lamented the lack of leaders in the United side at the weekend, and again here there was a damning lack of responsibility being taken by United's defenders or senior midfielders.

Although United's failings at the back in the first half can be blamed on the players, their inability to get back into the game against an inferior team in the second is what Solskjaer will be called out for.

Having pulled a goal back shortly before half-time through Anthony Martial's header from Luke Shaw's cross, the Red Devils could muster just one further shot on target via a Bruno Fernandes free-kick.

While they dominated after the break, there was no precision in United's play in the final third, meaning they failed to really threaten the Basaksehir goal.

Paul Pogba and Edinson Cavani were given half an hour off the bench to make an impact while Mason Greenwood was also thrown on before the end, but the team were largely ponderous and lacking in imagination, with their failure to get in behind the defence a recurring theme of Solskjaer's management when facing sides who are defending deep.

The hosts must be credited for the way in which they saw the game out, and deserved their luck as Harry Maguire's looping effort was cleared off the line in injury time, but United will know this was a missed opportunity.

Their victories over Paris Saint-Germain and RB Leipzig in the opening two matchdays mean they still top the group at the halfway stage, but the two games against Basaksehir were meant to offer them 'easy' points. Instead they and Solskjaer will face yet more criticism.

Suffer a third-straight defeat away at Everton on Saturday, and hell might not sound too bad to Solskjaer as an alternative to the hostile environment he will find himself in.